Maddening as was the tie for fans of both sides, the 6-6 tie between the Seahawks and Cardinals was a compelling episode of sports theater that is worthy of serious appreciation. 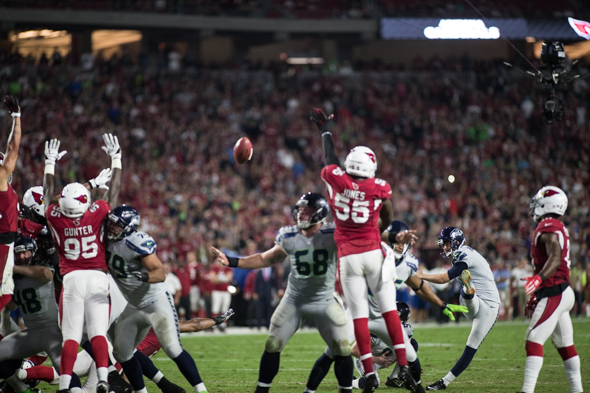 One of the great virtues of most sports — and why soccer still has trouble in the U.S. — is that the games provide resolution. The Seahawks and Cardinals Sunday night in Glendale, AZ, offered no resolution. Instead, they provided their fan bases and the sports nation watching on NBC with the unresolved — a tie.

It’s a thing America doesn’t do well. Win or lose, that’s our deal. The draw is our flaw; we can’t feel something for nothing.

After the 6-6 tie — the first in Seahawks history and the first in the NFL in 44 years that didn’t have a touchdown — nobody sputtered better than Pete Carroll.

“I don’t know where a tie fits,” said the Seahawks coach, a garrulous man suddenly tangled up in awkward pauses. “I don’t really have a good place to make sense of this. We don’t live this way.”

Most of us regularly have unresolved issues with our spouses, children, parents, bosses, auto mechanics, internet service providers and presidential candidates. But not a sports event. In sports, we invest invest hours, days, weeks, even professional lives, knowing that sports will give us something rarely obtained elsewhere — resolution.

Even Seahawks QB Russell Wilson was moved as close as he’ll ever get to contempt.

OK, so he wasn’t Jesse Jackson raging at The Man. But a tie leaves every thread at a loose end. How do you wear that?

It was maybe the most fascinating pro football game I can recall.

Wash off your green and blue face paint and go with me a minute.

The game between two of the NFL’s best coaches was an ultra-conservative chess match between division rivals who had each given the other previous heartaches. And for all the missed opportunities, failed plays and penalties, there was neither a fumble nor an interception, although it was nearly so several times.

How sloppy can a game be if it had no turnovers?

In my most dystopian nightmares about football, I never could have dreamed up such a thing.

Yet there it was, played out through nearly four hours of exquisite tension. No cinematic art could rival the wall-to-wall drama in live action where something that was anticipated to happen (a touchdown) never did. It was like watching a man and a woman intensely attracted to one another, yet never kissing. You can’t look away because it might happen.

Then consider the magnificence of both defenses. For every possession in regulation, each had a ruthlessly jarring answer for the offense. It cannot be a bad football game when half of it is populated by premier athletes operating at the acme of their profession, yet were unable to shake loose the ball even once.

And then the Seahawks execute the astounding special teams feat of having LB Bobby Wagner jump over the center to interrupt a field goal.

After getting  the first one blocked, the Cardinals still couldn’t prevent Wagner flying into the vision of Cardinals kicker Chandler Cantanzaro for the attempt in overtime. There is little doubt Wagner’s airborne presence affected the kick.

Consider the stricken head coaches at each moment of despair when the kicks failed. Arizona coach Arians threw his arms high, anticipating the game-winning score, then threw them down so hard he may need rotator cuff surgery.

And how about that look on the face of Carroll after Stephen Hauschka missed? Frozen by shock, jaw slackened, eyes wide . . . for as much success as Carroll has had, and as much energy and enlightenment he has brought to the Seattle sports marketplace, his expression in that moment is burned into my brain until one second past forever.

For each team to run the field in overtime to set up a game-winning field goal, only to scuff the kick . . . well, it doesn’t get more American than a double Charlie Brown.