The Seahawks offense looked desperate before LT Bradley Sowell went out with a knee sprain Sunday in Arizona. Now they may have to break in George Fant, who never played the position until spring. 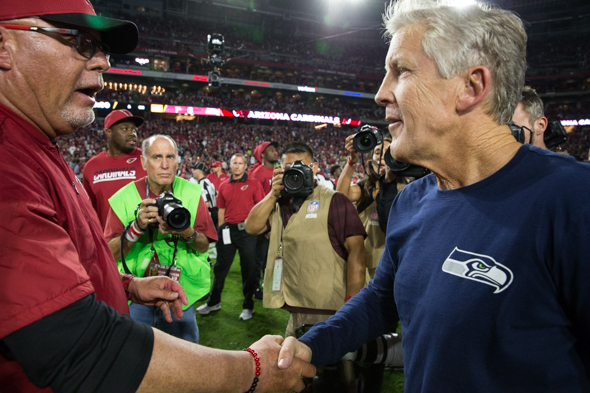 No word on whether Bruce Arians and Pete Carroll talked about paper/scissors/rock to break the tie. / Drew McKenzie, Sportspress Northwest

For a Seahawks team that Pete Carroll said three weeks ago has a chance to be his best, it didn’t take long to get to “desperation.” Carroll invoked the word Monday to describe why the Seahawks had five offensive holding penalties that helped kill drives in the excruciating 6-6 tie with the Cardinals in Arizona Sunday.

“We got desperate a couple of times to just keep” QB Russell Wilson safe, Carroll said. “I’m telling our guys on the sideline, ‘Russell will find his way out. You don’t need to grab a guy. He’ll make do with it.’

“We gave up one sack, an incredible job for a night’s work for 37 passes. Russ got banged a little bit, but that’s how it goes. That’s going to happen. (The penalties were) for the right reasons, just not at the right time.”

But desperation held a deeper meaning when Carroll confirmed that Sowell will be out “a few weeks” with a sprained MCL in his left knee. While not requiring surgery, the injury weakens an already weak unit that was the biggest problem in Seattle’s four-quarter output of five first downs and 130 yards of offense.

The reason the linemen were desperate was because Wilson’s greatly reduced mobility came from ankle and knee injuries during  sacks earlier in the season, the first significant hurts of his career. The absence of Wilson’s designed runs and spontaneous scrambles has hurt the Seahawks’ offense as much or more than the injury absence of RB Thomas Rawls, the heir apparent to Marshawn Lynch.

Then there’s the ripple effect on the defense, which with the overtime had to defend 95 plays by Arizona.

The fact that they held the Cardinals without a touchdown was perhaps the greatest single-game defensive feat in Carroll’s tenure. But it came at a cost, depleting players so much that they required IV bags to re-hydrate during and after the game. The Seahawks’ return flight was delayed until all players were treated.

“That was particularly obvious that our guys just gave everything that they possibly had until they couldn’t go any further,” Carroll said. “It’s kind of something the coaches talk about: ‘Give us everything you’ve got and we’ll drag you off the field at the end of the end of it.’ Well, that’s kind of what happened. We had to just about drag those guys off.”

The O-linemen are under big pressure to keep Wilson clean. While the single sack was a worthy feat, Wilson ran the ball just once for minus-two yards, and several of his throws were either nowhere close or deliberately out of bounds, a function of feeling the pressure that he couldn’t resolve with his wounded legs.

Wilson insisted after the game that everything was under control, even though he’s carried the ball 22 times this season for 33 yards. According to ESPN Stats & Information, Wilson has three games this season without a passing or rushing touchdown.

“I feel fine,” Wilson said after the game. “You guys keep asking me. I feel great. There’s times where some games, I run, scramble and make a play. Sometimes I don’t, and that’s whether I’m healthy or not. I feel great.”

Whether he feels fine, his play isn’t fine. It’s commendable that he hasn’t missed a game, but the rest of the offense can’t pick up the slack, even with Sowell healthy. When Sowell  went out in the fourth quarter, his immediate replacement was George Fant, whose chief biographical feature is that he played part of one season in college ball, none as a left tackle, until he joined the Seahawks as an undrafted free agent in spring.

An excellent natural athlete who was a four-year basketball star at Western Kentucky, the 6-foot-5, 307-pound Fant, 24, was hired as a project, and looked like it Sunday, although Carroll soft-pedaled it.

“We’ve been counting on young George to jump up at one of these times,” he said. “We didn’t know when it was going to be. He did an admirable job for his first time ever, and we’ll see how he goes. We’ve got some choices.”

One choice is J’Marcus Webb, the veteran who started the first three games at right guard but has played little since. The Seahawks could move Gilliam from the right side to left, and put Webb at right tackle. But the Seahawks coaches have expressed little confidence in Webb.

With the NFL trade deadline coming up Nov. 1, there is speculation that the Seahawks might have interest in two decorated veterans.  Joe Staley, 32, who has made five Pro  Bowls and started 137 games at left tackle, is reported to be available from San Francisco, which is 1-6 and could use a high draft choice next season. The same is true for hapless Cleveland and its star left tackle, Joe Thomas, 31, although coach Hue Jackson attempted to quell the rumor with a tweet Monday:

Trades are difficult in the NFL with the salary cap, particularly with offensive lineman having to integrate into a team at midseason.

Carroll indicated the Seahawks are always on scan for talent, but didn’t hint if they were going to go outside for a solution at left tackle.

They may draw a small break this week against the weakened, 2-4 Saints. But the game is on the road in New Orleans, and the Seahawks could have used a home game, given the need for more recovery time after the soul-sucker in the desert.

But if they are breaking in a new tackle in Fant, they at least have the advantage that the Saints won’t have much video on Western Kentucky basketball.

Carroll was “very optimistic” about the return of SS Kam Chancellor after a two-game absence with a groin injury . . . RB Thomas Rawls will begin running this week, and if all goes well, will return for the Monday night game at home against Buffalo Nov. 7 . . . Asked if the tie felt like a loss or a win, Carroll said, “It felt like a win when (Arizona PK Chandler Catanzano) hit the field goal off the goal post. Then I noticed when we missed our field goal, they looked like it was a win too. Then all of a sudden you say, ‘Wait a minute, we didn’t win. We just tied.'”