The Sounders have a chance to exploit their rally to a home-field advantage for a first-round knockout game by spoiling the playoffs for the team that twice beat them, including the game that ousted Sigi Schmid. 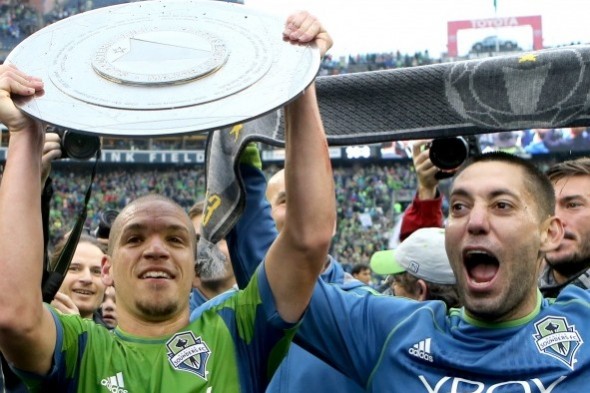 After a tumultuous 6-12-2 regular-season start, the MLS postseason is a clean slate for the Sounders. Rallying to finish fourth in the Western Conference to a earn first-round home game against Sporting Kansas City Thursday (7 p.m., FS1), the Sounders take the first step in forging a compelling ending to the greatest turnaround in club history.

The playoffs remain a major difference between MLS and Europe’s top leagues, such as the German Bundesliga and English Premier League. There, champions are those who finish at the top of the table after the final match of the season — the same criteria used to determine who wins the MLS Supporters’ Shield.

Only leagues organized into geographical conferences, such as MLS, or ones that play multiple tournaments in a season, such as Mexico’s Liga MX, use a playoff to crown a champion.

The difference creates no end of debate between fans as to which honor deserves more recognition, shield or cup. Unsurprisingly, divides often cut along lines depending on which clubs have claimed what trophy, especially if a rival has claimed the other.

Shield proponents say that it deserves a greater pride, since it requires consistent performance across a season. Cup advocates respond that the imbalanced schedules among teams in each conference mean that the shield may not be won by the league’s best team.

Then there’s the drama of playoffs.

Smoke and thunder and last-minute winners in knockout rounds. Penalty kicks bouncing off both posts and teams shaking off foes that have long tormented them in brisk autumn air.

As a tie Sunday for the other team that calls CenturyLink Field home has led many to observe, American sports fans crave resolution. Decisive action that leaves no question. So great is the love for a final showdown that public opinion (and the potential to make boatloads of money) moved the NCAA, a monument to rusty bureaucratic inertia, to permit creation in 2014 of a four-team college football playoff, where for decades opinion polls guessed at a national champion.

The playoff system is not unique to American sports or soccer, but it does help identify the the MLS incarnation of the game as distinctly American.

The lust for playoffs has not gone unnoticed elsewhere in soccer. The North American Soccer League, the second division of U.S. soccer, which has 12 teams and could easily live with the traditional manner of crowning a champion, shrewdly separates its season into spring and fall tournaments to allow for playoffs at the end.

For Seattle forward Herculez Gomez, there is no question which trophy is the greater honor.

“Being a Supporter’s Shield winner is a great accomplishment, but in no way is it more important than MLS Cup,” Gomez said at practice Tuesday. “This is what you play for. There’s a lot of guys who play a lot of years and don’t get a chance to lift the trophy. We’ve got a lot of winners (at the club), but we haven’t won together. In order for us to be taken seriously, we have to win together. The MLS Cup is what we’ll ultimately be judged on.”

Gomez, who won the MLS Cup with the Los Angeles Galaxy in 2005, hit upon another thing that the MLS Cup provides.

America loves its underdogs. In TV, movies and music, people find comeback stories compelling. The Sounders have such a story: On the brink of collapse, they dismiss a respected long-time coach in the middle of the season, then lose their star player to a heart problem, yet rally to face the team against which they looked so dismal during the lowest ebb.

The MLS playoffs have a history of redemption: The Supporters’ Shield winner has claimed the MLS Cup only six times in the league’s 20-year existence, and only twice since 2003, when the league had 10 teams and a 28-game regular season.

The MLS Cup is won as a result of playoff soccer, frenzied, loser-out games that sometimes cause better teams to forget themselves.

Interim head coach Brian Schmetzer said the goal for Seattle was to keep their heads in the madness, especially after a playoff-like game against Real Salt Lake Sunday.

“What I was concerned mostly about (from the RSL game) is making sure we continue to find the rhythm of our game and develop a few more chances,” Schmetzer said. “We know KC is stingy on defense. We have to create 10, 15, 20 chances. In the second half of the last couple games, we haven’t found our rhythm.

“Any team out of this (12-team playoff) field can push deep into the playoffs. We already believe we can do it. I think the guys are confident.”

There will be an adjustment for the youngsters. Forward Jordan Morris, a likely candidate for Rookie of the Year, will have to be aware that his improved finishing ability, developed over the course of 34 games, doesn’t get lost in the adrenaline of Thursday’s win-or-go-home stakes.

The Sounders lost both contests to Sporting Kansas City during the regular season. It dropped a 1-0 decision in the home opener, beginning the first 0-3 start in club history. On July 24 in sweltering Kansas City, the 3-0 shellacking was Schmid’s final game, and looked to be the beginning of the end for the club.

Seattle reverse its fortunes after that game, and now has the chance to seize what it so craves: