CB Richard Sherman was in for 99 snaps Sunday, needed two IV bags of fluids and was almost stretchered on to the team plane. But by Wednesday, he was on his feet, cracking wise in his Halloween get-up. 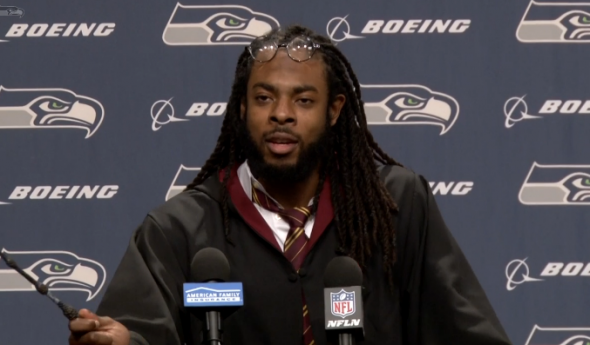 On a day when RB C.J. Spiller was fired and FB Will Tukuafu was re-hired off the street, and when the Seahawks declared themselves serious about starting a rookie college basketball player at left tackle (despite incumbent Bradley Sowell demonstrating to reporters his right knee was uninjured), the oddest part of Wednesday was CB Richard Sherman addressing the media in his Harry Potter Halloween costume: Round glasses, loose tie, wand and a House of Gryffindor wizard robe.

I’ve always suspected the Seahawks VMAC headquarters was Hogwarts by the Lake.

The real magic was that Sherman was spritely enough to be playful, after seeming to be the Seahawks player most impacted by the demands Sunday in the 6-6 tie at Arizona that grows a little more legendary with each re-telling.

“They didn’t let me lose consciousness,” Sherman said of the medical staff, which he said considered a stretcher for him. “But I definitely wasn’t focused and that’s why they wouldn’t let me go (to the plane) for a long time until I got my focus back.

“They looked me in the eye and just kept saying I wasn’t right, and I was looking clammy. But after a while you get some energy, you get some food in you and you get your step back.”

Sherman said he spent most of flight home shivering, a result of heat exhaustion that was treated with two bags of intravenous fluids before he left the stadium. On a warm evening in the desert, and thanks to the overtime and an offense of near-record wretchedness, Sherman endured 99 plays, most of them on top-speed chases. But he was only tied for third in most plays.

Including 13 snaps on special teams, SS Kelcie McCray, subbing for injured Kam Chancellor, had 108 snaps, the most in the league this year and maybe an NFL record, although snaps counts are a newly tracked number. LBs Bobby Wagner and K.J. Wright each had 102, and FS Earl Thomas joined Sherman at 99.

Sherman was at his limit in OT when Arizona WR J.J. Nelson caught a pass in front of him and escaped on a 40-yard run before being caught from behind by McCray in a remarkable effort that prevented the game-winning touchdown.

“I knew the play, I jumped the route, but my body said, ‘Yep, that’s it,’” Sherman said. “Unfortunate. Sometimes you tell your body to do something, and it doesn’t agree with what you say. That was one of those times.

“Thankfully, Kelcie was able to save the day, and I appreciate him.”

Wilson has a third injury

Already slowed by injuries to each leg, QB Russell Wilson showed up for the first time in his five-year career on the daily injury report, but not for those earlier pains. He was listed Wednesday as limited because of a pectoral injury on his throwing side.

Carroll didn’t mention the development, and won’t meet the media until Friday to explain.

Carroll did mention that Wilson, by about the sixth game of past seasons, usually has accumulated about 300 yards rushing. This season he has only 33 in 22 carries, including minus-two in Sunday’s draw with Arizona.

“That’s a big difference for us,” he said. “We’re playing to that and we’re going to do the best we can until that adjusts.”

The pec injury is yet another mark against the work of the line, in which the Seahawks have invested the fewest salary dollars of any line in the NFL. Speaking of which . . .

Undrafted rookie George Fant, the 11th-leading basketball scorer in Western Kentucky University history, played only a handful of snaps as a tight end for his college football team. Now he’s on the edge of starting in the NFL at left tackle — a position he has never played until the Seahawks preseason.

After Bradley Sowell went down with a sprained knee in the fourth quarter Sunday, Fant  stepped in for the game’s final 24 snaps.

“He did fine on Sunday, so it wasn’t too big for him,” line coach Tom Cable said. “What he hadn’t had the opportunity to do was fix the issue as it happened. He got bulled one time, and spun on one time. Then the next time it happened he recovered on both of them.”

Nevertheless, an O-lineman can’t be much more raw than Fant. But he and fellow rookie Rees Odhiampo are in competition to start, with veteran J’Marcus Webb also a possibility, at 10 a.m. Sunday in New Orleans against the Saints.

“This is as rare an instance as you get,” said Carroll. “Here comes George Fant. He’s never played football before. So the concerns would be everything you can think of. However, he has quelled those concerns by the work that he has put forth, by the competitive nature that he brings, by the athleticism which is really good.

“Probably the biggest (concern) is just communication and doing the right thing. Generally, it just takes time, so you have to work your way through that.”

Asked if he was the best basketball player in the locker room, Fant glanced at the locker of former University of Miami basketball star Jimmy Graham, now the Seahawks tight end, then smiled.

Besides Sherman’s apparently miraculous recovery, Sowell demonstrated he was back from a sprained MCL in his right knee by showing reporters in the locker room Wednesday that he could get in his stance and move without impediment. Sunday, he was carted off the field with a towel over his head, apparently weeping.

“Sowell looks like he’s not hurt — I don’t know what to tell you, ” he said. “I don’t know how this happened. He looks great. Whatever recovery he’s making, he’s a thousand miles ahead of what could have been. I don’t know what that means when he starts to take a work load, but he’s barking at us right now. He thinks he can play.

“I don’t know how he’s able to do that, but something is in the water.”

Tukuafu back after Spiller cut

FB Will Tukuafu was back in the locker room Wednesday after spending the past five weeks at home in Utah tending to his wife, as well three children all under age four: “I wasn’t watching much football,” he said.

The Seahawks apparently decided that, with the return to health of rookie RB C.J. Prosise, they no longer needed veteran RB C.J. Spiller, who scored a touchdown against the New York Jets, to be the third-down back. Spiller, who had nine yards on three carries and 43 yards on five receptions, was cut.

Tukuafu was called Tuesday and showed up Wednesday to be the fullback Seattle has lacked since he was cut and TE Luke Willson was injured.

On a Sirius XM radio interview Monday, Arians said, “The competition committee went through that play and the officials wanted it taken out. The committee left it in, but it cannot be officiated. Whether he touches, whether it was leverage, was his foot within the framework of the defensive lineman’s feet before he jumped, all those things that go into that call, I think it’s bad for football.

“Because what you’re going to have to do now, is start having centers raise their face up and get kicked in the face, and things that are just dangerous to the players. I think it’s a dangerous play as it is and should be taken out of the game.”

Carroll disagreed that it was bad.

“It takes an extraordinary athlete with great timing and the guts to pull it off. Bobby did all that.”

Added Sherman about Arians: “Your rhetoric is denied.”