Despite Chris Hansen’s offer to privately fund his proposed SoDo arena, Seattle Mayor Ed Murray is still going to pursue the option of renovating KeyArena at the Seattle Center. 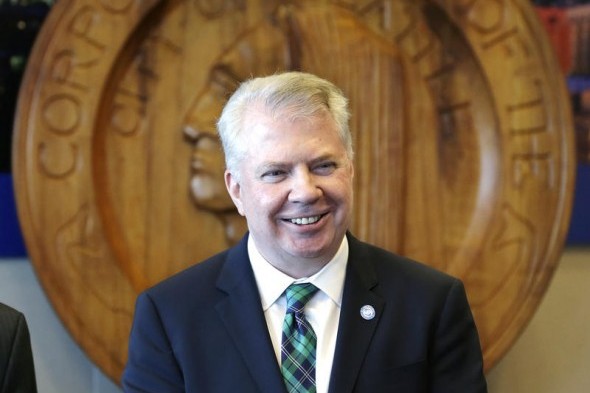 Even though entrepreneur Chris Hansen Tuesday seemingly removed a major obstacle to his proposed SoDo basketball/hockey arena by offering to privately fund the facility, plus help pay for the Lander Street overpass, Seattle Mayor Ed Murray’s office told KING5 Wednesday that Murray is entertaining other ideas for an arena, specifically involving KeyArena.

The mayor’s budget director, Ben Noble, told KING5 that Murray is again exploring a major renovation of the Key. The facility, in the Seattle Center, served as home to the NBA’s SuperSonics until 2008, when they moved to Oklahoma City, setting off the eight-year scramble to replace them.

“We’ve been approached by more than one legitimate group,” said Noble. who added that a 2015 AECOM report on a potential remodel the Key to accommodate the NHL initially generated little interest.

“Nothing much came of it, at first,” said Noble.

But after the Seattle City Council voted May 2 to reject the street vacation that Hansen’s group needs to proceed with an arena in SoDo, talk about the KeyArena option picked up.

Noble explained that the groups exploring renovating Key Arena have bought into the AECOM study’s conclusion that pivoting the floor 45 degrees would allow for NBA and NHL teams to play there. He added that the arena’s roof is not designated with landmark status so that it could be torn down for the right project.

“There are perhaps legs to the discussions,” Noble said, adding that the interested groups, whom he declined to identify, believe they can contribute significant private money to redevelop the Key without a commitment for an NBA or NHL team. Noble said it’s unclear whether these groups would seek public money.

Noble said talks have advanced far enough that the city is planning to issue a “request for proposal” in December. Noble said he believes the RFP plans helps explain why Hansen’s group made its privately financed SODO arena pitch Tuesday.

Regardless of Hansen’s offer, Noble said the city plans to issue the RFP, while acknowledging that any RFP would have to address the significant transportation and parking challenges in and around Seattle Center. A column by Art Thiel of Sportspress Northwest addressed some of those issues in March.

“We still remain in contact with the Hansen folks,” said Noble.

The city is contractually obligated to Hansen, via the MOU, until November 2017.