QB Troy Williams, a former four-star UW football recruit, departed the program a year after Chris Petersen took over and will lead Utah against the Huskies Saturday in Salt Lake City. 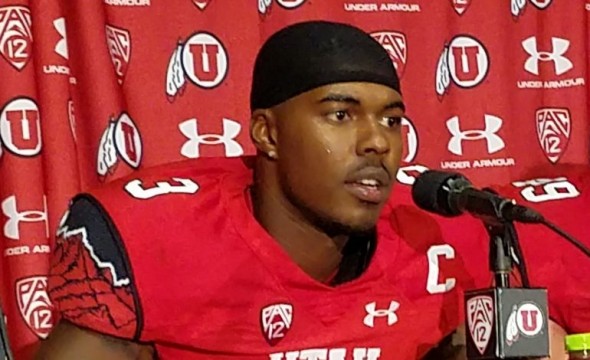 Huskies coach Chris Petersen didn’t elaborate on any of the developments except to say of Williams, “It just didn’t work out for him here.”

As Browning would do two years later, Williams enrolled at Washington early, in January 2013, selecting the Huskies over Arizona and UCLA. Recruited by then-coach Steve Sarkisian, he had been the 2012 CIF Los Angeles City Section City 1 Player of the Year and a Parade magazine honorable mention All-America. Rivals.com listed Williams, a four-star recruit, as the “No. 1 dual-threat quarterback in the nation and the No. 11 player at any position in talent-rich California.”

To win the starting job at UW after his redshirt year (2013), Williams had to beat out two other young quarterbacks, Cyler Miles, a Centennial, CO., native who mopped up during Keith Price’s senior season, and Jeff Lindquist, a Mercer Island product who had never attempted a collegiate pass.

But even after Miles drew a lengthy suspension for foolishly crashing a Seahawks Super Bowl party in the U District, Williams couldn’t beat out Lindquist, who won the start for the 2014 season opener against Hawaii.

After Miles returned, Williams saw action in only five games  and made one start, a 24-10 loss to Arizona State at Husky Stadium Oct. 25. Given the monsoon-like conditions that evening, Williams did well to complete 18 of 26 for 139 yards with two interceptions.

Williams never had another shot to start, even though Miles was so ineffective that Petersen was forced into the awkward position of moving speedy WR John Ross to defense in part because Miles could not deliver the ball to him.

When the 2014 season ended, with Miles (who ultimately quit football) ahead of him on the depth chart, and facing competition from Petersen recruits Browning and K.J. Carta-Samuels, Williams saw the handwriting and opted out of the program.

“I felt like I competed to the best of my ability,” Williams told a Huskies blogger on the day his departure was announced. “We had a great group of guys and I felt like I did my part, trying to lead the team and doing my best out there. I was never afraid of the competition. That was one of the reasons I went to UW. I wanted to show that competition doesn’t scare me. It was fun while it lasted.”

Williams also admitted that the transition from Sarkisian to Petersen was “rough.”

“Sark was recruiting me since my 10th-grade year,” Williams said. “He gave me my first offer, and I had a great relationship with him and everybody on the staff. Sark knew what I had to go through and how hard I worked to get there. It was going to be good.”

But suddenly it wasn’t going to be good. Browning and Carta-Samuels were Petersen’s guys and Williams wasn’t. He knew he would transfer even before Washington played Oklahoma State in the Cactus Bowl, but kept that news to himself, preferring not to become a distraction. Once his decision became public, Williams had one main thing to say:

Most in the Scout.com and Rivals.com crowd thought Williams, after playing junior college ball for a year, would follow Sarkisian to USC. But he didn’t, without public explanation. After throwing for 2,750 yards and 31 TDs for Santa Monica College in 2015, he enrolled at the University of Utah, becoming the second star UW recruit to wind up with the Utes.

It was a long time ago, but in 1955 another young California quarterback with big potential enrolled at the University of Washington. After a season of freshman ball, Lee Grosscup suddenly bolted the Huskies program, citing irreconcilable differences with Coach John Cherberg, whom Grosscup famously described as “tyrannical.”

Grosscup transferred to Santa Monica College, as Williams would do 60 years later. After a year (1956) there, Grosscup enrolled at Utah, where he made first-team All-America (AP, UPI, Look, Newspaper Enterprise Association) before becoming the No. 10 overall pick by the New York Giants in the 1959 NFL draft.

Williams isn’t quite on Grosscup’s track, but the Utes are 7-1, leaders of the Pac-12’s South Division, and Williams is more than holding up his end. He hasn’t put up Browning numbers (1,709 yards, 26 TDs, 2 picks), but his 1,725 yards, seven TDs, five INTs and 124.89 efficiency rating (in one more game than Browning), places him in the middle of Pac-12 quarterbacks.

One major difference between Browning and Williams: Browning, currently No. 2 on ESPN’s list of Heisman Trophy favorites, is completing 68.6 percent of this throws to Williams’ 55.90. But Williams has 145 rushing yards and five TDs to Browning 69 and four.

Petersen made the right call for his program in going with Browning. But Williams also made the right one for his career in leaving Washington. Now he gets chance to stick it to the Huskies Saturday in Salt Lake City (12:30 p.m. PT, Fox Sports 1).

‘This is the big one I’ve been waiting for,” Williams said on a conference call this week. “I can still remember the day (two years ago) I was telling everybody, just give me a year or two and I’ll be right back. And we just laughed about it. Now it’s actually here.

“(Leaving Seattle) was tough. But everybody that I talked to about leaving agreed with me, that it would be the best decision or me. They were telling me, yeah bro, you’ve got to get out of here and try to get somewhere else. Everybody sees it. You’re not his (Petersen’s) guy. You guys aren’t clicking.”

Petersen this week had his own explanation for why he allowed a future Pac-12 starting quarterback to leave town.

”Those were chaotic times on everybody,” Petersen said. ”We were trying to figure out our identity on offense, and we had Cyler (Miles) and Jeff (Lindquist) and all those type of things. I think sometimes, as you’re working through all those things, and you didn’t recruit a guy; the guy just says, ‘Maybe I just need a fresh start.’ I thought Troy was a good player when he was here, and I knew he’d go somewhere and be a really good player. I think that’s proven true.”

“I’m sure I’ll have a little something to say out there, but nothing too much,” Williams said of facing the Huskies. “I’m trying to stay focused and keep my mind on the game.”

No. 4 Washington is a 10-point pick over the No. 17Utes, but Utah has an impressive record against ranked opponents over the past decade and a half. Since 2000, Utah has posted 14 wins over members of the Associated Press Top 25, including a 31-17 victory over No. 4 Alabama in the Jan. 2, 2009 Sugar Bowl.