No braces or tape can help Wilson through a pectoral muscle injury. For a game against the weak defense of the Saints, it’s time to rest him and turn things over to backup Trevone Boykin and the defense. 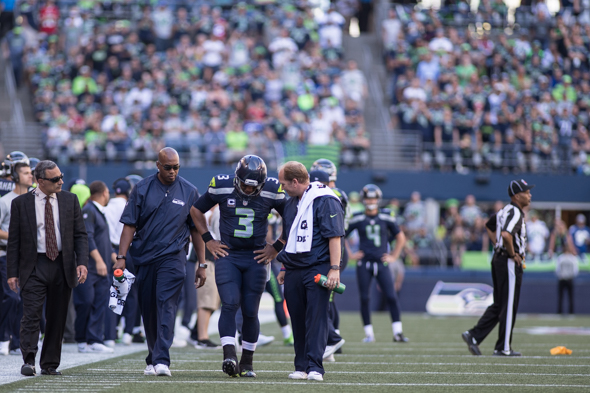 For Russell Wilson, the season has been the first health ordeal of his pro career. / Drew McKenzie, Sportspress Northwest

So the Seahawks question of the week is: Do the coaches think a Trevone Boykin-led offense is good enough to get 17 points Sunday in New Orleans against the Saints defense, which is giving up 32.5 points a game, the NFL’s worst?

If the answer is yes, then rest Russell Wilson for a game, fergawdsakes.

If no, then what the hell? Fergawdsakes.

Now that Wilson has lost his superpower of near-indestructibility, a smart Seahawks idea for November and December would be to keep Clark Kent going until the offensive line can bury the kryptonite sufficiently deep that Superman can return.

If there were a game on the schedule to merit giving Wilson a rest, it is a game in which the opponents’ defense is least disruptive.

Naturally, Wilson scoffed Thursday when asked about his latest injury, a right pectoral muscle strained in Sunday’s game, and whether there was any way he would not start.

“That’s not the plan,” he said Thursday before practice. “I look forward to overcoming the storm.”

Wilson is the real-life embodiment of the Black Knight in Monty Python’s Quest for the Holy Grail after King Arthur hacks off his arm in a sword fight, yet keeps swinging.

“T’is but a scratch,” said Sir Knight. Or in Wilson’s words about his pec injury: “Not crazy, crazy bad or anything like that.”

Anyone who has strained a pec muscle knows it is a notoriously slow-healing injury, compounded by the fact that Wilson needs to throw 30 to 35 times for Seattle to succeed, plus countless warm-up throws. Please join me in a group cringe imagining a Saints edge rusher hooking Wilson’s right arm as he throws the ball.

Not a doctor-recommended therapy.

Even with a good offensive line, the chance of re-injuring a sore chest muscle is high. There is no tape or brace to help. And the Seahawks offensive line conjures no vision of the Himalayas.

As Arizona CB Tyrann Matthieu said after Sunday’s game,  “Let’s call it what it is – their offensive line is not that good.”

And that was with regular starter Bradley Sowell at left tackle. He claimed Wednesday to have recovered from a sprain Sunday the left MCL in his knee, but the Seahawks are working two rookies, George Fant and Rees Odhiampo, at the position this week. If it’s Fant, he’ll be starting his first game at any level of football at left tackle, the second-most important offensive position behind quarterback.

At least Boykin, Wilson’s back-up and another rookie, spent his college career at quarterback. If Fant starts, it’s almost like asking a truck driver, after an afternoon of training, to jump into the cockpit of a 747.

The local and national criticism of the O-line went beyond Matthieu, deservedly so. The offense never crossed the 50 on its own during regulation time, piling up five first downs and 130 yards. But line coach Tom Cable wasn’t moved to weep over the public catcalls.

“I don’t mean to offend anybody, but that stuff doesn’t matter to us,’’ he said Wednesday. “Because if you get into that world, then you become kind of like fan thought. If they understood what is going on, they would think they are pretty good.

So right now, (linemen) look at the film, they look at their grade, (and say) ‘That’s who I am. That’s the truth.’ Whatever is written or said doesn’t mean anything.’’

If coach Pete Carroll were to decide Sunday morning to go with Boykin and the suggested 17-point aspiration, it also means asking the Seahawks defense to hold the Saints’ No. 3-ranked offense (29.3 ppg) to 16 points or less — after Seattle went a spirit-draining 95 plays in Sunday’s draw with Arizona.

But if there was any group of guys that would respond well to orders that demanded re-digging the Panama Canal using spoons, it is the Seahawks defense. Silverware up, gents.

Wilson has shown an impressive ability to power through knee and ankle injuries when many believed he couldn’t or shouldn’t. But it’s fair to wonder whether his hyper-competitiveness can override the judgment of the coaching staff. I asked Carroll Monday whether Wilson is more honest with coaches than he is during his media pronouncements that he feels good.

So the question Sunday morning will be between Wilson’s wants and the Seahawks’ needs. For the first time in five years, there may be a difference.