Nelson Valdez, the designated player benched and derided, came in as a sub and delivered the match winner. He and his teammates couldn’t have been more thrilled. 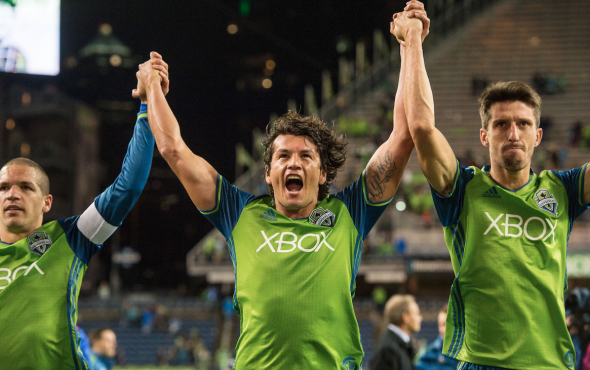 Nelson Valdez’s work had been so long missing from the back of the net that police would have called it a cold case and shut the file. But it the 88th minute Thursday night of a do-or-die playoff game at the soggy Clink, he regained in an instant what he once had done best, and saved the Sounders’ improbable season with the preposterous.

Valdez, 32, hadn’t scored an MLS regular-season goal since his debut game Aug. 15, 2015.
The heralded designated player from Paraguay picked up one in the playoffs, but nothing in 2016 except in U.S. Open Cup play.

He was supposed to be the third scoring weapon behind Obafemi Martins and Clint Dempsey, and paid like it — $1.5 million a year. Instead, his game disappeared almost as dramatically as Martins and Dempsey disappeared physically.

In August, he lamented his fate.

“For a striker to not score like this is very difficult,” he said. “All I can do is work hard and maybe I’ll be more lucky next time.”

As late as Sept. 9, the Sounders were in ninth place in the Western Conference, and Valdez for much of the season had been a reserve. As the team’s most disappointing performer, no one felt the burden more.

Nine minutes after subbing in, no one in Seattle felt more joy than Valdez. His flying header, following service from Joevin Jones, zipped in from five yards to decide the 1-0 bar fight with Sporting Kansas City, a perfect metaphor for the Sounders season — coming in late and low.

“I’ve been feeling a big mountain on top of me for the whole season,” Valdez said, beaming. “With the goal, the mountain went away.”

The 36,151 on hand felt the earth tremble a bit too. After a wretched seasonal start when leading scorer Martins abruptly departed for China’s pro league, to a slow integration of rookie stalwart Jordan Morris. to the firing of the franchise’s only coach, Sigi Schmid — and enduring 1-0 and 3-0 losses to SKC — the Sounders have gone seismic.

They beat Real Salt Lake Sunday 2-1 to clinch a playoff berth as the No. 4 seed, beat the fifth seed and one of the league’s best defensive clubs in a cantankerous affair in the knockout round, and advanced to their third game in eight days at 6:30 p.m. Sunday (FS1) at the Clink against the No. 1 seed, Dallas, in the Western semifinal series.

The fact that it was Valdez who delivered the dagger could not have delighted interim coach Brian Schmetzer more.

“I can’t think of a better person to be rewarded for this moment,” he said. “He has worked so hard all year long. I know that people have said things.We get that; we’re all pros.

“For him to come through in such a critical moment is well-deserved. I’m so happy for Nelson.”

The sentiment was not confined to the boss.

“If I could find someone to score this goal, it would be him,” said teammate Cristian Roldan, the former University of Washington star. “He so deserved it.”

Valdez did his best to avoid sulking and  self-pity.

“Everybody who knows me know how hard was this year,” he said.  “I tried every day to make the best (of it). I’m so happy for the goal.”

The regular season that began 6-12-2 pivoted at the time of Schmid’s firing, and the hiring of Nicolas Lodeiro, to an 8-2-4 finish. They pulled it off despite the abscences of arguably the three most important team figures heading into training camp — Martins, Dempsey and Schmid.

And then the most unlikely veteran among them, the heavily criticized Valdez, delivered the decisive blow.

Sometimes there are things in sports that cannot be explained. Often, they are the most enjoyable.