Sporting Kansa City coach Peter Vermes raged that Nelson Valdez was offisde when he struck the game-winner in the 88th minute. But it didn’t change the 1-0 decision that advances the Sounders. 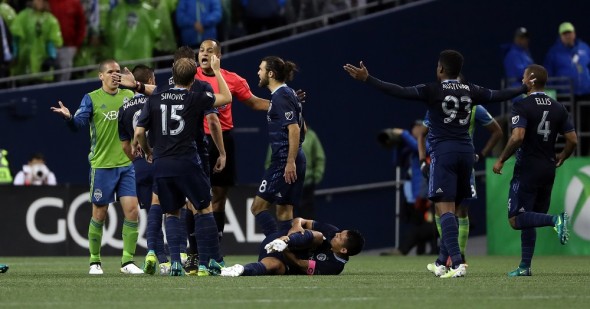 It was a controversial night at the Clink as the Sounders beat Sporting Kansas City Thursday. / Corky Trewin, Seattle Sounders FC

The Seattle Sounders avenged a pair of regular-season defeats by Sporting Kansas City Thursday night at CenturyLink Field, as substitute Nelson Valdez headed home a game-winning goal in the 88th minute for a 1-0 win to advance through the knockout round of the MLS playoffs.

Joevin Jones tracked down a ball near the left edge of the box, sending in a cross that Valdez met at a full dive to beat Kansas City keeper Tim Melia. But subsequent views of the replay made it appear that Valdez was in an offside position when Jones struck the ball. 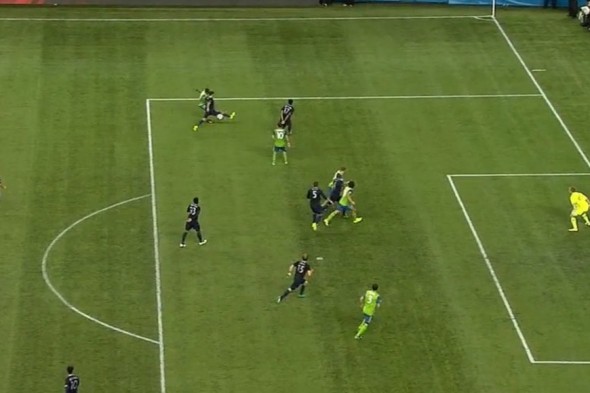 Nelson Valdez, center of frame, appeared to be offside on his game-winning goal. / Fox Sports 1

The incident was one of three controversies. One was a header goal by Kansas City’s Matt Besler in the 53rd minute that was disallowed after Besler was ruled offside. The other was rough tackle by Seattle midfielder Osvaldo Alonso,  already playing on a yellow card, that could have seen him sent off.

Replay of Besler’s goal made it barely apparent he was offside when the ball was sent in. 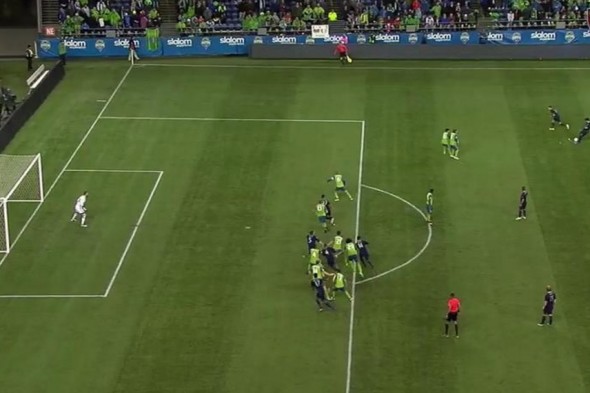 Matt Besler was barely offside when he headed the ball into the net. / Fox Sports 1

Seattle keeper Stefan Frei was relieved when he saw the flag go up after the ball hit the net.

“He seemed to be unmarked, for one, and a little bit ahead of everyone else,” Frei said. “That doesn’t mean he’s off. The one guy who has the best view is the linesman, and ultimately his opinion is the one that counts.

“Dodged one there, because (Besler)’s strong in the air regardless of whether he’s offside or not. We can’t let him go up that easily.”

The Alonso incident was for a rough tackle on Benny Feilhaber in the 67th minute. Alonso slid in for a long tackle, appearing to get a piece of the ball before hauling down Feilhaber in a tackle that could have easily drawn a second yellow from referee Ismail Elfath. Elfath, after consulting with fourth official Ricardo Salazar, signaled for a throw-in.

Feilhaber was so incensed that, after he returned to the match after consulting a trainer on the sidelines, he went after Elfath, shouting in his face and drawing a yellow card for dissent before being dragged away by his teammates.

“I hope that you don’t omit anything that I say here today, and I mean that,” Vermes said, animated but composed. “First, I congratulate Seattle for moving on. Unfortunately, the game was one in which we scored, our guy was onside. They scored, and their guy was offside. Alonso should have been thrown out.

“That’s three plays within the game that completely changed the match . . . I think that (the Professional Referee Organization) and Major League Soccer owe us an absolute apology, because this game was taken away from us today.”

Vermes will likely be cutting the league a check after he is fined for his comments in the next few days, but there was slightly more than just sour grapes.

The game was an intense affair, with possession split — Kansas City controlled the ball for 50.8 percent of play. The visitors held a slim 12-10 advantage on shots, but forced seven saves from Frei. Valdez’s goal was Seattle’s lone shot on target in the contest.

Interim head coach Brian Schmetzer said the game was an improvement on the choppy, brutal 2-1 win over Real Salt Lake to win the right to host Thursday’s match.

“I think the game against RSL was intense, but playoffs are a little bit different,” Schmetzer said. “It’s one level higher. Some good moments in the game soccer-wise, some good attack moments, some resilient defending. I think overall, the level of the game was indicative of a true playoff match.

“It’s a playoff game. RSL might not have been our prettiest game, either. Teams are making it difficult for us because it’s the playoffs. It’s just making sure we defend well and making sure we take our chances when we have it.”

Seattle was the beneficiary of the other great uncontrollable variable of playoff soccer: What referees do and don’t see.

Credit is due to Seattle for hard-nosed defending at the back end, spearheaded by Frei and center backs Roman Torres and Chad Marshall. Every time Feilhaber or forward Dom Dwyer seemed to find a lane, the Sounders stunt the attack.

When the final whistle blew, Feilhaber sprinted up to Elfath to give him one last piece of his mind, again having to be dragged away by several teammates.

Vermes and Schmetzer went to shake hands, leading to the following exchange, described by Vermes:

The honesty was commendable. But the verdict stands.