DE Michael Bennett is out of Sunday’s game in New Orleans, and may require surgery to fix cartilage damage. QB Russell Wilson, however, made it through practice and will start despite a sore pec. 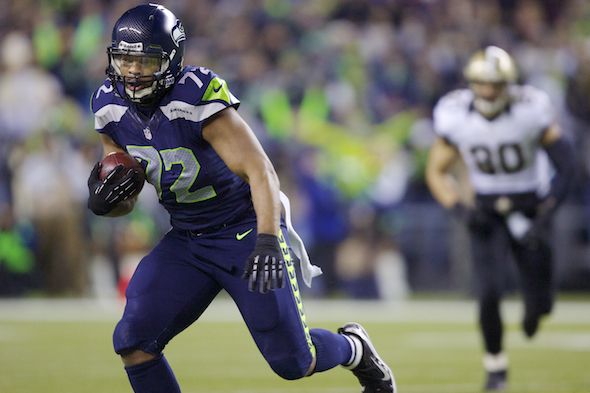 Michael Bennett won’t be running away from the Saints Sunday, as he did here two years ago. / Drew McKenzie, Sportspress Northwest

Apparent knee cartilage damage will keep DE Michael Bennett out of the Seahawks game Sunday in New Orleans and surgery is “a possibility” after a Monday exam, coach Pete Carroll said after practice Friday. Also missing from the defense for a third game in a row is SS Kam Chancellor, whose groin strain now is termed “substantial.”

QB Russell Wilson, however, despite a pectoral injury Sunday after previous injuries to an ankle and a knee is “ready to go,” said Carroll, who claimed Wilson was “hit” in the chest muscle.

“Russell threw every day this week,” he said. “We kept it limited to make sure we didn’t aggravate it. We didn’t want to throw through it and ignore it. We kept it under control. He didn’t throw anything full speed; He didn’t need to. There was a few balls during the week.”

Regarding Wilson’s leg injuries, “He was able to run,” Carroll said. “He continues to improve in his mobility. I wouldn’t be surprised if he takes off a little bit more than he has.”

Bennett hurt his knee two weeks ago during a cut block in the Atlanta game, but managed 81 snaps in Sunday’s 6-6 tie at Arizona.

“His knee bothered him coming out of the game,” Carroll said. “He had a little swelling Monday and Tuesday. It might be related (to the Atlanta injury). It popped up during the (Arizona) game. Nothing showed after the game in Atlanta.

When Bennett met reporters Thursday. he gave no indication that he would be out. Club policy is to permit no media contact with injured players.

“That was very difficult,” Bennett said of playing Sunday with the sore knee. “I think Brett Favre said it best: When you can play really great when you’re injured, that’s when you become a great player.

“Of course, it was painful. But you have to be able to put your mind to the side and kind of just keep going in, focus on your teammates and focus on the task at hand and try to win the game.”

Bennett has played through numerous injuries and has not missed a game since his 2013 arrival in Seattle. At least some of his snaps will go to DE Frank Clark, who has played well this season as a backup, as well as rush end Cassius Marsh.

The Seahawks signed to the 53-man roster Malliciah Goodman, 26, a 6-5, 276-pound fourth-year vet out of Clemson, from where he was drafted in the fourth round by Atlanta. He started 28 of 34 games for the Falcons over three seasons before being waived on the final cutdown Sept. 3.

Of Goodman, who will play both tackle spots, Carroll said, “We were for fortunate we had him coming this week. He has really good technique, real long arms and a physical way about him.”

Regarding Chancellor, Carroll said, “I was real hopeful this week to turn it around, but we didn’t quite get it done. He had a groin pull, and after the first week, we pushed it a little bit. It just didn’t turn the corner. Just have to wait it out.”

Since OLB Kevin Pierre-Louis will also miss the game (ankle) that means three defensive starters are out. The news was a little better for the offense: WR Tyler Lockett was cleared to play despite being kneed in in the thigh during practice. His knee problem “is all but gone,” Carroll said.

And LT Bradley Sowell will be a game-time decision after a knee sprain at Arizona forced him from the game. If he can’t go, rookie undrafted free agent George Fant, who finished the final 24 saps Sunday, is “likely” to replace Sowell, Carroll said.

A special teams casualty is DeAndre Elliott, who has had a hamstring inflammation problem that will keep him out awhile. Rookie Tyvis Powell will fill in.

Overall on defense, Carroll said the unit bounced back well from the grueling 95 plays in the Arizona game, after which numerous players were rehydrated with IV bags.

“We took care of them,” Carroll said.  “Everybvody’s responding like they feel great. They looked very quick today.”