After taking a 14-0 lead, Washington allowed Utah to score the next 17 points before rallying for a 31-24 victory Saturday in Salt Lake City to keep the Huskies undefeated. 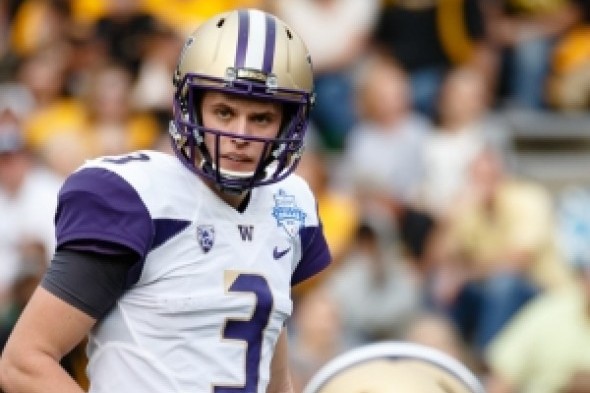 WR Dante Pettis broke a 24-24 tie with 3:25 to play by returning a punt 58 yards for a touchdown and No. 4 Washington narrowly escaped Rice-Eccles Stadium in Salt Lake City Saturday with a 31-24 victory over No. 17 Utah (box). Ahead 14-0 early, then down 17-14 midway through the third quarter, the Huskies rallied with 10 points in the fourth quarter to improve to 8-0 for the first time since 1992.

Pettis retreated moe than five yards after taking the punt from Mitch Wishnowsky and picked up three key blocks — all of which could have resulted in penalties — and raced down the right sideline for the winning touchdown. It was the second punt return TD of the season for Pettis and the fifth of his career, breaking a tie with Beno Bryant (1989-93) for most in UW annals.

Washington, which extended to 11 a winning streak that dates to last season, scored on drives of 84 and 95 yards for a 14-0 lead, but weathered 17 consecutive Utah points following a Jake Browning interception.  They rallied to win against a Utah team that received a pair of touchdown passes from former UW quarterback Troy Williams and a 172-yard performance by RB Joe Williams.

The Huskies are unlikely to move up in the polls this week. No. 1 Alabama didn’t play (idle). No. 2 Michigan defeated Michigan State 32-23 Saturday afternoon and No. 3 Clemson defeated No. 12 Florida State 37-34 Saturday night.

After Troy Williams threw a 24-yard TD to TE Evan Moeai to tie at 24, the Huskies drove to the Utah 41-yard line. On fourth and eight, Browning pooch punted to the Utah one-yard line. The defense forced the Utes to punt from their two. Pettis, who had a 68-yard return for a score in the season opener against Rutgers, took it 58 yards to keep the Huskies undefeated.

Browning also tossed his third interception, a poor throw in the second quarter that Utah’s Chase Hansen returned 31 yards to the UW 19. That set up a Joe Williams TD run and began a run of 17 consecutive points.

The Huskies had a difficult time stopping Joe Williams, who had 110 yards in the first half en route to 172, second-most against Washington this season (QB Brandon Dawkins of Arizona had 176 Sept. 24). Williams ran for 332 yards last week at UCLA.

UW fairly stifled Troy Williams, who transferred from Washington in 2015 when it became clear he wouldn’t get a shot to play QB for head coach Chris Petersen. Williams completed 14 of 31 for 163 yards. His two TD passes, plus occasional scrambles, kept Utah in the game.

LB Azeem Victor led the Huskies with 16 tackles (10 solo), including one for loss, but also had two costly penalties that sustained Utah drives. LB Connor O’Brien had eight tackles, including one for loss. LB Keishawn Bierria recorded Washington’s only sack, on Utah’s next to last play that forced a 4th-and-15 Hail Mary that was uncatchable.

“It was awesome for Dante to get that return at the end because (Mitch Wishowsky) is a heck of a punter. He’s a weapon. We could get nothing. He just kept driving us back, driving us back. We finally got our chance and Dante made a couple guys miss and hats off to him. This is real football, Pac-12 football . . .  This is how it goes, sometimes you have to grind out games in the fourth quarter.” — Petersen

“That punt wasn’t bad. We missed a tackle or two. We had really controlled the field position with(Wishnowsky) and the punting game up until that last punt.” — Utah coach Kyle Whittingham.

The Huskies travel to Berkeley Saturday to face the Cal Bears (2-3, 4-4), who lost Thuraday to USC, 45-24. Kickoff time and TV information haven’t been released. Washington’s next home game is Nov. 12 against USC.