Sounders have history of errors with Dallas

The Sounders face FC Dallas at home Sunday, aware that they have made defensive blunders in the previous post-season against the Supporters’ Shield champs. 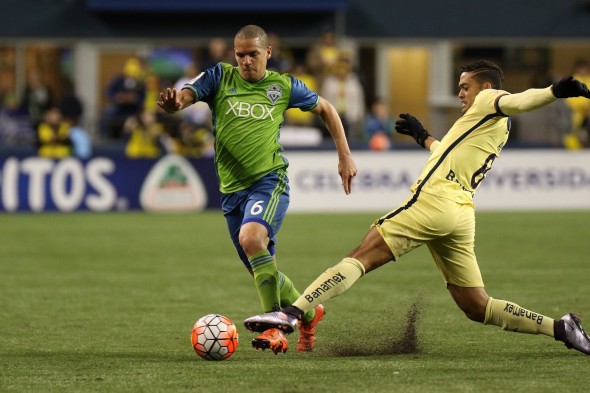 The Seattle Sounders host Supporters’ Shield winners FC Dallas in the first leg of the Western Conference semifinals Sunday (6:30 p.m., FS1). Seattle faced Dallas Oct. 16, losing after conceding two goals in the final fifteen minutes of play. It was not the first time they broke down against Dallas.

The other great blunder by was in last year’s Western Conference semifinals. After finishing the home leg with a 2-1 win, the Sounders went on the road and had difficulty keeping up with Dallas’s speed. Trailing 1-0 in the 90th minute, a result that would have eliminated Seattle due to the away-goals tiebreaker for aggregate scoring, Chad Marshall headed in a goal that all but guaranteed the Sounders a trip to the Western finals on an aggregate score of 3-2.

Seattle’s defense collapsed, however, conceding a goal to Walker Zimmerman one minute later, before the club went on to lose on penalties.

Now, Seattle faces the best team in the league with an offense that has lacked the precision that it used to go 8-2-4 down the home stretch of the regular season.

Interim head coach Brian Schmetzer said Friday that the team was looking to fix the problem.

“We’re talking about that,” Schmetzer said. “Our touches are down between (Jordan Morris and Nicolas Lodeiro). We’re trying to figure that out. It’s noticeable. Yes we do (see it), and yes we’re working on it. Some of it is personnel, losing (Clint) Dempsey, (Andreas) Ivanschitz, Brad (Evans) is coming on as a substitute, not a starter. The personnel that we do have must step up.”

One man the Sounders are happy about is defensive midfielder Osvaldo Alonso, who played in the knockout game against Sporting Kansas City Thursday with characteristic vigor, at times looking like he was on the cusp of being ejected.

Alonso remained, however, and was crucial to attempt to slow down Dom Dwyer and Benny Feilhaber. He will be equally important over the next two matches.

He may also prove a game-changer on offense.

Last year, Alonso missed the playoffs due to lingering injuries from the regular season, including both matches against Dallas. The year before, however, Alonso scored a crucial road goal in a 1-1 draw against Dallas in the conference semifinals. A 0-0 result at CenturyLink Field the following week saw Seattle advance by virtue of road goals.

Schmetzer said facing Dallas so soon after Seattle’s regular season loss to the club would be good for his team’s psyche.

“I would say it’s an advantage because it was a competitive game,” Schmetzer said. “If we had gone down there and gotten blown out it would be a chink in our armor psychologically. The team knows we can play well against Dallas.”

After Sunday’s contest, Seattle will have a week of training before traveling to Frisco, TX, for the second leg Nov. 6. The club has to guard against more gaffes defensively if it is to press on to the MLS Cup.