On a day when Utah’s defense made it a priority to harass QB Jake Browning, RB Myles Gaskin picked up the slack. And Browning should win a few Heisman Trophy votes for his precision punting. 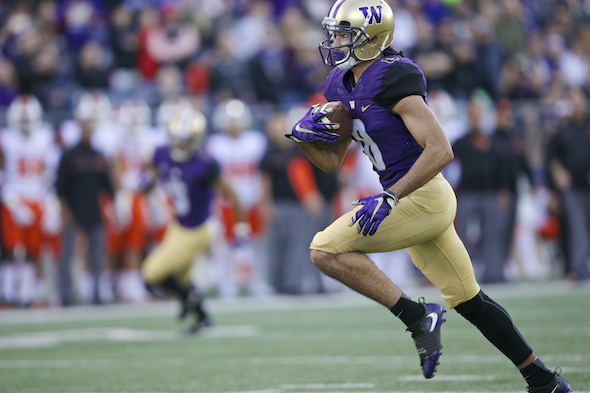 The hostile full house in Salt Lake City, the quality of Utah’s pass rush and the injury absence of fifth-year senior guard Jake Eldrencamp suggested that Saturday might not be the best day for QB Jake Browning to enhance his Heisman Trophy candidacy.

Then late in the fourth quarter, he pooch-punted the Utes to their own 1-yard line, setting up events that kept fourth-ranked Washington undefeated at 8-0. Quarterback as punter? To beat a 17th-ranked team at home, a legit Heisman candidate has to distinguish himself any way he can, especially on a day when he completed only 12 passes.

Washington’s tense 31-24 triumph will be remembered for the decisive 58-yard punt return by WR Dante Pettis with 3:25 remaining, his fifth career scoring return, a program record. But without Browning’s perfect punt from fourth-and-eight at the Utah 41-yard line, the game could have gone haywire.

After the punt, the Huskies defense held the risk-averse Utes, quarterbacked by ex-UW player Troy Williams on a shaky afternoon, to two yards and forced a three-and-out. Star punter Mitch Wishnowsky had to punt from the end zone, requiring premium protection for his rugby-style form.

“I knew they didn’t want it blocked, so I knew I would have a little more time,” Pettis said. “I went back five yards to begin with. I knew if I got tackled right there (coach Chris Petersen) would have been really mad. So I slipped out of that and our guys did a good job blocking. There was open space, and that was it.”

Indeed, the Utes were so thrilled at avoiding mishap on their possession that they lost form on the punt return. Pettis slipped two tacklers and was free by the Utah 40.

“I got to the 40 and thought there were more (would-be tacklers) than there were,” he said. In fact, three of them were knocked down on blocks to the back, but all fouls went uncalled.

Even though Utah had one more possession that reached inside the UW 30, the game had been lost after the predicament created by Browning, the Dawgs’ king of the pooch.

Up to that point, the Huskies were in peril often by their own hand. An interception of Browning, only his third of the season, was turned into a touchdown that revived Utah after a 14-0 deficit. And two third-down penalties on LB Azeem Victor, Washington’s leading tackler with 16, sustained Utah’s other two TD drives.

The first foul, for trash-talking his former teammate, Williams, following a sideline tackle, was deemed “stupid” by Huskies head coach Chris Petersen, who pulled Victor temporarily from the game.

“Twice we stopped them, and we killed ourselves with penalties,” Petersen said. “Those are huge and we’re lucky it didn’t cost us the game.”

Utah was UW’s toughest foe so far because it matched up well with both Huskies’ lines. The defense had a hard time catching up with senior RB Joe Williams, who ran for 172 yards on 35 carries.

“Utah has a really physical line and heck of a back to go with it,” Petersen said. “It’s hard to stop them. (Poor) tackling shows up when guys are out of their gaps, or collapsing because they’re trying too hard. ”

Fortunately for the Huskies, they had a counter-punch in RB Myles Gaskin, the Pac-12 Conference’s leading rusher who had 151 yards on 19 carries. The Utes seemed dedicated to pressuring Browning, who finished 12 of 20 for a season-low 186 yards.

“I gotta respect how Myles ran the ball today,” Petersen said. “We didn’t have a lot of plays blocked cleanly. He showed up big. Utah did a nice job disguising coverages.”

Unlike nearly all of Washington’s foes this season, Utah proved the Huskies can be slowed. Washington’s three touchdown drives were paradigms of efficiency, but on the others, Utah’s coverages and blitzes frequently disturbed Browning. And Joe Williams, who could be the best back in the Pac-12, slapped any smugness from the grills of the Huskies’ defenders.

The Huskies did make one other point: The transfer of Troy Williams worked out well. He missed nine of his 11 passes in the first half, and although he recovered well in the second half he was a greater threat with his scrambles because he’s not even an average college passer.

If he could just punt, he might become a real threat.