The Seahawks killed themselves with 11 penalties, allowed the Saints to score on six consecutive possessions to lose 25-20 Sunday at the Superdome in New Orleans. 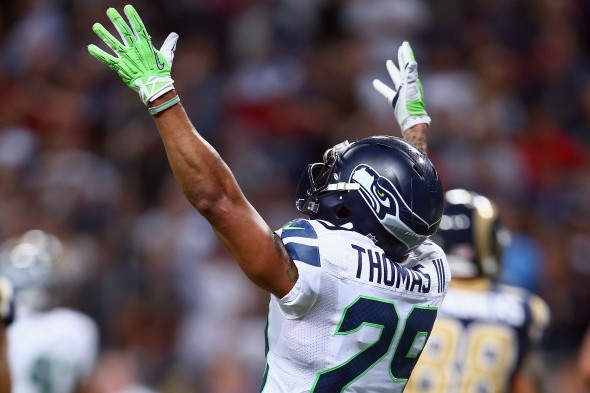 Drew Brees orchestrated six consecutive scoring drives and New Orleans secured a 25-20 victory over the Seahawks Sunday in the Superdome when QB Russell Wilson and WR Jermaine Kearse couldn’t connect on a touchdown with two seconds remaining (box). On the final play, Wilson lofted a pass in the right corner of the end zone. Kearse came down with the ball but couldn’t keep both feet inbounds, ending a contest Seattle lost largely due to unforced errors.

The Seahawks, a six-point favorite in their first trip to the Big Easy since 2010, fell to 4-2-1, their only consolation the fact that the Arizona Cardinals (3-4-1) lost to the Carolina Panthers 30-20 in Charlotte. Seattle retains a 1.5-game lead over the Cards in the NFC West.

Seattle had a 17-16 lead with 3:14 remaining in the third quarter, but the Saints went up 22-17 on a two-yard pass from QB Drew Brees to WR Brandin Cooks. Coach Pete Carroll and the Seahawks howled intensely and unsuccessfully that Saints slot receiver Willie Snead threw an illegal pick on the play and should have been flagged for pass interference. Replays seemed to confirm the infraction, at least the second missed pick of the game.

The play stood, although following the TD, the Saints’ attempt at a two-point conversion was blown up by DE  Cliff Avril.

After Wilson completed six passes on Seattle’s ensuing drive, the Seahawks settled for a 21-yard Steven Hauschka field goal to make it 22-20. Then came the key play, Seattle’s 11th penalty of the game.

With New Orleans facing third and five with 4:40 left, the Seahawks kept Brees from completing a first-down pass. But CB Richard Sherman was flagged for holding, giving the Saints an automatic first down. Brees immediately hit Cooks for 21 yards, then Wil Lutz drilled a 41-yard field goal. As important as taking a 25-20 lead, the Saints bled more than two minutes off the clock and forced Seattle to exhaust its timeouts.

By the time Seattle had the ball back at its 32-yard line, only 1:57 remained. Wilson pushed the Seahawks into scoring position with three big passes: A 14-yard completion to RB C.J. Prosise, a 27-yard strike to WR Doug Baldwin and an eight-yard shot to Prosise. But at the 10-yard line with no time remaining, his potential game winner to Kearse didn’t work.

Wilson completed 22 of 34 for 253 yards, but failed to throw for a touchdown — or run for one — for the third consecutive week. He also threw his second interception of the season, which set up a Brees’ one-yard TD run just before halftime. Wilson’s INT was his first in 203 attempts and came immediately after he opened the game 8-for-8, the best passing start in any game of his career. Wilson finished with a season-low rating of 74.8.

The Seahawks had a season-high 11 penalties (New Orleans had two), including a pair on rookie LT George Fant, that helped keep Seattle to 74 rushing yards. RB Christine Michael led Seattle with 40 and scored a touchdown that put Seattle in front 14-3 in the second quarter.

Michael’s TD was set up by Wilson’s 23-yard completion to WR Paul Richardson plus a trick play, a Wilson pass to WR Tanner McEvoy, who completed a 43-yard pass to Prosise to the New Orleans two-yard line.

Prosise (80 yards), Kearse (57) and Baldwin (51) each caught four passes, but TE Jimmy Graham, making his first visit to New Orleans since the Saints traded him to Seattle in 2015, was largely a non-factor, catching three balls on five targets.

For the second consecutive week, Seattle’s offense did a poor job of keeping its defense off the field. The Seahawks had the ball only 23:48 to 36:12 for the Saints.

The Seahawks twice stopped the Saints inside the five-yard line, forcing field goals, but Brees did a masterful job controlling possession by completing 27 of 35 throws, including eight on third down. He finished with 265 yards, 138 below his per-game average over New Orleans’ previous five home contests. Seattle allowed 11 more than the 14 points per game it averaged entering the game.

FS Earl Thomas scored Seattle’s first TD on a 33-yard fumble return. Avril popped the ball loose from RB Mark Ingram straight into Thomas’ hands. It marked the first fumble return TD by a Seahawk since Bobby Wagner against Arizona Nov. 15, 2015, and the second TD of Thomas’ career. He scored on a 57-yard interception return against Buffalo Dec. 16, 2012, in Toronto.

Wagner led Seattle with 15 tackles (11 solo) while SS Kelcie McCray had 10 (6 solo) after playing 95 snaps last week against the Cardinals. DE Frank Clark, who received the majority of snaps that would have gone to the injured Michael Bennett (knee), recorded one of Seattle’s two sacks. Avril had the other.

The Seahawks held the Saints to 375 total yards, 46 below their season average.