Russell Wilson couldn’t throw deep Sunday, nor could he run well. But he missed a victory by about one foot. Seahawks coach Pete Carroll thinks a turnaround is not far away. 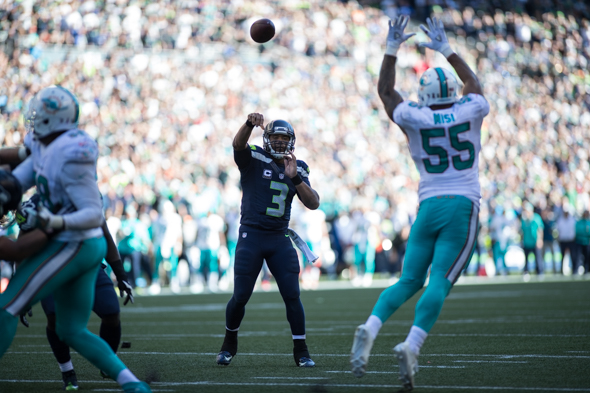 Russell Wilson against Miami, when he could do things like throw touchdown passes. / Drew McKenzie, Sportspress Northwest

Lamentations run heavy over the absence of offense — one touchdown in the past nine quarters, resulting in a tie and loss — but it’s become apparent that QB Russell Wilson’s injuries have compromised play-calling and execution more than the Seahawks previously let on.

In the wake of the 25-20 loss in New Orleans Sunday to a Saints team with a weak defense, coach Pete Carroll acknowledged Monday that a priority has been put on saving Wilson’s body by cutting risks.

For the first time since week two, Wilson played Sunday without ankle braces. But he still has a brace on his right knee, and the latest trauma, a pectoral muscle injury, limited his ability to throw deep Sunday. The Seahawks’ longest pass play, 43 yards, was thrown by WR Tanner McEvoy. Wilson rarely threw a pass more than 15 yards, one of which was intercepted.

“There was a little bit of that in the game,” he said of the absence of the long ball. “He wasn’t able to let it go all week long (in practice).  We were limited until we saw him throw the ball a little bit. He did a good job of not wasting throws during the week (as we tried to) determine whether he could, and knowing he would be OK. ”

The ankle and knee braces were bothersome.

“He would tell you it just feels cumbersome,” Carroll said. “He still has ankles taped. It was just like wearing a knee brace. It feels like you’re carrying a lot of extra weight.

“He was pleased he made it through (without the ankle braces). He felt better. He looked better during the week of practice. He came out of the game not nicked at all in any of the multiple areas that we’re concerned about.”

Carroll acknowledged that they have stripped down the playbook.

“There’s elements of the run game this year that are different than last year,” he said. “Part of it is we haven’t allowed  him to run very much. He’s been very effective over the years, and we’ve had to take care of him. He’s getting better . . . getting better. We’re excited about that.”

He needs to get fired up about something because the 6-6 tie with Arizona that preceded the Saints loss comprised a stretch as feeble offensively as at any time in Carroll’s seven-year Seattle tenure. The Seahawks are 28th in the NFL in rushing at 81.4 yards a game, which includes all three of the yards on the ground in Sunday’s first half.

The No. 1 rushing team in the NFL, a spot often occupied by the Seahawks during the Marshawn Lynch empire, belongs to Dallas at 164.1 yards per game. Second, 10 yards back, is Buffalo, Seattle’s next opponent, at the Clink on Monday Night Football. The Bills’ emphasis is what Carroll seeks.

“We need to get out of what we’ve been in the past two weeks,” he said. “This is not the way we’re going to play football. We’re going to fix this. It’s happened back-to-back on us, in similar fashion. We need to dig in with the running game. It’s frustrating to say that.

“I can’t wait to get back on the practice field. We all feel the same way. It will look different.”

Carroll was almost defiant in his confidence that solutions are imminent.

Getting Wilson healthier is the primary source of his conviction.

The fact that he made it out (healthy) again, we can get started,” he said.  “He’s done everything he can do to help us (considering) the limitations we put on him to keep him safe and sound and playing. He’s busting at the seams, ready to go.”

An admirable sentiment, and one play too late to help the Seahawks Sunday. The Seahawks had the ball at the Saints 10-yard line with two seconds remaining, trailing by five. As Wilson came to the line, he saw a pending blitz, and a probable double-team of TE Jimmy Graham, the preferred red-zone target.

WR Jermaine Kearse on the right had single coverage by a smaller cornerback. But instead of a slant, Kearse ran a fade. Wilson lofted the ball too high. Kearse caught it at the back of the end zone but with only one foot inbounds.

According to Carroll, Wilson changed the protection properly but didn’t have time to signal a route change to Kearse before the play clock expired.

“It was a well-disguised blitz,” Carroll explained on his ESPN 710 morning radio show. “You couldn’t tell it was an all-out blitz until the final movement of the free safety. It took Russ awhile for him to detect it. They didn’t show right away.

“He had to go with what was called and make the most of that. We missed by inches. If it didn’t happen so late, he might have done a couple things different.”

For all the hand-wringing, Carroll was aware that the Seahawks are 4-2-1 and atop a division where the problems of the foes make the Seahawks’ worries of hangnail caliber.

“I think we may have been fortunate to be as far along as we are right now, with everybody coming back together,” he said. “Russ will be at his very best — I don’t know that he’ll be 100 percent — but you’re going to see things happen that will make us better.”

If not, there’s always the now-traditional McEvoy platoon for the deep throws. There’s no reason a copycat league like the NFL can’t steal from baseball.

Rookie LT Fant gets an attaboy

George Fant, who last started in a football game at the pee-wee level, started at left tackle Sunday and received a gold star from Carroll.

“Once he settled in, he did some things very well,” he said. “We were pleased with his ability to be consistent throughout the game. For his first game, it was impressive. It gives a chance to think he can compete and play there.”

But Fant committed three of the Seahawks’ 11 penalties: A false start, clipping and a block in the back (mistakenly charged to C Justin Britt). Unlike his basketball days at Western Kentucky, where Fant was a star, he can’t foul out in football.

DE Michael Bennett with have arthroscopic surgery on Wednesday that will keep him out two to three weeks, meaning he will miss at least the Buffalo game and at New England . . . DT Tony McDaniel will play against Buffalo. He came out of Sunday’s game late with a sore ankle, but it was not serious . . . RB Thomas Rawls went through a “vigorous” running workout Monday and came out well, but will not be ready by Monday. “He”s close,” Carroll said. “We have to make sure of his conditioning. He’s got to make it back so he stays back.”  . . . The groin injury of SS Kam Chancellor lingers, and will be a game-time decision as to whether he will miss a third straight game . . .  TE Luke Willson (arthroscopic knee surgery) is also running. “He said Buffalo, so we’ll see,” Carroll said. “It would be an amazing accomplishment.”