Huskies to open 2018 vs. Auburn in kickoff game

The Washington Huskies will launch the nartional 2018 football season in Atlanta with a game against the Auburn Tigers in the Chick-fil-A Kickoff Game. 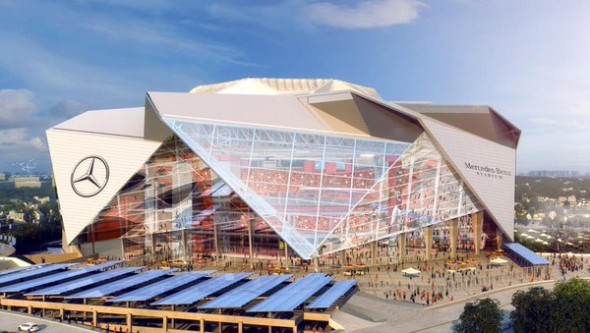 Mercedes-Benz Stadium in Atlanta will open in 2017.

The University of Washington football team, roundly criticized for the lameness of its first three opponents (Rutgers, Portland State, Idaho) this season, will commence its 2018 schedule in the Chick-fil-A Kickoff Game against the Auburn Tigers of the Southeast Conference.

The game will be played in Atlanta Sept. 1 in the new, $15 billion Mercedes-Benz Stadium under construction.. The facility opens in 2017 and will host the 2018 College Football Playoff national championship, the 2019 Super Bowl and the 2020 NCAA Final Four.

The meeting will be the first between Washington, ranked No. 5 in the College Football Playoff rankings, and Auburn, ranked No. 9. The Huskies are the first members of the Pac-12 to represent the conference in the season opener. The game will be televised nationally by ESPN.

In its previous editions, the Chick-fil-A Kickoff Game has averaged 67,000 in attendance. It is scheduled to have a $4.7 million payout per team,higher than 24 bowl games last season.

“We are excited,” coach Chris Petersen said. “I know our team will look forward to competing against a great program in what will surely be a thrilling atmosphere inside the new Mercedes-Benz Stadium.”

Created in 2008 by Peach Bowl, Inc., the Chick-fil-A Kickoff Game is a bowl-style, neutral-site game featuring two elite football programs and has been nationally televised on the first Saturday of the college football season.