Brian Schmetzer will be the new full-time head coach of the Seattle Sounders, the second man to ever hold the position after Sigi Schmid was dismissed in July, midway through his eighth season with the club. 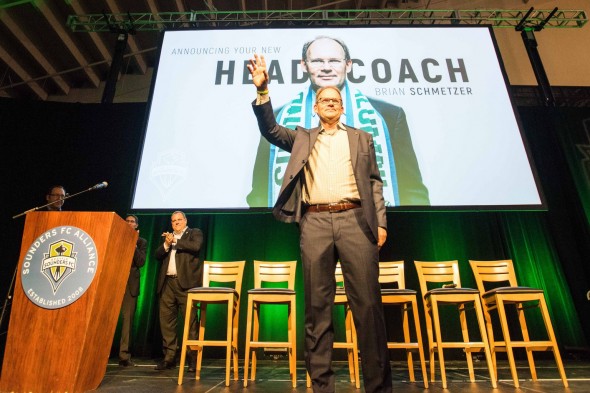 Brian Schmetzer formally had the interim tag removed from his coaching title at the Sounders’ annual public business meeting Wednesday night, to vocal approval from shareholders, players and executives. Schmetzer’s position was secured when he turned around the worst season in club history in time to clinch fourth place and a ticket to the Western Conference playoffs.

When he took the helm of the club, the Sounders were 6-12-2, sitting near the bottom of the West’s dust heap. Schmetzer, a Seattle native, played for the NASL Sounders and coached their USL incarnation from 2002-2008 before becoming Sigi Schmid’s assistant head coach for the MLS transition. At first, some thought he was just there to hand in the lineup sheets and get the rest of a dismal season over with.

“With Brian, I said: ‘Look, we’ve averaged one point per game in 20 games,” Lagerwey said Thursday. “You’ve got three months. All you’ve got to do is double the output and the job is yours.”

Given how the team looked at the time of Schmid’s ouster, Schmetzer was facing an Everest-sized climb. Losing star player Clint Dempsey to an irregular heartbeat for the rest of the season one month into the job was like realizing you left your parka at home halfway up the slope.

But Seattle kept climbing, thanks to the addition of designated player Nicolas Lodeiro, the healthy return of center back Roman Torres, and the maturation of rookie striker Jordan Morris.

Heck, even Nelson Valdez, who hasn’t scored a regular season goal in more than a year has chipped in, snagging game-winners in both of Seattle’s playoff contests.

His first day in charge, Schmetzer labeled himself as a “steward of the club,” there to make sure players took the appropriate responsibility to produce wins.

Schmetzer’s policy of accountability has paid off. The Sounders now look different from the dour, thousand-yard stares of training sessions during the depths of Seattle’s depression. At a rare sunny November training session, players laughed and joked as they went about the task of preparing for the second leg of the semifinals against FC Dallas Sunday (6 p.m., FS1), where they hold a 3-0 aggregate lead after the first leg.

Schmetzer is rightfully proud of how his team handled the transition.

“The response has been good since we’ve taken over,” Schmetzer said. “They believe it, and that’s what makes me proudest, that they actually believe that it’s their team. Guys can say stuff, but you see on the field how they play. I think they really believe that they can do something special this year.

“Even if it doesn’t culminate with anything larger, they believe that they can win every game. They should reward themselves for the hard work, and they enjoy coming out with their teammates and working. That’s the spirit of this group.”

It made Lagerwey’s search for a full-time replacement easy. Seattle is 10-2-4 under Schmetzer, including a tight 1-0 win against Sporting Kansas City in the knockout round of the MLS playoffs.

“Was I holding back in a sense waiting to see how things would play out?” Lagerwey said. “I guess, yes, but also Brian embodies a lot of things I believe in. Promoting from within, having a healthy culture, rewarding people who do well.”

Many thought Schmetzer was an outside-odds candidate at best to replace Schmid, the only coach the MLS Sounders had known and winningest coach in league history. But then, the Sounders were on longer odds to even make the postseason, let alone shock the Supporters’ Shield winners with a 3-0 drubbing in game one of the semifinals.

Schmetzer’s team defied the odds, as did he in the personal journey to a pinnacle job in American soccer.