Fultz helps save Huskies from loss to Western

Lineup limitations, listless defense and a bevy of turnovers meant that the Washington Huskies nearly blew an exhibition game against Western Washington. 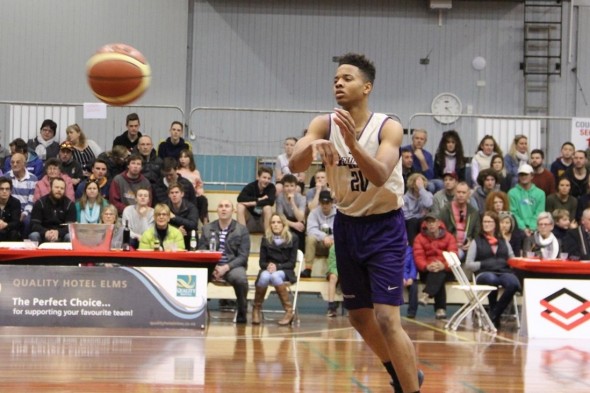 Washington freshman Markelle Fultz was a late hero for the Huskies Thursday. / University of Washington A\athletics

Somehow, the University of Washington men’s basketball team permitted 103 points in an exhibition game to visiting Division II Western Washington University Thursday night. Thanks to schizophrenic defense and 16 turnovers at Hec Edmundson Pavilion, the Huskies nearly had a start-up disaster.

Thanks to 25 points from sophomore guard Dominic Green and a late surge from freshman wunderkind Markelle Fultz, the Huskies prevailed 109-103 to stave off serious embarrassment.

Sharp shooting from Western’s Taylor Stafford (6-for-19, 23 points) and a game-high 28 points from senior forward Jeffrey Parker were a big part of the reason the Vikings were in front, 87-84, with 4:21 to play.

He danced his way through a pair of defenders from the top of the key, pulling the ball behind his back on his way to a short jumper. Seconds later, the Huskies found Fultz in transition along the baseline. He drove past two defenders underneath the hoop, tossing up a reverse layin as he moved past the glass.

On the ensuing possession, Fultz grabbed a defensive rebound,  drew a foul and sank both free throws. He pulled off a six-point swing of his own invention to put Washington on top for good.

“He’s not your normal freshman,” coach Lorenzo Romar said of Fultz. “It’s one thing to have freshman that are talented, it’s another to have someone that’s a level above. He’s one of those guys. He comes in and does things like that. He had some key rebounds, he guarded, he did a lot more than just make those baskets.”

With shortened minutes and tired legs, it’s not clear if the level of hype around Fultz is fully deserved. But his critical performance won’t diminish it.

Romar acknowledged that the defense was lethargic.

“Right now, we are not paying attention to the details,” Romar said. “Stafford, a phenomenal shooter . . .  there were a number of times he shot the ball and (our hands were low). You have to contest that. That burned us a number of times.”

The other contribution to a slow start was the odd starting lineup.

A concussion meant that sophomore forward Noah Dickerson was out, something Romar noted as a key loss on both sides of the ball. Fultz, who received votes in the Associated Press Preseason All-America tabulation and has been hailed by some as a future No. 1 draft pick in the NBA, played just 23 minutes due to Romar’s desire to rest the freshman after a grueling training camp.

The starters earned their spot by winning the most rebounds in practices leading up to the game. That meant that big men Sam Timmins, Matthew Atewe and Bitumba Baruti all claimed starting slots along forward Matisse Thybulle and guard David Crisp.

Even after Romar rotated his regular starters into the lineup, the game remained sloppy. The Huskies’ turnovers led to 22 points for the Vikings. The game also included 62 personal fouls, 35 for Western and 27 for Washington, strangling the flow of play to little more than a trickle.

“Negligence,” Romar said of the fouls. “That was disappointing. Not to take anything away from Western, but they’re not exactly a team that’s out there pressuring. There were too many careless turnovers. That’s going to bite us if it becomes a pattern.”

“Paying attention to detail on defense,” he said. ”Making sure that that’s what gets us upset, if we don’t do a good job. We’ll continue to show film, we’ll continue to talk about it, and put those guys in the game that are going to do it.”