Former Seahawks WR Percy Harvin has come out of retirement to play for the Bills in the Monday night game at the Clink. For the Seahawks, LT Bradley Sowell is out, but Carroll isn’t saying who’s in. 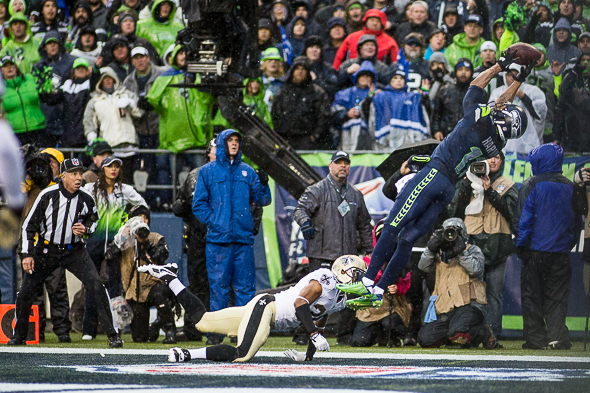 In a playoff game against the Saints, Percy Harvin was concussed on this play. / Drew McKenzie, Sportspress Northwest

One of the Seahawks’ most controversial players, WR Percy Harvin, will play for the Buffalo Bills Monday night, coming out of a six-month retirement this week in time for the trip to Seattle. The 4-4 Bills have multiple injured receivers.

“I feel good about Percy,” Bills coach Rex Ryan told reporters after practice Saturday in Orchard Park, NY. “I didn’t say we’ll play him 50 snaps, but I will play him . . . I think we can play him some, I do. He looks good out there. The conditioning part of it and doing the football-specific things are obviously not to where he would be if he was here the whole time, but I think he can help us.”

Harvin, 28, was traded in October 2014 to the New York Jets after playing in parts of two seasons for Seattle because of injuries, dysfunction and insubordination. He fought with WRs Golden Tate and Doug Baldwin, and refused to return to a game against the Dallas Cowboys.

Harvin hasn’t played since Oct. 11, 2015. He was signed by the Bills as a free agent after a single season with the Jets, then coached by Ryan.

Harvin faces a Seahawks defense without two of its best players, DE Michael Bennett (knee surgery) and SS Kam Chancellor (groin), who will miss his fourth consecutive game. But Seattle will have back two other starters, OLB Kevin Pierre-Louis and DT Tony McDaniel, both of whom have recovered from ankle injuries.

The intrigue is at left tackle, where incumbent Bradley Sowell will miss his second game with a sore knee.

“He’s just surviving the early parts of practice,” coach Pete Carroll said after practice Saturday. “He’s not ready to go yet. We were hoping that he might make a turn but that has not happened yet.”

That seemed to indicate the Seahawks would go again with undrafted rookie George Fant, but Carroll said not so fast.

Fant, in his first football start since pee-wee ball, replaced Sowell in the 25-20 loss at New Orleans Sunday. Carroll praised Fant’s play for a first-timer, but there was no getting around the four penalties, including two majors, Fant had that helped kill drives.

Carroll’s options for surprise seem minimal. Veteran reserve J’Marcus Webb is always a possibility, but he was passed over last week. Another option could be the move of Garry Gilliam from the right side to the left, but that would mean disrupting two positions on an already shaky unit.

Or, Carroll could be playing games with Bills defensive coordinator Rob Ryan.

Carroll said he expects a return by Chancellor shortly.

“I really hope he’s going to be on the practice field by next week,” he said. “I’m kind of optimistic about stuff like that.”

The start will again be taken by Kelcie McCray, whom Carroll said is improving.

I think we’re better at it, yeah,” he said. “The more time that Kelcie gets back there with the guys, it’s really just about communications and really being sharp and precise in our evaluation of what’s going on. He’s played well,  It’s just making sure that we’re maximizing all of the calls and opportunities that we have.”

After arthroscopic surgery in Los Angeles to clean up cartilage damage, Bennett returned to team headquarters in Renton Friday.

“We just have to see how he responds in the first few days and see how quickly he can come back, “Carroll said, then referred to a similar procedure on TE Luke Willson’s knee  a couple of weeks ago. “I was raving about Luke (running) in two weeks. I’m challenging (Bennett) to see if he can stay with that kind of time frame.  He’s very optimistic about it.”

Willson has yet to practice, so is unavailable Sunday. The return of RB Thomas Rawls has been pushed back, meaning he’s likely unavailable for next week’s game at New England.

Impressed by improved mobility for QB Russell Wilson, Carroll said the Seahawks may have had their best practice week of the season.

“I think these might have been the three best back-to-back days we’ve had,” he said.” I can’t really tell you why. But the intensity and energy was there, maybe because Russell was really at his best, and (TE Jimmy Graham) was at his best.”

The Seahawks, 15-3-1 in prime time games under Carroll, are seven-point favorites in the Bills’ first visit to Seattle since 2004.