Huskies remain at No. 4 in AP, coaches rankings

Washington remained at No. 4 in both the Associated Press and coaches polls, but the one that counts — the College Football Playoff rankings — will be released Tuesday. 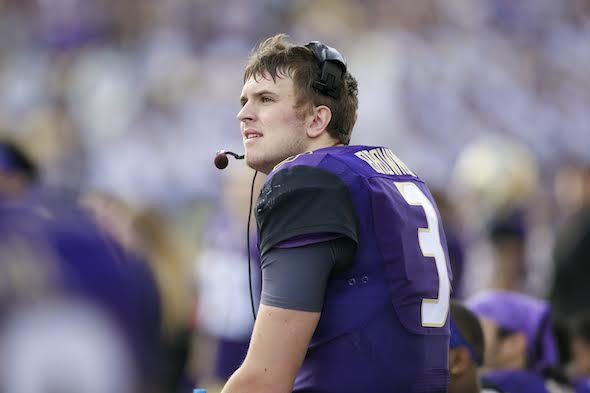 Washington’s 66-27 rout of unranked California late Saturday night predictably did nothing to elevate the Huskies in the Associated Press and coaches polls released Sunday. They stayed at No. 4 in both due to impressive wins by the three teams ahead of them, but the poll that now counts most  — the FBS College Football Playoff rankings — will come out at 4 p.m. Tuesday.

Washington was No. 5 in the initial CFP ratings last week behind No. 1 Alabama, No. 2 Clemson, No. 3 Michigan and No. 4 Texas A&M. But the Aggies lost Saturday, 35-28 to unranked Mississippi State, providing the Huskies an opportunity to vault into the top four. They took advantage with their overwhelming win at Cal, but it’s possible that No. 6 Ohio State could leapfrog them due to the Buckeyes’ 62-3 shellacking of No. 10 Nebraska.

The 66 points by Washington Saturday night were the most against Cal since a Gil Dobie-coached UW team beat the Bears 72-0 in 1915.

QB Jake Browning has a school-record 34 TD passes, one more than Keith Price in 2011 . . . Browning’s six TDs vs. the Bears tied his own mark, set at Oregon Oct. 8. He is the only FBS quarterback to throw six TDs in a game twice this year . . . Browning has four or more TDs four times this season, another school mark.