The Seattle Sounders lost to FC Dallas 2-1 Sunday in Texas, but advanced to the Western Conference finals where they play Colorado in a home and away series beginning at the Clink Nov. 22. 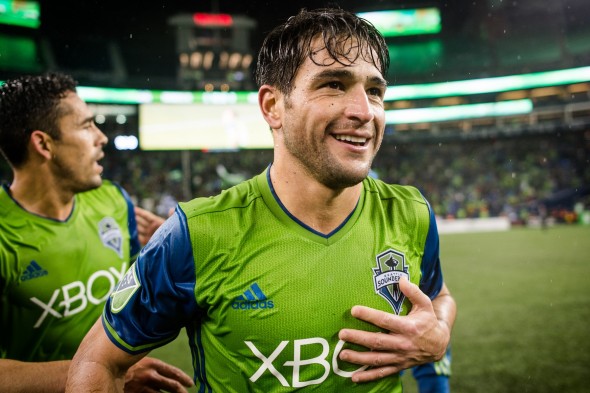 The aggregate-score victory eliminated FC Dallas, Supporters’ Shield winners and U.S. Open Cup champions, from the playoffs. Seattle will host the first leg of the Western Conference finals against the Colorado Rapids Nov. 22 (7 p.m., FS1), before playing the away leg Nov. 27.

Lodeiro’s goal was set up by right back Tyrone Mears. Mears gave chase to a wayward pass from midfielder Erik Friberg, but was beaten to the ball by Dallas center back Walker Zimmerman. Mears picked the ball away from Zimmerman, however, and raced into the penalty area before picking out Loeiro in front of the net for the easy tap-in.

Lodeiro’s goal put the Sounders up 4-1 on aggregate scoring. Since road goals are the primary tiebreaker, his tally meant Dallas would need to score five goals to win the series.

The goal was the result of an inspired second half from Seattle after a lackluster first 45 minutes.

Seattle conceded a goal in the 25th minute after Tesho Akindele got on the end of an Atiba Harris cross and banked it off the crossbar into the net to give Dallas hope. In the 78th minute, several Sounders jumped in front of a series of close-range shots to keep FC Dallas from scoring.

“There wasn’t much ebb and flow,” Schmetzer said. “It was one-way traffic. We were under the gun. I think we were able to withstand most of that. Although Dallas came strong, we were able to win the majority of the duels and that was what enabled us to persevere.”

Seattle’s third trip to the West finals was keyed on hard-nosed defending after Lodeiro’s goal. Goalkeeper Stefan Frei made a one-on-one save against Harris in the 20th minute.

The Sounders looked sharper in the second half, though they had key losses due to injury. Rookie forward Jordan Morris was removed after halftime with a thigh injury, and was seen with an ice pack on his left hamstring as he sat on the bench in his warmup gear.

“Even though we prepared them for that onslaught, it took them a while to get their feet under them,” Schmetzer said of his team. “I think the spine of the team was able to persevere in key moments to get passes that would relieve some of the pressure. After (Lodeiro’s) goal, Dallas had to push numbers, and we were able to connect passes and get some counter-attacking opportunities.”

Nelson Valdez, who figured heavily in several near-misses for Seattle, left the game in the 58th minute, after he appeared to injure his calf jumping for a ball that led to a second goal for Dallas. Valdez’s turnover was finished into the net by Maximiliano Urruti when he was found by another unmarked header after play continued with Valdez down.

With Clint Dempsey out for the year with an irregular heartbeat, Morris and Valdez are Seattle’s best attacking options as the playoffs draw to a close. But the long break before the conference finals should give them  a chance to heal.

Seven Sounders have been called in to play for their national teams during the international break in league play. The pause will last the two weeks before the start of the MLS conference finals, so players should be back.

Roman Torres, who has missed the past two games for Seattle due to injury, has been called in to serve as captain for Panama for its Cup qualifiers. Joevin Jones will join his native Trinidad & Tobago for CONCACAF qualifiers, while Damion Lowe will take on national team duty for Jamaica.

Valdez, a long-running talisman for his native Paraguay, has played his way back onto the roster for Los Guaranies after snagging a pair of crucial playoff goals for the Sounders against Sporting Kansas City and FC Dallas.