The Mariners Monday acquired veteran catcher Carlos Ruiz from the Dodgers in a deal that sent 29-year-old reliever Vidal Nuno to Los Angeles. 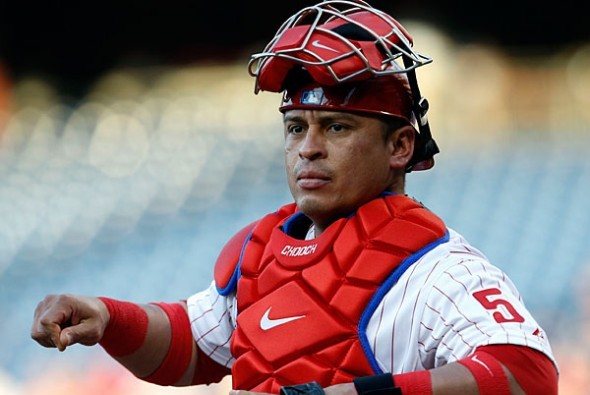 Catcher Carlos Ruiz is headed to the Mariners. / Wiki Commons

The Mariners made it official Monday afternoon, announcing they have acquired veteran catcher Carlos Ruiz from the Los Angeles Dodgers in exchange for lefty reliever Vidal Nuno. Disclosure of the deal, rumored since late Sunday, was reportedly held up while the clubs evaluated the medical histories of the players.

The Mariners last week decided to move on from veteran catcher Chris Iannetta. His backup for the first half of 2016, Steve Clevenger, also opted to become a free agent, leaving Seattle with presumed 2017 starter Mike Zunino and spot starter Jesus Sucre on their MLB roster. To acquire Ruiz, the Mariners will pick up his $4.5 million option for 2017.

The 37-year-old Ruiz was an All-Star in 2012 with Philadelphia when he hit .325 with 16 home runs in 114 games. Last year, he had a combined .264 batting average with three home runs and 15 RBIs in 62 games with the Phillies and Dodgers, who acquired him in a midseason trade.

In the postseason, Ruiz had a .273 average with one home run and four RBIs. Ruiz previously played 46 games in the postseason with the Phillies, helping them win five NL East crowns.

The 29-year-old Nuno spent the past two seasons with Seattle after the Mariners acquired him in a multi-player trade with the Arizona Diamondbacks. Nuno appeared in 87 games for Seattle, compiling a 2-5 record with a 3.85 ERA. Last year, he made 55 appearances, including one start, finishing 1-1, 3.53.