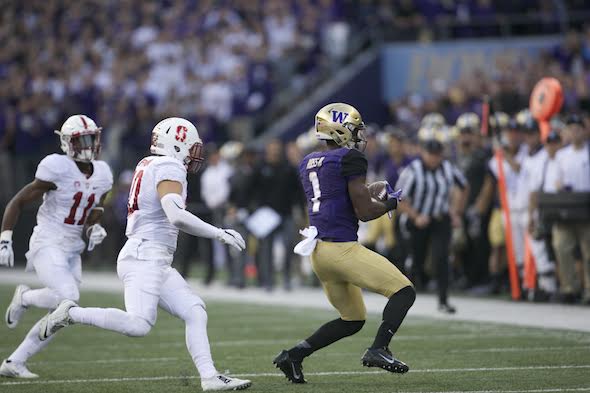 The Pac-12 Monday selected Washington WR John Ross and DB Sidney Jones as its Offensive and Defensive Players of the Week following the Huskies’ 66-27 romp over California Saturday night. That news was tempered, however, with the announcement that DE Joe Mathis has undergone foot surgery and will miss the remainder of the season.

Ross, a Long Beach, CA., native, had six receptions for 208 yards and scored three times against the Bears. The yards are the fifth-most in UW history and represent the first 200-yard game by a UW receiver since Charles Frederick had 216 at Oregon State in 2003.

Ross scored on pass plays of 67, 60 and 6 yards, all in the first half, to run his season total to 14 touchdowns. He stands second all-time in UW single-season TD reception history, trailing Mario Bailey, who had 18 in 1991.

Ross also was recognized nationally by having his name added to the Biletnikoff Award watch list. The UW receiver ranks second nationally in touchdown receptions and is second in the Pac-12 in receiving yards (742) and average per game (82.4).

Jones, a Diamond Bar, CA., product, picked off two passes, snagging both in the decisive third quarter when the Huskies outscored Cal 21-0 to put the game away. Both of Jones’ takeaways led to touchdown drives.

Two other Huskies have won weekly awards this season, including LB Psalm Wooching (defense, Oct. 3) and QB Jake Browning (offense, Oct. 10). Browning was not even nominated for the offensive award this week despite tying his own school record with six touchdown passes.

Mathis, Washington’s leader in sacks with five and its co-leader in tackles for loss (7.5), did not play against Oregon State, Utah or California. He reportedly injured his foot in practice, and rehab wasn’t making sufficient progress

Mathis is a senior from Ontario, CA., with no eligibility left.  Mathis’s starting spot has been taken over by Connor O’Brien, a 6-3, 232-pound junior from Trabuco Canyon, CA., and supplemented by Benning Potoa’e, a 6-3, 270-pound redshirt freshman from Dupont and Tacoma’s Lakes High School.

“It’s unfortunate that he can’t finish his senior year out here,” coach Chris Petersen said of Mathis Monday. “Football is really important to him. He’s such a good player for us. I think all the things that he’s been through, on the field, off the field, have put him in a position to handle this one better. I think he’s really positive. He’ll get his foot fixed and try to keep playing.”