The Seahawks fell behind early, rallied to take a 28-17 lead, then had to fend off the Buffalo Bills inside the final minute ito secure a wild 31-25 victory Monday night. 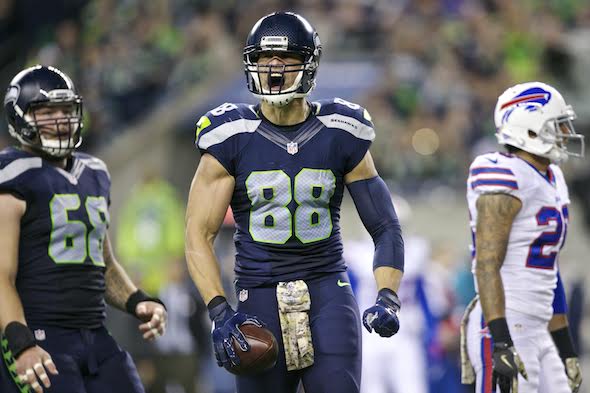 Despite staggering ineptitude in their running game — 12 carries for 33 yards — and a defense that bent and crumbled often, the Seahawks produced two superlative stops by DE Cliff Avril and FS Earl Thomas inside the final minute and eked out a 31-25 victory over the Buffalo Bills Monday night in front of a record CenturyLink Field crowd of 69,084 (box).

Not only that, but the Seahawks trailed three times, including 7-0 after the Bills blocked a Jon Ryan punt in the first quarter that led to a 7-0 Buffalo lead. They also stunningly avoided a 15-yard roughing the kicker penalty on CB Richard Sherman just before halftime that probably cost Buffalo a field goal and altered what it had to do on the final possession for a shot at the win.

After the Bills went up 7-0 on QB Tyrod Taylor’s 3-yard run, Russell Wilson ran for a TD, then threw the first of two touchdown passes to TE Jimmy Graham. Christine Michael’s 3-yard TD run at 4:29 of the second quarter, followed by Graham’s second TD, had Seattle up 28-17 at halftime.

The Bills retaliated after a scoreless third quarter with a 1-yard run by Mike Gillislee and Taylor’s two-point conversion. Seattle pushed its lead to 31-25 with Steven Hauschka’s 49-yard field goal at 9:49. A lot of stuff happened over the next eight minutes, not the least of which was Jermaine Kearse nearly catching — or dropping — a TD pass in the end zone. It came down to Buffalo’s final drive.

The Bills took over on their 40 after a 62-yard Ryan punt. With two minutes to play, LB Bobby Wagner sacked Taylor for a 10-yard loss. But Taylor, on 3rd and 21, hit Robert Woods for 22 yards as Wagner was flagged for 15 yards for roughing Taylor. That set up the Bills with a first down at Seattle’s 23 with 1:01 remaining.

With Buffalo facing a third and goal at the Seattle eight-yard line with 52 seconds left, Avril sacked Taylor for a loss of seven yards. On the Bills’ final play, Taylor threw incomplete in the end zone as Thomas broke up the pass, jumping in front of intended receiver Robert Woods.

The Bills would not have needed a TD in that situation if not for bungles by the officials at the end of the first half that cost the Bills a chance at a shorter field goal. Buffalo kicker Dan Carpenter missed a 54-yard attempt on the final play of the half, only after Sherman got away with unnecessary roughness, plus a delay of game penalty on the Bills caused in part by the officiating crew standing over the ball.

NFL head of officiating Dean Blandino told NFL.com that the no-call on Sherman’s hit was wrong, as was the mis-management of the clock by Walt Anderson’s crew that denied the Bills a better chance at a field goal.

Wilson, who had gone three consecutive games without a TD pass or run, threw two touchdowns to Graham covering 17 and 18 yards and scored on a 3-yard run. He completed 20 of 26 for 282 yards and finished with a 137.0 passer rating, highest of the season.

Wilson improved to 6-0 in Monday night games, joining Neill O’Donnell (7-0) and Bob Griese (6-0) as the only quarterbacks in NFL history to win their first six-plus starts on Monday night.

Had it not been for Wilson’s 10 rushing yards on 3 carries (he demonstrated more mobility than in any game since the first week of the season), the Seahawks would have finished with nine carries for 23 yards. Subtract WR Tyler Lockett’s 13 rushing yards on an end-around, and Seahawks running backs had eight carries for 10 yards: C.J. Prosise three carries for nine, Michael five totes for one.

The Seahawks entered the game sporting an all-time franchise low of 3.23 yards per rushing attempt, and averaged 2.8 against the Bills.

Both of Graham’s TD snags were amazingly athletic one-handed grabs. Targeted by Wilson eight times, Graham, less than a year removed from a major knee injury, had eight catches for 103 yards, his third 100-yard receiving game of the season. Graham averaged 12.9 yards per catch.

Wilson connected with seven receivers, including six times on six targets with Doug Baldwin, who finished with 89 yards.

The blocked punt against Ryan in the first quarter was the first against him since Nov. 2, 2014 against Oakland.

The Seahawks gave up 289 passing yards to Taylor, including a five-yard TD to Justin Hunter in the first quarter, and 85 rushing yards to LeSean McCoy. The Bills ran for 162 yards and fooled the defense with every formation head coach Rex Ryan had to offer.

Sherman recorded the 29th interception of his career in the third quarter, picking off a Taylor pass in the end zone and returning it 31 yards. Since 2011, Sherman has six more INTs than any other NFL player.

Buffalo’s second scoring drive covered 17 plays and 75 yards, the longest scoring drive against the Seahawks since Dec. 2, 2011, when Philadelphia also had a 17-play scoring march.

Former Seahawks WR Percy Harvin, who came out of retirement four days ago,was in for several of Buffalo’s snaps but did not catch a pass.

The Seahawks extended to 11 their streak of wins on Monday Night Football, and also improved to 23-8 on Monday Night and to 16-3-1 in prime-time games under head coach Pete Carroll . . . The Seahawks also improved to 8-5 all-time against the Bills, who were seeking their first win in Seattle since Nov. 8, 2004 . . . Wilson notched the 51st win of his career (regular season), fourth-most in the first five seasons of a career (record is 56 by Atlanta’s Matt Ryan) . . . Wilson is 31-5 at the Clink . . . Seattle extended to 96 its streak of games with a lead, or within one score of the lead, in the fourth quarter . . . . .Hauschka has scored in 86 consecutive games, an on-going franchise record.

The Seahawks travel to New England to face the Patriots Sunday at 5:30 p.m (NBC). The game is the first between the clubs since Super Bowl XLIX, which New England won 28-24.