The Seahawks were beneficiaries of a pair of officiating mistakes: A missed call of unnecessary roughness on Richard Sherman, followed by a mismanaged play clock that cost the Bills a critical field goal. 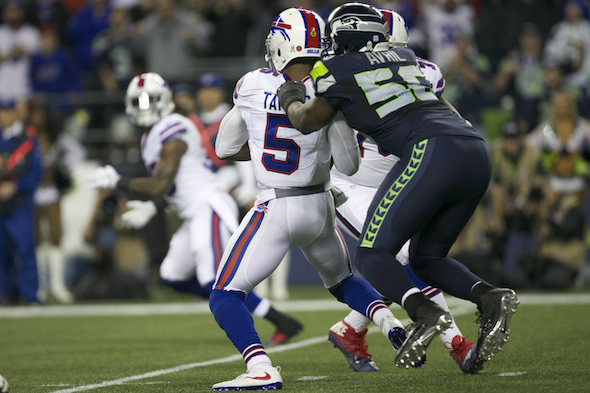 The Seahawks defense got to Bills QB Tyrod Taylor for five sacks, including this one from Cliff Avril  half. / Drew Sellers, Sportspress Northwest

As a record 69,084 at CenturyLink Field Monday night howled, the Seahawks-Bills game entered the twilight zone at the end of the first half. Three seconds stretched into several minutes of embarrassing confusion in a sequence that cost the Bills three crucial points in a 31-25 Seahawks victory.

After Buffalo QB Tyrod Taylor completed a pass up the middle to WR Robert Woods at the Seattle 35-yard line, the Bills took their final timeout of the half with three seconds left. Trailing 28-17, coach Rex Ryan sent out the field goal unit, hoping to have a one-score game on his hands when his team received the second half kickoff.

Things went awry in bizarre fashion, in a way that left many blowing the dust off rule books.

On the initial field goal attempt, Seahawks CB Richard Sherman rushed off the edge before the ball was snapped, surging toward Bills kicker Dan Carpenter. The ball was snapped anyway as whistles blew for the offsides penalty, and Sherman dove to block the kick. His momentum carried him into the plant leg of Carpenter, who writhed on the ground in pain after his knee appeared to hyper-extend.

Referee Walt Anderson turned on his microphone to address the crowd:

“Prior to the snap, offside, defense, No.  25, unabated to the kicker, it’s a five-yard penalty.”

Then came the whammy:

“Trainers came out to attend to No. 2 (Carpenter). This will be a fourth charged timeout from Buffalo. No. 2 will have to leave the game” for at least one play.

Cheers came from the crowd as a flock of Seahawks jogged toward the tunnel. Anderson spoke with the panic of a high school teacher whose students bolted before class was dismissed:

Inside of two minutes, teams are allowed a free fourth timeout if an injured player needs medical attention. A fifth timeout for the same reason draws a delay of game penalty and 10-second runoff, which inspired the Seahawks and Bills to leave for intermission.

Seattle wasn’t the only group to misinterpret the rules. The NFL admitted that Anderson’s assessment of a mere offside was insufficient for Sherman’s hit on Carpenter.

“We looked at it and it is a foul,” Blandino said. “It is no different than a defender coming offside and hitting a quarterback after the whistle blew, so it should have been unnecessary roughness.

“(Anderson) in looking at it was coming in to kill to play and didn’t think the contact was enough. Obviously when you look at the tape, that is not the case.”

Anderson explained his rationale after the game: The clock never started, since the play was blown dead once Sherman charged into the backfield.

After players from both sides returned, the Bills were left with a problem:  Three seconds to run a play on first and five, with Carpenter forced to sit for a play.

Bills head coach Rex Ryan took a sword to the Gordian knot, electing to send Taylor out to spike the ball and burn a play, and two seconds, so Carpenter could return.

Taylor’s spike sparked another bizarre turn. The use of a regular-play football for the spike meant that it had to be swapped out for a kicking ball. As a referee stood over the ball to do the swap and allow extra time for defensive substitutions, the play clock errantly dwindled as officials conversed.

By the time the Bills were allowed to get over the ball, four seconds remained on the play clock.

They didn’t get the snap away in time and drew a flag for delay of game as the ball moved through the uprights. The Bills were moved back to the 35-yard line for a 52-yard field goal attempt instead of 47-yard attempt, or the 35-yarder they would have had if Sherman were assessed a roughness penalty.

Anderson admitted this was a mistake.

“If there was that little time left, then that’s probably a mistake on my part in terms of not pumping the play clock up,” he said. “I was not aware that it was that far into the play clock.”

The 20-yard difference was everything. Carpenter’s kick missed wide right. The Bills went into halftime trailing by eight points.

“Ridiculous . . . absolutely ridiculous,” he said, red in the face. “I think from an officiating stand point I think they can do a little better than that.

“It doesn’t matter (about the explanation), it was wrong.”

The missing three points affected the game’s final moments. Trailing by six instead of three, the Bills boomed down the field to a first and goal at the Seattle 9. But the Seahawks sacked him twice and his fourth down pass fell incomplete, allowing Seattle to run out the clock.

Ryan would have loved to have needed only three to tie and force overtime.

“Of course,” Ryan said. “We had all the momentum, we were outplaying them. That was clear.”

Blandino said the league will “absolutely” address the officiating errors. But there’s no erasing the black eyes on the Monday showcase game for a national audience searching for amusement amid the political angst.