Seahawks defense allowed Bills to convert 12 of 17 third downs, including a third-and-21 in the final two minutes. They still won, but it’s the biggest worry heading into the New England game Sunday. 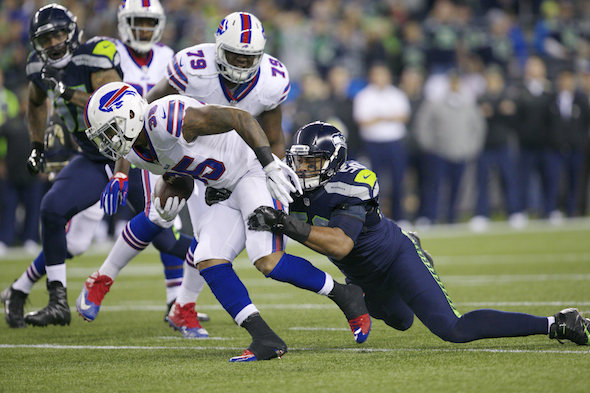 Dramatic as was the Seahawks defense’s first-and-goal stop on the Bills’ final possession Monday, coach Pete Carroll couldn’t help but be dismayed at having to need it after a run of quality defensive efforts.

“We got to do better” on third downs, Carroll said Tuesday on his weekly ESPN 710 radio show. “We’ve let (New Orleans and Buffalo) get off to such good starts against us. Really disappointed in the last two weeks.

“We were kicking butt the last six weeks, and all of a sudden the last two weeks, we lose a little bit of connection.”

They nearly lost the game, prevailing 31-25 only because the their red zone defense remains uncompromised. From the 10-yard line with 1:10 to play, the Bills had a three- yard run, followed by consecutive sacks from LB K.J. Wright and DE Cliff Avril, and a fourth-down pass that had little chance and fell incomplete.

But prior to the series, the Seahawks appeared to have the Bills dead at their own 40 with a third-and-21. QB Tyrod Taylor, who made a huge impression on the Seahawks as well as the national TV audience, completed a 22-yard pass to WR Robert Woods. Adding 15 yards due to a roughing the passer call on LB Bobby Wagner, the Bills had first down on the Seattle 23 and 1:17 left to slip in the emotional dagger into a record crowd of 69,084.

That 22-yard play was the 12th third-down conversion in 16 tries by the Bills, a remarkable feat against Seattle’s defense. Buffalo offered a bewildering array of offensive sets, including old-school option pitches and a full-house backfield, that seemed to confuse a defense missing to injuries two key leaders, DE Michael Bennett and SS Kam Chancellor.

Then there was Taylor, who was sacked five times but escaped at least twice as many sacks with his remarkable quickness and agility — he had 43 yards in eight carries — and the Seahawks’ uncharacteristic inability to wrap up.

“We tackled poorly today,” Avril said. “But they have some elusive guys that can make some plays.”

Avril also admitted he lost his cool after being held without penalty by the Bills’ offensive line. He confronted officials at least twice, but avoided penalties.

“I let them get the best of me today,” he said. “That’s not normally my game, but sometimes you get punched in the face and you get mad. I think I need to do a better job communicating with the refs instead of just freaking out.”

A week after the Saints had 375 total yards against Seattle, the Bills had 425 despite the hostile crowd. Some would argue that the five-quarter draw with Arizona, followed by two games with top-shelf offenses, has worn down the Seahawks. Carroll thinks the opposite.

“The thing we were talking about this morning was our defense has been through so much challenge in the last month, that they’re getting stronger,” he said Monday. “It’s not like they’re getting worn. They’re getting in shape for the run.

“The experience we’ve gained, the confidence it takes to hold down there when it’s crazy, we’re getting better.”

That’s a debatable point, given that the Saints held the ball for 36 minutes and the Bills for 40, atop of which was the Cardinals-game differential of 46 minutes to 29.

And it is likely to stay that way, given that the Seahawks have temporarily converted to a pass-heavy offense that lacks the clock-eating quality of a dominant run game. The Seahawks had only 42 plays Monday (the Bills had 82), 12 of which were runs.

“The running game is not where we want it to be at all,” he said. “Maybe it doesn’t come around. I don’t know. I’m not leaving the thought of trying to balance this thing out. We do know we don’t have to run the football to win football games. But we want to.

“We don’t need to run it right now. Let’s keep throwing. We didn’t make much progress in this game toward the run.”

Unfortunately for them, they must fly this one-winged plane to New England Sunday to face a 7-1 Patriots team coming off a bye week while the Seahawks have a short week of recovery.

Naturally, Carroll was nothing but enthusiastic about the timing.

“New England will be jacked up for us,” he said. “They’ve been off for a week, cranked up. If we get a chance to make the playoffs and play on the road — the Super Bowl is a road game — you gotta get ready to do that. They’re healthy, in great shape and rested. Let’s go get a shot at these guys and see how we can do.”

Brave words for a coach whose starting running back, Christine Michael, piled up one net yard of rushing of rushing Monday, and a defense that gave up 22 yards on a third and 21. But since the NFL won’t allow team forfeits, the Seahawks may as well show up with a pleasant attitude.

Asked about what he said to CB Richard Sherman after he ran near him on the sidelines following an interception, Bills coach Rex Ryan said after the game, “I thought he roughed our kicker. It was a ridiculous play. Then he’s over on the sideline basically taunting us, so I had some words. I think I said, ‘You’re too good of a player to act like an ass.'” Asked about the name-calling, Carroll said Monday, “I just wish he’d coach his own team. Just coach your own guys.” . . . Carroll said Chancellor (groin)  is “ready to go” this week, and there’s a chance for the returns of LT Bradley Sowell and TE Luke Willson. RB Thomas Rawls (broken fibula) will return to practice but won’t play in Foxborough.