The Seahawks have not recorded many wins in their 41-year history under the bizarre circumstances that prevailed at CenturyLink Field Monday night against Buffalo. 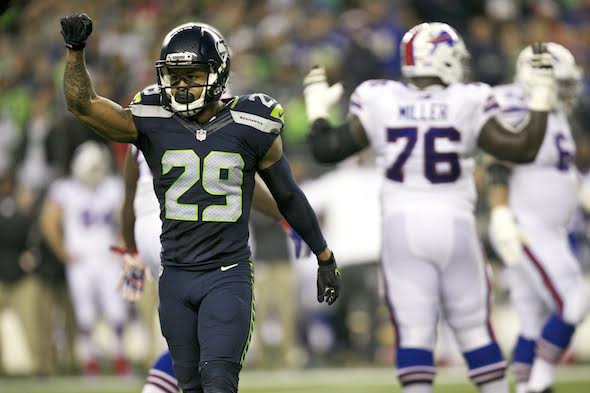 The Nov. 3, 1996 joust between the Seahawks and Oilers in the lightly lamented Kingdome was largely the kind of yawner that could have been expected from two teams going nowhere (Seattle finished 7-9, Houston 8-8). Mostly, it devolved into an exchange of Todd Peterson and Al Del Greco field goals, each hitting three through three quarters, which ended 9-9.

At 8:24 of the fourth quarter, however, the proceedings perked up. Houston QB Steve McNair startled the sparse crowd of 36,320 by whipping a 65-yard touchdown pass to Chris Sanders, who juked out Seattle cornerback Selwyn Jones on the play. That gave the Oilers a 16-9 lead. In retaliation, John Friesz tossed a 14-yard TD to Joey Galloway to tie the game 16-16 with 4:42 remaining.

Little else of consequence happened until 37 seconds remained in regulation when Del Greco lined up for a 37-yard field goal that would have given Houston a 19-16 victory.

“At that point,” Friesz said later, “it felt real hopeless.”

But then, as the ball was snapped, DE Sam Adams helped collapse the Houston line. A hole opened and Michael McCrary bulled through and blocked Del Greco’s kick — not with his hands, but his chest. McCrary snatched the carom off the plastic Kingdome rug and quickly flipped it to a trailing Robert Blackmon, who whizzed 61 yards for the game-winning touchdown as time expired.

“That had to be one of the craziest plays in Seahawks history,” said head coach Dennis Erickson, who was right on one account: It was the longest such play in team annals. But crazier still, it enabled the Seahawks to “miraculously” (Erickson’s word) win a game in which they finished with a mere 32 yards rushing.

In 41 Seahawks seasons, that 23-16 win over the Oilers is one of three that Seattle won while rushing for fewer than 40 yards. The second occurred Oct. 28, 2008, when backup QB Seneca Wallace and the Seahawks beat San Francisco 34-13 with 39 rushing yards.

The third? Monday night at CenturyLink Field, when the Seahawks produced a pathetic 33 rushing yards in 12 attempts, including a combined eight carries for 10 yards by RBs C.J. Prosise and Christine Michael.

In other words, the Seattle-Houston game 20 years ago is the only one in which the Seahawks had fewer rushing yards than Sunday night and won.

To illustrate how tough it is to win with such anemic ground production, consider that the Seahawks have won only seven times since 1976 (their first year) when they rushed for fewer than 50 yards. Those games:

We can expand on this. In addition to rushing for 33 yards Monday night (Tyler Lockett, with 13 yards on an end around, became the first Seattle WR to lead the team in rushing since Percy Harvin had 45 yards at San Diego Sept. 14, 2014), the Seahawks went 2-for-7 on third-down conversions.

Counting all NFL teams over the past 25 years, these are the only ones that rushed for 33 or fewer yards while converting two or fewer third-down chances, and won:

Not only did the Seahawks deliver another inept rushing performance – 2.8 yards per carry – they failed to contain Bills QB Tyrod Taylor, who “Russell Wilsoned” them so effectively (289 passing yards, 43 rushing) that Buffalo held the ball for 40:17 to Seattle’s 19:43. That came a week after the New Orleans Saints scored on their final six possessions.

“It was up and down,” CB Richard Sherman said when asked to describe Seattle’s defensive performance.

Linebacker Bobby Wagner, though, had the more pertinent response when asked the same question.

“I don’t know what the percentage was, but they (the Bills) were definitely successful on third down. We have to do a better job of getting off the field.”

The Bills converted 12 of their 17 third-down opportunities, which led to a brutal disparity in total plays run: 82 for Buffalo, 42 for Seattle.

That begs the obvious question: Have the Seahawks won a game in which they allowed an opponent to convert 12 third downs?

Yes, on Monday night. That’s the only time. In fact, the Seahawks have won only five times in their history when their opponent converted as many as 10 third downs:

So the Seahawks head to New England Sunday sans any semblance of a running game and with a defense that hasn’t been able to get off the field for two consecutive weeks.

The Seahawks haven’t won at New England since Sept. 19, 1993 and face a 7-1 Patriots outfit trying to become the first club since the 1960 Cleveland Browns to have no interceptions in the first nine games of a season.

Idle Sunday, the Patriots are 12-4 coming off a bye under coach Bill Belichick and haven’t lost a post-bye game at home since 2002. The Seahawks have a lot of work to do in this short week.