Huskies jump to No. 4 in playoff rankings

The Washington Huskies (9-0 overall, 6-0 Pac-12), moved from No. 5 to No. 4 in the latest College Football Playoff rankings. UW hosts USC Saturday. 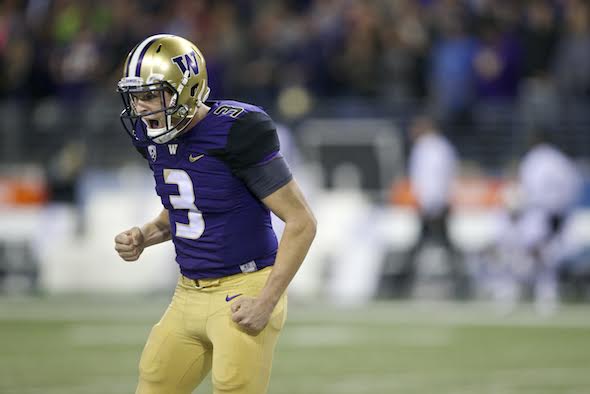 Washington’s 66-27 romp over California Saturday, coupled with Texas A&M’s 35-28 loss to three-win Mississippi State, vaulted the Huskies from No. 5 to No. 4 in the College Football Playoff rankings released Tuesday. The top four teams in the determining poll Dec. 4  advance to the national semifinals Dec. 31 with the winners meeting for the national championship Jan. 9.

Last week, when the College Football Playoff rankings were published for the first time this season, Huskies fans fell into a dither over one-loss Texas A&M’s slot at No. 4.

The question this week was whether Ohio State, a 62-3 winner over No. 10 Nebraska, the largest margin of victory involving two teams ranked in the top 10 in the AP poll, would enable the Buckeyes to leapfrog the Huskies.

It didn’t happen in either the AP or coaches polls released Sunday, and it didn’t happen Tuesday. The College Football Playoffs ranking committee determined, apparently, that Washington’s perfect record trumped Ohio State’s clear edge in strength of schedule, plus its three wins over top 20 AP teams. The Buckeyes play the nation’s 42nd-toughest slate, Washington the 67th.

“The selection committee continues to be impressed with Washington each and every week,” said Kirby Hocutt, chairman of the committee that issues the rankings. “The strength of schedule is one component. Last week, we said that while Texas A&M had one loss, it was to No. 1 Alabama. This week, we’re looking at the fact that (one loss) Ohio State lost to Penn State. Washington has earned the No. 4 spot this week.”