Forward Jordan Morris of Mercer Island, who signed with Seattle as a Homegrown Player in January, is the first player in franchise history named MLS Rookie of the Year. 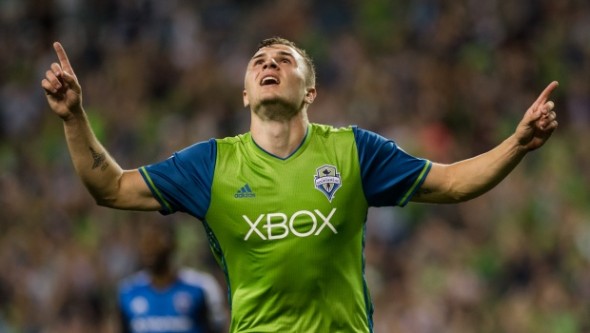 Jordan Morris is the first Sounder to win MLS Rookie of the Year award. / Sounders FC.com

Major League Soccer Thursday named Sounders forward Jordan Morris the 2016 Rookie of the Year. Morris is the first Seattle player to earn the honor, recording a team-leading 12 goals, also a league record for an American-born rookie. Six were game winners.

Morris, a Mercer Islander who starred at Stanford, signed as a Homegrown Player in January, received 44.95 percent of the averaged vote. Players, media and clubs participated in the balloting.

Keegan Rosenberry of the Philadelphia Union finished second with an average percentage of 30.60 while Jack Harrison of New York City FC was third with 15.12 percent.

“It’s a huge honor and it was one of my goals going into the year, but there were some other amazing rookies this year and they had some awesome seasons,” said Morris. “Just to be a finalist for the award with two other great, great players was cool. It is obviously a huge honor.”

“We are proud of Jordan,” said Sounders GM Garth Lagerwey in a statement. “We think he has been as impactful in his first season as any rookie in the history of the league. We also believe that because of his work ethic, intelligence and humility he will only get better. Jordan is an exemplar of the best qualities of his hometown Seattle. He is an unparalleled teammate and role model for our community.”

“Jordan is a big reason that our club has been successful this year,” said coach Brian Schmetzer. “He has dealt with huge expectations and pressure from the media, and handled himself like a veteran pro.”

Morris, 22, netted his first goal in a 2-1 win over the Philadelphia Union April 16. He recorded his first multi-goal performance against the LA Galaxy September 25 in a 4-2 Seattle road win.

Outside of league play, Morris has earned 12 caps for the U.S. National Team and scored in a 2-0 win over Mexico in 2015. He was recently selected for a pair of 2018 FIFA World Cup qualifiers against Mexico and Costa Rica.

Another Sounder remains up for an award. Midfielder Nicolás Lodeiro is one of three finalists for Newcomer of the Year after recording four goals and eight assists since signing July 27.

The Sounders host the first leg of the Western Conference championship against Colorado Nov. 22, following the FIFA international break.