The Pac-12’s two most efficient QBs, sophomore Jake Browning and redshirt frosh Sam Darnold, are the marquee storylines for USC’s first visit to Husky Stadium since 2009. 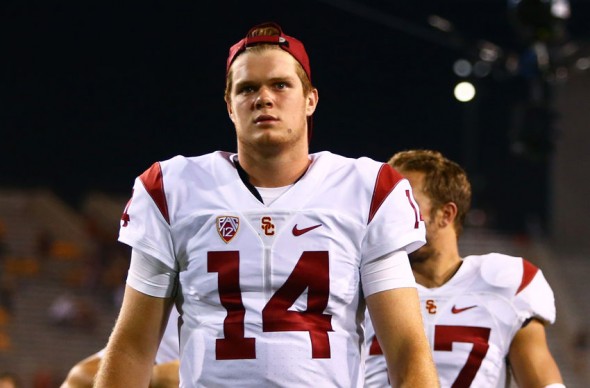 If two hype-trains depart from Montlake and Los Angeles at the same time, traveling the same speed, who gets derailed when and where?

The collision between the Pac-12 Conference’s two best quarterbacks is a major story ine Saturday (4:30 p.m., FOX) when the University of Washington hosts the USC Trojans at sold-out Husky Stadium, an event boosted by the hyper-hype of ESPN’s “College Game Day” show beginning at 6 a.m. at Red Square on upper campus.

Washington, 9-0, No. 4 in the College Football Playoff rankings, while 6-3 USC, a perennial powerhouse in Pac-12 football, stumbled early but has won five in a row to get to No. 20 in the rankings. This is USC’s first visit to Husky Stadium since 2009, Pete Carroll’s last year as Trojans coach (the 2012 trip was to the Clink while the UW stadium was being renovated).

The Trojans have become dangerous largely thanks to redshirt freshman QB Sam Darnold, whose underdog triumph has made him the autumn conversation starter in Los Angeles sports, thanks to the NFL Rams’ 3-5 start in their return to LA and the flop of QB Josh Rosen at UCLA.

Darnold began the year second on the depth chart. In the top spot was Sammamish native and former Skyline High School star Max Browne, who snubbed an offer from then-Washington head coach Steve Sarkisian, saying that it was every young quarterback’s dream on the West Coast to play for USC.

After USC started with a 52-6 bludgeoning from Alabama, however, the spotlight on Browne grew hot. After USC dropped its Pac-12 opener to Stanford, 27-10, Browne, a junior getting his first chance after two years as a backup, was benched by first-year coach Clay Helton.

Returning to Seattle, where the Trojans haven’t played since 2012, as a benchwarmer is a hurtful development for Brown.

“It’s a subtle reminder that I’m not where I want to be necessarily,” he told the Los Angeles Daily News. “The Pacific Northwest will always be home, but selfishly Saturday is gonna be a little tough. I’d be lying if I said otherwise.”

He won’t play unless it’s mop-up time because Darnold has shone. He is second in the conference in passer efficiency, with a rating of 168.1 (146-of-215, 20 TD, 5 INT), behind Washington QB and Heisman Trophy candidate Jake Browning’s 202.8.

In Darnold’s first start, USC lost a tight game to then-No. 24 Utah, 31-27. Darnold was sharp — 18-of-26 for 253 yards, the most accurate debut of any of USC’s most recent six regular starting quarterbacks, a list that includes Carson Palmer, Matt Leinart and Mark Sanchez.

Since then, Darnold has led the Trojans past Arizona State, Colorado, Arizona, Cal and Oregon. He has thrown for 1,738 yards in six games. Against Arizona, Darnold had five touchdown passes.

Darnold’s ability to unfold coverages has turned heads, especially in a media hub like Los Angeles. Darnold, however, rivals Browning in another category: Shrugging indifference to media hype.

“I don’t play attention to that kind of stuff,” Darnold told the LA Times when asked if he was now the hottest quarterback in the city after UCLA’s Josh Rosen faltered. “I guess it’s good media attention.”

There’s been no shortage of attention for the 6-foot-4, 225-pound Capistrano Beach, CA native.

Some have weighed in on where Darnold acquired his skills claiming his excellent field vision developed on the basketball court. Others say it was during his time as a backup, winning over teammates on the practice field.

For Washington head coach Chris Petersen, it doesn’t really matter, only that his defense will have to deal with the most well-rounded quarterback they’ve faced so far, despite his youth.

“(Darnold is) a really good athlete,” Petersen said. “He can move, he can run. Really strong arm, and he’s an accurate thrower. He’s not really a freshman, when you look at how many games he’s played and the things he’s seen.”

The Trojans, nine-point underdogs, are seen by many as the team with the best chance to beat the Huskies during the regular season, largely thanks to Darnold. Give him 6-foot-2, 220-pound WR JuJu Smith-Schuster as a target, and even a Washington defense that could give prison guards pointers may take pause.

Washington co-defensive coordinator Jimmy Lake certainly seemed to do so.

“The first thing we have to do is stop the run, because (the O-linemen) are maulers,” Lake said. “They have a talented stable of running backs. When they decide to pass . . . they are mammoths to get around. So whoever’s blitzing, whoever’s rushing, we have a huge challenge in front of us.”

A competent systems guy with tons of talent around him, it’s no wonder that the hype is following Darnold the same way it follows Browning. Darnold will have to adjust to the noise and atmosphere of a sold-out roadhouse, but if he turns in a Browning-esque performance, the Trojans will have a shot.

“USC is right back to (being) USC  — just watch the tape,” Petersen said. “This is, across the board, really good. Tons of talent like you’d expect USC to have, and now they are playing in rhythm in all three phases. You see why they’re in this win streak.

The Huskies’ final regular-season home game against Arizona State Nov. 19 is booked for 4:30 p.m. (FOX)  . . .  A year ago, Washington beat then-No. 17 USC 17-12 on a Thursday night in the Coliseum, former Huskies coach Steve Sarkisian’s last game at USC before he was fired for alcohol-related issues . . . Jeff Tedford, hired by Petersen as an offensive consultant this season, has been hired to coach Fresno State. The Bulldogs, 1-9 and 0-6 in the Mountain West Conference, fired Tim DeRuyter Oct. 23. Tedford is expected to work the USC game.  Tedford, a former Fresno quarterback, was 82-57 in 11 seasons at Cal and was fired after going 3-9 in 2012. Fresno State plays Washington next fall . . . Junior Connor O’Brien will again start for at linebacker for Joe Mathis, out for the season after toe surgery. In six games with Mathis, the Huskies’ 24 sacks were in the top 10 nationally. In three games without Mathis, the Huskies has three sacks.