The Seahawks, who botched their final play with 20 seconds remaining in Super Bowl XLIX, haven’t made a mistake from the one-yard line since then. 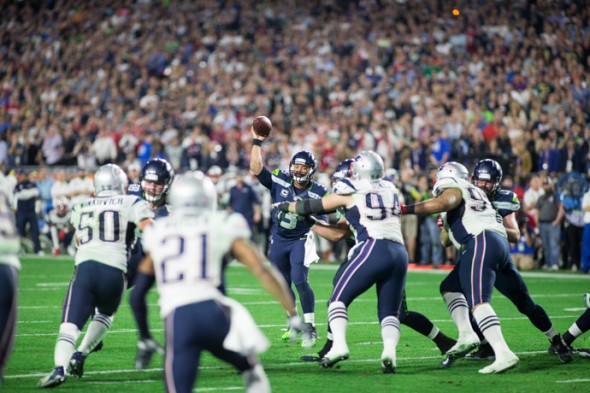 No one who saw it will ever forget the determining play of Super Bowl XLIX: 20 seconds to play, Seattle at the New England one-yard line, second and goal. It seemed the perfect setup for RB Marshawn Lynch, the NFL’s top battering ram who had 102 yards on 24 carries. But either head coach Pete Carroll or offensive coordinator Darrell Bevell, to their everlasting mortification, opted instead for QB Russell Wilson to throw the ball.

The Seahawks never have lived down that play, nor will they, given the moment, the stage and the stakes. Wilson tossed the ball over the middle, thinking he had WR Ricardo Lockette for an easy touchdown. But WR Jermaine Kearse couldn’t make the block he was supposed to make, boxed out as he was by New England CB Brandon Browner, a former Legion of Boom member.

Knowing Wilson’s intent, rookie CB Malcolm Butler, a spare part out of West Alabama, jumped ahead of Lockette and picked off the pass, sealing a 28-24 New England win that denied Seattle a chance to win back-to-back Super Bowls.

Carroll and Wilson tried to shoulder the blame.

“I thought it was going to be a touchdown,” Wilson said. “But I put the blame on me. I’m the one who threw it. But give the guy (Butler) credit. He made a great play.”

A season and a half has elapsed since the play that won’t go away. Bevell, who initially blamed Lockette, saying, “He could have done a better job of staying strong on the ball,” re-addressed the epic mishap this week ahead of Sunday’s Seahawks-Patriots rematch at Gillette Stadium.

“Of course it’s a terrible memory,” he said. “Every time it comes up, it just sticks in your gut. It’s a new season now. That was two years ago. It’s something that’s always there, and it’s something I’ve grown from, something that I learned from. But that isn’t going away. It’s always going to be there.”

The Seahawks have played 26 games (regular season and playoffs) since losing to the Patriots at Arizona’s University of Phoenix Stadium. In those contests, they have run 11 plays from the opponent one-yard line without a turnover. The 11:

Only one of the 11 plays was a pass, ironically from Wilson to Lockette Oct. 22, 2015 in the first quarter against San Francisco. That didn’t work either, but at least it wasn’t an interception. The other 10 plays were runs, six resulting in touchdowns, including a pair by Lynch.

Carroll and Bevell, regardless of which one called for a pass instead of a run, earned a painful lesson.

New England is a 7½-point pick to defeat the Seahawks Sunday night (Seattle’s largest dismissal by oddsmakers since 2012) in large part because the Patriots play superbly at home (and abetted by Seattle’s inability to get off the field defensively). Since 2012, they have lost only five times at Gillette Stadium (no lossesin the 2013 and 2014 seasons) when Tom Brady has started at quarterback, four in the regular season, once in the 2012 AFC Championship game.