Seahawks’ Michael could give way to Prosise

Seahawks leading rusher Christine Michael suddenly developed a hamstring problem, which may mean rookie C.J. Prosise will get a chance to revive the moribund running game. 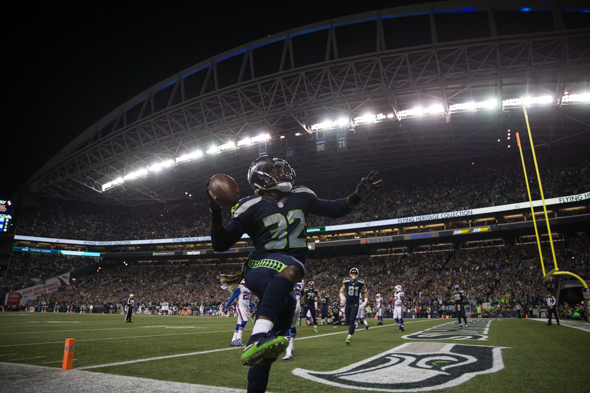 After his one good play Monday, a three-yard touchdown run, RB Christine Michael celebrated by throwing the football into the stands. / Drew McKenzie, Sportspress Northwest

RB Christine Michael showed up on the injury report Friday as questionable because of a hamstring injury, leading to speculation that rookie C.J. Prosise, whom coach Pete Carroll has been praising heavily, might start at 5:30 p.m. Sunday when the Seahawks (5-2-1) are in New England to play the NFL’s best team, the 7-1 Patriots.

Carroll did not bring up Michael’s condition Friday in his final media chat before the trip. Michael hadn’t shown up on the injury list prior to Friday, which indicates something happened at practice.

Michael gained a net of one yard in five carries Monday in the 31-25 win over the Bills, scoring a touchdown on a three-yard run in the second quarter. He didn’t play in the fourth quarter.

The Seahawks’ dreary running game managed 33 yards in 12 attempts. WR Tyler Lockett was the leading rusher on a single 13-yard fly sweep. For the season, Michael leads the Seahawks with 447 yards in 112 carries.

Speaking of Prosise, the third-round draft pick from Notre Dame who has nine carries for 30 yards and eight receptions for 116 yards in his first season, Carroll went to some lengths to describe his virtues.

“He fits really well,” he said. “He’s a very flexible athlete, good hamstring flexibility. He’s a very versatile athlete that we’re just trying to grow with, and figure out where he fits, kind of find a role that really suits him. There’s not many restrictions.

“He’s big (6-1, 220 pounds), he’s fast, he can catch and he can run. He blocks well when he’s had his chances, and he’s been aggressive with his pass protection. It’s just all positives. He looks the part. We’re really excited about that and just hope he can contribute in a bigger way as we move through the schedule.”

RB Thomas Rawls, the heir apparent to Marshawn Lynch, had a good week of practice after his broken fibula healed. But he won’t play Sunday.

“There’s a temptation, yeah,” Carroll said, answering a question. “He looked really fast and confident making his breaks and moves. It was a really good week for Thomas coming back. You couldn’t see anything that was bothering him at all. It was really positive.”

Carroll is desperate to get the running game going to take some pressure off QB Russell Wilson and the throw-first offense.

“We continue to work at it — you’ll see what happens this week,” he said. “It’s a really good football team we’re playing. We have to adapt well and adjust what we’re doing as they show us their game plan. We have a plan to do that. I’m hoping that we’ll balance things out really well this weekend.”

The Pats’ defense hasn’t been overwhelming. The rush defense gives up 4.1 yards per carry, tied for 14th, and is 13th in total defense at 354.1 ypg, so the Seahawks may think they will get some traction.

LT Bradley Sowell is still “wait and see” on recovery from a left knee sprain, which may mean rookie George Fant will go again. But Carroll indicated TE Luke Willson (ankle) will see his first action in three games.

On defense, SS Kam Chancellor is back after missing three games with a groin injury: “We miss the guy — there’s only one guy like that, so it’s great to have him back.” But DE Michael Bennett (knee) will miss another game, as well as a rendezvous with his brother, TE Martellus Bennett, who joined the Pats in the off-season. Martellus is listed on the Pats injury report as questionable with  a sore ankle.

The game marks Carroll’s first return to the area since he left following his 1999 firing. Succeeding the legendary Bill Parcells, he had a 27-21 record and two playoff appearances in three season but was fired by owner Robert Kraft, who said it was one of his toughest football decisions.

“A lot of things were going on that made it difficult for him to stay, some of which were out of his control,” Kraft once said. “And it began with following a legend.”

Carroll long ago was over it, and at the Super Bowl in Phoenix seemed to greet Kraft warmly.

“It was an awesome place to coach and work and represent and all that,” he said Friday.  “I’ve never seen the stadium, never been there. I’m looking forward to seeing the whole new set up.”