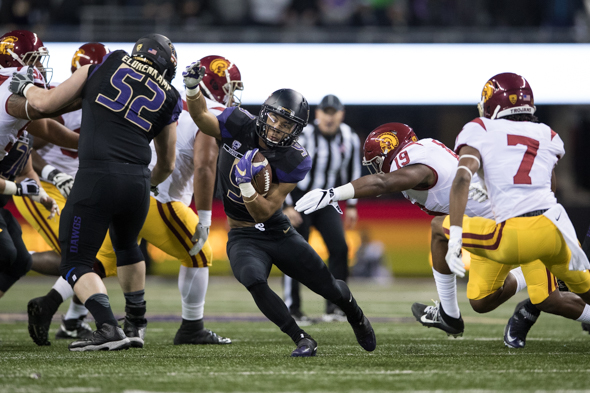 Washington’s opportunity to earn a spot in the national college football playoffs, as well as QB Jake Browning’s Heisman Trophy candidacy, were sent reeling Saturday night when 20th-ranked USC, a seven-point underdog, upset the No. 4 Huskies 26-13, handing UW one of the most disappointing defeats in school history (box).

Washington (9-1 overall, 6-1 Pac-12) had a prime opportunity to advance a notch in the national rankings with No. 3 Clemson’s 43-42 loss to Pittsburgh and No. 2 Michigan’s 14-13 loss to Iowa. But the Huskies couldn’t generate much of anything offensively after averaging 48.3 points per game through their first nine contests.

The Trojans not only made life miserable for Browning, who had his most ineffective outing of the season, but their quarterback, freshman Sam Darnold, shredded the UW defense, especially with a series of killer throws to another freshman, TE Daniel Imatorbhebhe.

Already missing their leading sackmeister, DE Joe Mathis, the Huskies also lost stud LB Azeem Victor in the first half with an unspecified leg injury. But the Huskies were outplayed in any event on both sides of the ball, ending their dreams of a perfect season.

With USC holding a 10-6 lead heading into the final two minutes of the first half, Darnold connected with Imatorbhebhe on two big throws, for 21 and 22 yards, that set up a four-yard TD run by RB Ronald Jones for a 17-6 halftime lead.

The Trojans never allowed Browning to get going, forcing him continually into poor throws and picking him off twice. Browning completed 17 of 36 for 259 yards. His only TD, t70-yard bomb to Ross in the third quarter, occurred largely because DB Adoree’ Jackson, couldn’t recover from a Ross fake and fell down at the line of scrimmage, allowing Ross to get free.

Browning’s TD was his 35th, extending his UW single-season record. Ross’s TD catch was his 15th, three shy of the school mark of 18 by Mario Bailey in 1991. Ross had eight catches for 154 yards, which was pretty much the extent of Washington’s offense.

Washington failed to produce much of a running game. RB Myles Gaskin, who entered averaging 105.8 yards per game, had 51 (no other Husky had more than six yards), which was largely negated by Browning’s -36 on three sacks. The Huskies finished with a net of 17 rushing yards to USC’s 133, and were stomped in total yards, 400 to 276.

The Huskies entered the game averaging 231 rushing yards, tops in the Pac-12 Conference.

Aside from Ross’s catch-and-run and   23-yarder by Ross on Washington’s first offensive play, the Huskies had only one other play longer than 20 yards — a 28-yard pass from Browning to WR Chico McClatcher in the fourth quarter.

The Huskies lost Victor in the second quarter, an injury that required an air cast and a cart to take UW’s leading tackler off the field. His absence played a big role in Darnold exploiting the middle of the field.

USC had a huge play from DT Jack Jones in the third quarter when he blocked Cameron Van Winkle’s 38-yard field goal attempt after Darnold was intercepted for a second time by Rapp. Van Winkle kicked two field goals, from 43 and 39 yards . . . The loss snapped Washington’s 12-game winning streak that dated to the middle of the 2015 season . . . The Trojans extended their all-time series lead to 52-29-4 . . . Washington had won three of its past five against USC, including 17-12 last year.

Washington plays its final home game of the 2016 season Saturday when it hosts Arizona State at 4:30 p.m. The Huskies close out the regular season Nov. 25 with the Apple Cup at Washington State (12:30 p.m.).