The howling, sold-out house at Montlake did not make a moment too big for USC’s freshman QB, Sam Darnold. The Huskies’ Jake Browning, on the other hand . . . 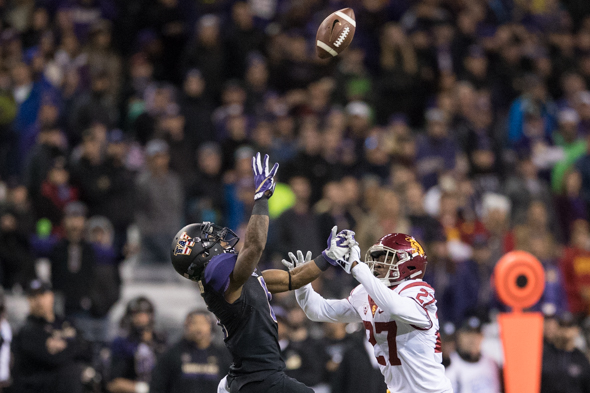 In falling from the pinnacle, there is some small consolation in Washington’s method of re-entry to ordinary college football life: It wasn’t an accident or a fluke. The Huskies  were beaten by a better team.

Two other teams that also are no longer undefeated — No. 2-ranked Clemson lost to Pitt and No. 3 Michigan lost to Iowa in a mass shakeup of the College Football Playoff rankings Saturday — can’t really say that.

Then again, after the 26-13 loss to USC, there was no worthy solace available when a record-breaking season snaps an axle.

“I didn’t play well tonight — I need to get better,” said QB Jake Browning, in a terse monotone that barely left spaces between words. Indeed, he had his worst game of the season. But even a good game by the suddenly former Heisman Trophy candidate would have only narrowed the gap. After a 3-3 first quarter, USC steadily asserted its dominance that recalled what UW coach Chris Petersen said earlier in the week.

The West Coast’s most successful program is back to brawny linemen, fleet receivers and a square-jawed quarterback strong of arm and stout of heart. Sam Dornald can run too.

“He’s fast,” Petersen said, sounding surprised. “He took off a couple times and converted some things. When he’s standing back there, those receivers are going to get open. He played with some pretty good poise tonight.”

Dornald’s poise may have been the most remarkable part of the evening. A crowd of 72,364, a record for remodeled Husky Stadium, howled and raged for the national TV cameras during the marquee match of the week. But the freshman, starting his sixth career game, treated the purple yammerings as if it were music most melodious.

“When you’re in a loud atmosphere like that, when it’s rocking all the time,” he said, “that’s when you really have to stay calm and show your team we can win.”

Didn’t matter what 9-0 Washington had done, or 6-3 USC hadn’t done. Dornald wasn’t the QB when USC lost three of its first four games, including a 52-6 thrashing by Alabama. But he’s been in charge for the winning streak that has reached six with the conquest of the Huskies, who were exposed as a good team merely with aspirations to be great.

That’s hardly a shame. But it is a knockdown from where the Huskies and their fans had imagined themselves to be when the day began as host for ESPN’s “College Game Day” hootenanny.

From the beginning, when the first three drives from the normally fast-starting Huskies ended with a punt, a field goal and an interception, things weren’t right. They were being beaten up front.

“They were defeating blocks,” Petersen said of the Trojans’ front seven. “That’s a big, physical defense. They did a good job playing soft enough on the back end to kind of keep things in front of them.

“You’re going to get so many chances to strike. You gotta capitalize.”

The Huskies capitalized only once, when WR John Ross faked out his defensive equal, CB Adoree’ Jackson, so outrageously that he fell down, leaving Ross wide open to complete a 70-yard pass for UW’s only touchdown.

That offered some hope for Washington, trailing 17-13 and then forcing USC into a 3-and-out. But after the next possession stalled at the USC 20 after nine plays, the Huskies attempted a field goal by Cameron Van Winkle that was blocked and returned to the 40-yard line by Jackson.

So Washington’s expectations went from six to three to zero, and the Trojans scored on the drive for a 24-13 lead. The game was hardly out of reach on the scoreboard, but on the field, Browning was out of sorts, harassed and incapable of a rally.

“I don’t think anybody panicked; we’ve been down before,” he said. “I thought our energy and mentality was good. We just got to execute better. That starts with me.

“We were down and tried to push the issue too much. Backfired.”

Sophomore Browning was a tepid 17 of 36 for 259 yards and was sacked three times. Darnold was 23 for 33 for 287 yards and two touchdowns, with a couple of picks. But he was sacked only once and his time to pass was plentiful. The fast USC receivers eventually shed their defenders, and were able to maintain control.

The Huskies are not completely out of the national title picture, because enough games remain for all contenders to enter the four-team field with one or two losses. But the Huskies, already burdened with a weak schedule, left a memory of scoring a single touchdown at home to a three-loss team. They are down the list.

Meanwhile, the Huskies have to muster the will to deal with Arizona State and Washington State.

“Here’s where we find out,” Browning said. “Are we front-runners who only play well when things are going well? Or do we bounce back stronger? What kind of team are we?”

Excellent questions, ones Huskies fans, delirious with the 9-0 start, are surprised to hear being asked.