In Washington’s second major injury loss for the defense, LB Azeem Victor underwent surgery for a fractured bone in his leg. It is unlikely that Victor will play again in 2016. 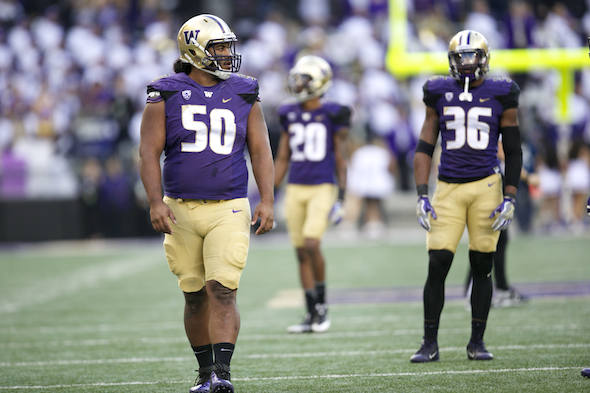 Junior LB Azeem Victor, the Huskies’ leading tackler, underwent surgery for a leg fracture Sunday. Victor was carted off the field in the second quarter of Washington’s 26-13 loss to USC Saturday and is likely done for the season, Washington football coach Chris Petersen said.

Petersen did his best to put a positive spin on Victor’s situation.

“He got surgery yesterday,” Petersen said. “It’s OK. It’s not going to be a real long term thing. It’s a bone. Those things will heal quickly.

“I don’t know what the timeline is, but it’s probably as good as it could be.”

Victor leads the Huskies with 68 tackles (46 solo) and one forced fumble. Before the injury, Victor was considered to be perhaps the most NFL-ready player on Washington’s lock-down defense.

Victor is the second major loss for the Huskies defense. Petersen announced Nov. 7 that Joe Mathis, Washington’s best pass rusher and sacks leader, would be out the remainder of the regular season with a toe injury, but did not rule out a possible return in a bowl game.

Though Petersen did not offer more details, it is unlikely that the Upland, CA native could return to game fitness in time for a bowl game in January.

No time to feel discouraged fellas. We knew what kind of fight we were preparing for. We’ve been determined. now let’s dominate! #Woof! pic.twitter.com/DoGSMV49vh