The Seahawks stopped New England inside the two five times in the final 40 seconds, but positioned themselves to win with rare feats from Russell Wilson and Doug Baldwin. 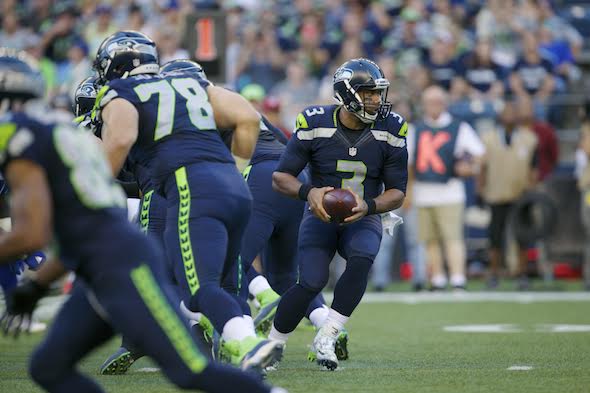 During his press gaggle Sunday night following New England’s 31-24 loss to the Seahawks at Gillette Stadium, coach Bill Belichick spent nearly two minutes rhapsodizing about Russell Wilson, who carved up his Patriots with a regular-season career-high 348 yards and three touchdowns without an interception – in a game Belichick’s club, nearly unbeatable at home over the past decade, had been favored to win by seven points.

Since there have been so many, it’s difficult to determine what, exactly, was Wilson’s best week. He’s produced a passer rating above 100 36 times in 83 career games (regular season and playoffs), so any of those contests are candidates.

He’s thrown three or more TDs without an interception a dozen times, including five TDs and no picks Nov. 29, 2015 against Pittsburgh. So there’s that. Wilson also had a 300-yard passing/100-yard rushing performance against the Rams two years ago. Since 1970, the only other quarterback to do that was Cam Newton (2015). And on and on.

If Wilson’s show against the Patriots doesn’t qualify as his best, it was close considering the rarity of his accomplishment and the long odds of achieving it.

Wilson still lacked some of old mobility when he took the field Sunday night. It had been a short practice week, and he was playing against the acknowledged best team in the NFL, coming off the benefit of a bye. He was also going against a quarterback in Tom Brady with a home record of 98-16 spread over 17 seasons, to say nothing of the fact that Brady is the only quarterback in history to have won 100 more games than he lost (176-51).

Confronted with that, Wilson became the first quarterback since Peyton Manning in 2005 to throw for more than 300 yards and deliver at least three touchdowns against the Patriots in Foxborough – and win. He also became only the third since the Boston Patriots entered the American Football League in 1960 with a 300+-yard, 3-TD game in Foxborough – and win.

Then there’s this: In the past 56 years, 18 quarterbacks — none of them named Montana, Marino, Favre or Elway — threw for at least 340 yards against the Patriots in Foxborough. Of the 18, only seven also threw for three or more TDs. This is the list:

Three takeaways from the list: Only Wilson and Kurt Warner  (2001) delivered a win, only Wilson and Jason Campbell did not throw an interception in the process, and Wilson produced the highest passer rating (124.6) of the bunch. Such was the rarity of Wilson’s feat Sunday night.

Wilson still has not lost a game by more than 10 points in 83 career starts (regular season and playoffs). In every one of those games, Wilson and the Seahawks either had a lead, or were within one score of the lead, in the fourth quarter. A team cannot be more competitive than that.

Certainly Seattle’s defense has had much to do with that, but consider: In Brady’s first 83 games, the Patriots lost 15 times by 10 or more points.

Wilson had five completions Sunday when he threw the ball at least 15 yards downfield, and wound up connecting with Doug Baldwin for three touchdowns, snapping Baldwin’s streak at five games without one.

Baldwin’s three TD catches tied a single-game record for the most against the Patriots on their home field. Since 1960, only three other receivers did what Baldwin did. The list, chronologically:

Doesn’t get a whole lot better than that, especially when you consider, over the same span, Brady and TE Rob Gronkowski have the NFL’s second-best, quarterback-receiver rating, 127.1.