Prosise learning to get his before he ‘gits got’

Rookie RB C.J. Prosise had his first start Sunday and was a big factor in helping upset the Patriots. He won over teammates at the end of a 38-yard pass play when he clobbered a tackler instead of going out of bounds. 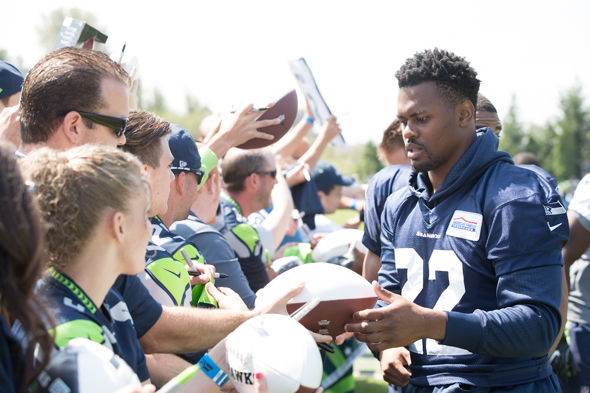 Time to get to know this fella C.J. Prosise. / Drew McKenzie, Sportspress Northwest

Amid the oohs and aahs that greeted the retro looks of QB Russell Wilson and SS Kam Chancellor — flashbacks to 2013 — in the Seahawks’ remarkable 31-24 triumph over the Patriots at Gillette Stadium Sunday, there were also smiles and nods over something new.

Rookie C.J. Prosise had his first start at running back. It went well. He had a Beast Mode moment.

“He catches one right up the sidelines,” said coach Pete Carroll Monday about a 38-yard catch and run, “and he’s got a chance to step out of bounds or whatever, and he laid wood to a (defender).

“Our guys really respect that. He was trying to make every inch he could.”

That’s all you really need to know about the third-round draft pick from Notre Dame, who’s been mostly a receiver in his high school and college football life. His dishing of pain to a would-be tackler bought him instant street cred in a locker room loaded with refugees from a Mad Max film casting call.

It’s also why former starter Christine Michael will be down to backup duty. On two or three occasions this season since he subbed for No. 1 starter Thomas Rawls, Michael stepped to the boundary instead of delivering a lick, which left rushing yards ungained. That’s a violation of team protocol.

Marshawn Lynch, whose lust for contact casts a long shadow over the Seahawks’ anemic run production this season, once explained his running style using the argot of the Oakland street:

Prosise “had a couple really good finishes —  he got smacked a couple times, too,” Carroll said. “He got surprised by a couple hits and bounced right back up. He showed a really good mentality about it. He had a ball playing. His attitude during the game and after the game in the locker room and on the way home — he really enjoyed the heck out of it.”

As with Chancellor and Wilson, he’s a native of Virginia — Petersburg, also the hometown of the late NBA great Moses Malone — who was a football and track star in high school before accepting a scholarship from Notre Dame, where he was recruited as a safety.

By his sophomore season, he was playing wide receiver, and also won the team’s special teams player of the year award. By his junior year, injuries forced coaches to move him to running back.

He left Notre Dame a year early and was rewarded by being taken with the 90th pick in the draft. GM John Schneider and his scouts gushed about the kid, and convinced Carroll to make him a priority hire after the retirement of Lynch.

“Ever since we had a chance, when we went into the draft, we wanted to get that guy,” Carroll said after the game Sunday. “For exactly what you saw tonight. We fell in love with him during the draft process and then we just haven’t had him. He just hasn’t been able to practice.”

A hamstring injury cost him time in the summer, and a broken bone in his wrist cost him four games in the regular season. He isn’t yet conditioned for an NFL season.

“He can’t be in great game shape, he just can’t be,” Carroll said. “He hasn’t played enough. He tapped out a couple times to catch his breath.

Prosise, 22, is not a power runner in the Lynch mold, at least not as much as Rawls. But he demonstrated in his debut the versatility the Seahawks sought for a third-down back. He led the Seahawks with seven catches for 87 yards and had 66 yards in 17 carries.

“What stands out the most is the variety of things that he did,” Carroll said. “He ran the ball inside, he ran the ball outside. He caught the ball well in the short passing game to make some first downs, and he caught the big ball down the sidelines.

“He got smacked on the catch and held on to it, just like the receiver that he has in his background. He’s been a good pass protector guy in the limited work that he’s had.”

As a team, the Seahawks rushed for 96 yards, modest by previous standards but a big uptick from recent weeks, thanks to — finally — a decent outing by the maligned line.

“We really were the most aggressive we’ve been, the most confident coming off the ball,” Carroll said. “It was the best outing that we’ve had. I think it just all fit together.”

Rawls is due back for another week of full practice, and likely will play Sunday at the Clink against the Eagles. He may be eased back in, meaning it’s likely Prosise will get a second start.

Laying wood is a recommended way in Seattle to keep a job.

Gronkowski was on a pass route in the third quarter when SS Kam Chancellor knocked the pass away and Thomas, at top speed, lowered his shoulder and drilled the big man in the chest. Gronkowski came out of the game for four plays, then returned. He said it was one of the hardest hits he has taken, but said it was clean and bore no malice.

“Sometimes in this game,” he said, “you get laid out.”

He had three catches for 56 yards, including a 26-yarder in the final two minutes that gave the Patriots a first down at the Seattle 2-yard line. After four plays got nowhere, Gronkowski was targeted in the end zone on fourth down by QB Tom Brady on a fade, but he and Chancellor pushed each other and fell down, as did the ball, incomplete.