Huskies fall to No. 6 in college playoff rankings

The committee that issues the College Football Playoff rankings put Washington at No. 6 this week, down two spots from last week, but one slot better than the AP and coaches polls. 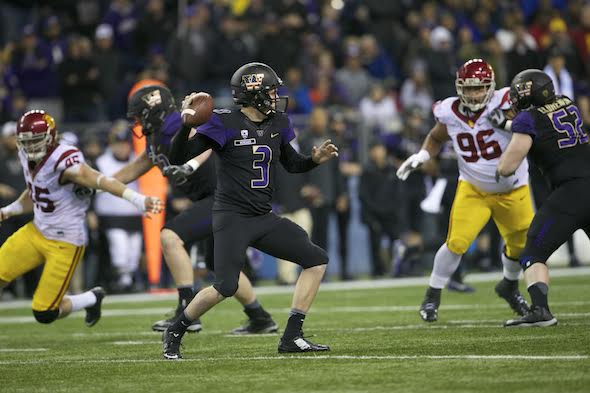 Jake Browning (3) and the Huskies are still in the playoff conversation. / Drew Sellers, Sportspress Northwest

The Washington Huskies (9-1 overall, 6-1 Pac-12), demoted to No. 7 in the Associated Press and coaches polls Sunday after losing to USC, caught a small break in the decisive College Football Rankings when they were placed at No. 6 Tuesday. The top four teams in the final CFP poll will be slotted in the semifinals Dec. 4, with the two winners meeting Jan. 9 in Tampa for the national championship.

Washington earned a No. 5 ranking in the first CFP rankings two weeks ago, moved up to No. 4 last week after a 66-27 win over California, but fell two spots Tuesday after dropping a 26-13 decision to the No. 20 Trojans Saturday night at Husky Stadium, its first loss of the season.

That defeat sent the Huskies tumbling to No. 7 in the Associated Press and coaches polls, but the committee that produces the CFP rankings disagreed, elevating Washington one spot to No. 6. The Huskies still have a shot to make the final four if they win out against Arizona State Saturday and Washington State in two weeks, then win the Pac-12 title game.

If the season ended today, the Cougars (8-2) would play Colorado (8-2) in the Pac-12 championship game based on their 7-0 Northern Division league mark vs. Washington’s 6-1.

“There is very little separation between teams from two through six in the rankings,” said Kirby Hocutt, chairman of the CFP selection committee.

Washington State will play at Colorado at 12:30 p.m. Saturday (FOX).