Redshirt freshman DJ Beavers has the formidable task of attempting to replace LB Azeem Victor, the Huskies’ top tackler lost for the season with a broken leg, with two regular season games remaining. 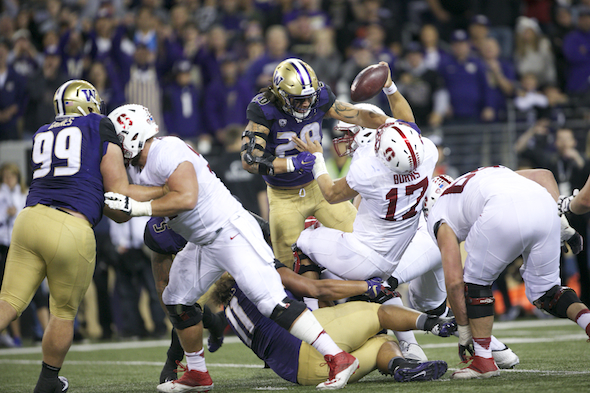 D.J. Beavers received a succinct message from fellow Washington LB Keishawn Bierria when he trotted onto the field to replace Azeem Victor, who was being carted off the field Saturday with a broken leg that ended his season.

It was early in the second quarter against USC. Bierria explained Tuesday that while he was concerned for his teammate, he had to keep the defense focused on the next play.

“At first, (Victor) wasn’t screaming or anything,” Bierria said. “I went over to him, and he was like, ‘I’m not getting up.’ The first thing in my mind is ‘Damn, he’s down. Who’s up next?’

“Making sure I’m there for (Beavers) mentally, because I’ve got the game to come back to. Azeem might be done for the day, but I’ve still got a lot more football to play. I’m feeling for my brother, I’m hurting, but I’ve got to finish this game.”

For Beavers, focus will be crucial in stepping into the role held by Washington’s leading tackler as after Victor underwent surgery Sunday. The six-foot, 215-pound redshirt freshman acquitted himself well in his substitute appearance, recording six tackles, three solo, in the loss.

“D.J. did well,” defensive coordinator Pete Kwiatkowski said Tuesday. “Any time you lose a guy, it’s always a downer. But he went out there with his opportunity and he made the most out of it. I expect him to go out there and perform at a high level.

“Nobody wants to get a position this way, but it is what it is. It’s their opportunity to go out there and show what they can do.”

Beavers, who wasn’t made available to media, hasn’t had much of a chance to show anything behind Victor as the Huskies left opponents battered in a series of blowout wins. Beavers is a step down, but considering before the season many thought Victor would turn pro at the end of the season, that’s hardly surprising.

“He’s got a lot of good reps throughout the season,” Petersen said. “Now he’s going to get a lot more. You don’t think of those guys so much anymore as really young. I know there’s a handful of games where (a) guy’s out (who has) been such a stalwart for different teams. That’s just kind of how it goes.”

Beavers may have a relatively easy first game getting situated against 5-5 Arizona State Saturday (4:30 p.m., FOX). The quarterback situation for the Sun Devils is a mess.

Redshirt sophomore Manny Wilkins has missed several games due to injury, and has thrown three touchdown passes in Pac-12 play. Redshirt freshman Brady White, a backup, had a season-ending injury when he started for Wilkins against UCLA. Following White’s injury, coach Todd Graham had to send in true freshman Dillon Sterling-Cole, who had intended to redshirt, to finish the game.

Toss in a Sun Devils rushing attack that averages 144 yards per game and Beavers figures to have the ideal break-in game as a full-time starter.

Bierria and the other linebackers have been trying to keep the backups ready all season.

“We’ve been telling them all year long: You never know what’s going to happen,” Bierria said. “You never know if they’re going to be starting. I definitely see them getting ready in those reps this week.”

Petersen quipped Monday that few teams, save perhaps for the NFL’s next expansion franchise, Alabama, have the depth to replace losses of star players. Instead, Saturday will come down to how much Beavers and the rest of the linebackers have prepped for the absence of their most aggressive player.