In his third game as a starter, undrafted rookie LT George Rant made no errors vs. the Patriots. Now he looks like the permanent successor to Russell Okung. Only with the Seahawks . . . 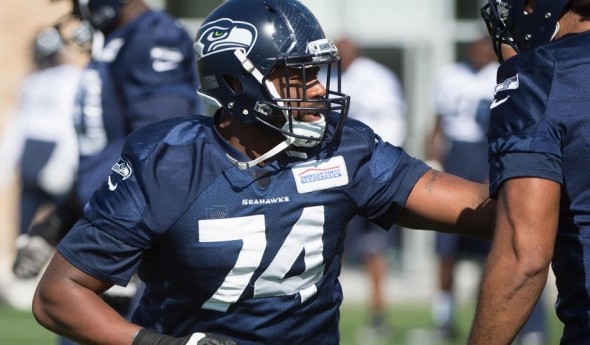 George Fant played college hoops at 260 pounds, but says he feels no different at 305. / Seahawks.com

By now, discerning fans know that the Seahawks have a reputation for drawing from the tired, the poor, the huddled masses yearning to be in the NFL, and finding quality players. Still, this is palm-t0-forehead stuff: According to Pete Carroll, undrafted rookie George Fant, the power forward turned starting left tackle, had no missed assignments Sunday against the Patriots, in the third start of his football life at any level, any position.

“It’s hard for anybody to do that in any position,” said the Seahawks coach Wednesday. “Not that he’s going to never miss an assignment again, but he made it through the game in that regard. That’s the kind of improvement you can count on seeing as these guys keep playing.”

Further, Fant basically has won the position, the second-most important job on the offense.

Line coach Tom Cable said after practice that Bradley Sowell, the original starter who is returning from a sprained knee this week, is competing with incumbent Garry Gilliam at right tackle to start Sunday at the Clink against the 5-4 Philadelphia Eagles.

“George is going to grow” in the position, Cable said. “What we’re trying to do is get the best five guys on the field. That means (having) the right mentality.”

From a standpoint of conventional football thinking, this is another Carroll moment of Looney Toonery. Fant was a three-time all-conference basketball player at Western Kentucky University in his hometown of Bowling Green, and had to be coaxed into taking seriously what NFL scouts were telling him.

“Every other year we’d have a new football coach,” he said in the locker room Wednesday. “They’d always try to get me out to play. They’d joke around. I’d tell them don’t come around. I told them I was wasn’t playing football.

After using up his hoops eligibility, Fant came back for a fifth year to learn this football thing. He had help from teammates, including Tyler Higbee, who’s a rookie backup tight end for the Los Angeles Rams. Fant played in two games, catching one pass on offense and making two tackles on defense.

That’s it. Yet he was assignment-correct against the best team in football on the Sunday night national NFL game.

Remarkable as was the firing Tuesday of leading rusher Christine Michael based in part on a breakout game from a rookie running back, astonishing is the word for the Seahawks finding a starting lineman at midseason from the blue-light table, and thinking he may be the long-term answer for one of the NFL’s best teams.

“To me, the sky is the limit,” Cable said. “Everything about the offensive line is about growth and development. you’re trying to play well in November to get ready for December, and what’s next.

“Our program is about developing and growing. Winning along the way just makes it that much sweeter.”

After his pro day at WKU, Fant was no longer a secret, not after the 6-foot-5, 296-pounder — he played hoops at 250 — ran a 4.83-second 40-yard dash and had a vertical leap of 37 inches (for perspective, one of the great leapers in NBA history, former Sonic David Thompson, was called “Skywalker” for his 42-inch leap).

But no one drafted Fant. They didn’t see the potential.

“We’re really excited that he’s doing as well as we can expect right now, for his understanding and his experience,” Carroll said. “We know that he’s really applying himself and achieving at a high level, and he can get measures better.”

Given how inept the line appeared Oct. 23 in the 6-6 tie with Arizona, Cable marveled how few errors the group had in Foxborough, when the Seahawks produced a season-high 420 yards of offense.

“Cleaner,” he said. “I’m so excited about that word. As we head into the second half (of the season), we have a saying: ‘Let’s do our football right.’ It was clean for the first time — we read it right, we blocked it right, targeted some finishes.

His teammates gradually learned of his no-football background during organized team activities and training camp. What went through your mind when you learned about Fant, Kam Chancellor?

“Athlete,” he said. “I’ve seen it done before. A good athlete is capable of doing anything. You just want to see how fast he can adapt to the system.”

His adaptation started poorly with four penalties in the first half against New Orleans, his first start. Part of the learning curve. He said he lacked patience.

“You watch the Arizona game (when he came in after Sowell’s injury), you see I was really impatient,” explaining how he reached instead of moving his feet. “I do it a little now. But I’m getting better.”

He’s also about the only one in the room that isn’t amazed at his progress.

“I don’t look back,” he said. I don’t look forward. Just going with the flow every day, trying to get better.”

If the Seahawks pull this one off, be warned: Never let Carroll or GM John Schneider near your garage sale. They’ll take spouse and the car and leave you with the crappy lawn furniture.