Thomas Rawls and Troymaine Pope will join C.J. Prosise in the backfield Sunday when the Seahawks deploy a revamped rushing attack against the Eagles at the Clink. 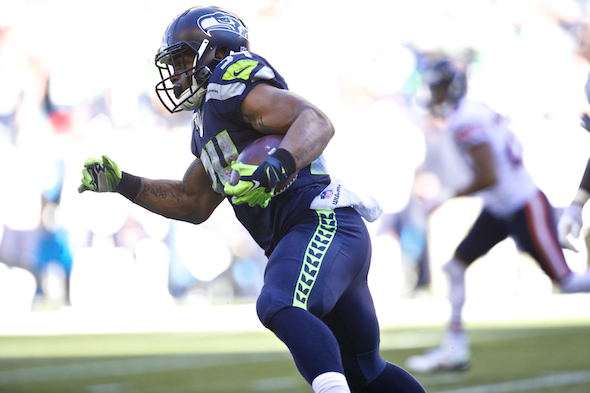 It sounds as if Thomas Rawls and rookie Troymaine Pope will see action Sunday in a revamped rushing attack the Seahawks will roll out against the Philadelphia Eagles at 1:25 p.m. Sunday (FOX), which will also include Garry Gilliam at right tackle.

“I don’t have any problem with playing (Rawls) quite a few plays,” coach Pete Carroll said after practice Friday. “Thomas looked great. He’s ready to play and we’ll see how the rotation goes once we get going, but he’s going to be mixed in right now and there’s no reason why not to play him.

“I’m looking forward to seeing him. He’s obviously really excited. It’s really like a whole new start to the season for him. ”

Meeting the media Thursday, Rawls was amped to return after healing from a fibula fracture in week 2.

“This whole week, my father, my brother, and a lot of my family members, they’ve been texting me the same message lately: ‘Relax. Breathe. It’s OK,’” he said. “Because they know the type of person that I am. I’m a real passionate person. I play with a lot of drive and I live my life like that.”

After cutting leading rusher Christine Michael this week following the successful starting debut of rookie C.J. Prosise in the 31-24 win over New England, the Seahawks filled the vacancy by re-signing the 5-foot-8 Pope, the team’s leading rusher in preseason, when he became a fan favorite. He will on the 46-man active roster and likely play Sunday.

“There’s a really good chance that could happen,” Carroll said. “He had a very good week also. We really like that we have competition at that spot. You have to wait and see on game day what we’re doing there, but we had a good week.”

Also returning to action after injuries are TE Luke Willson (knee) and OT Bradley Sowell (knee), the latter put in competition with Gilliam this week in practice. Sowell has been supplanted at left tackle for now by the remarkable undrafted rookie George Fant. But Carroll indicated Gilliam is safe.

Sowell “really passed the test that he could go,” he said. “He had a good, solid week and really took a really good workload. We’re looking at (right tackle) just to find a chance for Bradley to play there too, as well as the left side. That’s just the way we do it.”

Of Gilliam, Carroll said, “I think he’s doing fine. He came off (a cyst removal in his knee) and it did take him some time to get back where he had his confidence and all his power.”

The only players unavailable for Sunday’s game are DE Michael Bennett (knee) and OLB Kevin Pierre-Louis (hamstring). Carroll said Bennett has a chance to return next week for the game at Tampa Bay, where he played from 2009-12 before the Bucs let him go into free agency.

“We got some guys back on the practice field,” Carroll said. “It was a good lift and fun to see them out there competing and battling.”

The Seahawks are 4.5-point favorites over the 5-4 Eagles, who had lost four of five until beating Atlanta 24-15 Sunday behind the 231 passing yards of rookie QB Carson Wentz, and a defense that held the Falcons, the NFL’s leading offense at 34 points a game, to their lowest total of the season.