Despite a shaky Jake Browning, the Huskies bolted to a 30-0 lead and were never threatened in a 44-18 romp over Arizona State Saturday night. No. 6 UW improved to 10-1. 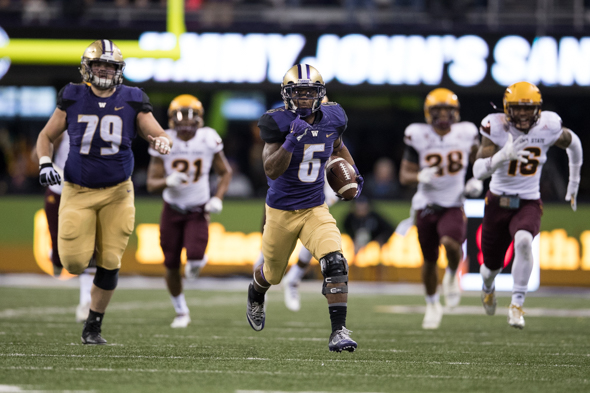 QB Jake Browning recovered from a shaky start that included two interceptions by throwing two touchdown passes as Washington rebounded from its only loss of the season by crushing Arizona State 44-18 Saturday night at Husky Stadium (box). UW snapped a 10-game losing streak to the Sun Devils, beating them for the first time in Seattle since Oct. 4, 1997.

Washington improved to 10-1 overall and 7-1 in Pac-12 play and is tied for the Northern Division lead with Washington State, also 7-1. The Cougars (8-3, 7-1) lost to Colorado 38-24 Saturday in Boulder. The winner of the Apple Cup Friday in Pullman will represent the North in the Pac-12 Conference championship game.

Washington, No. 6 in the College Football Rankings (No. 7 according to the Associated Press and coaches polls), has a chance to to move up a notch next week since No. 5 Louisville dropped a 36-10 decision to Houston Thursday. The other teams ranked ahead of the Huskies — No. 1 Alabama, No. 2 Ohio State, No. 3 Michigan and No. 4 Clemson — all won Saturday.

Browning threw a screen pass that WR Chico McClatcher took 75 yards for a TD, threw a 46-yard TD to Dante Pettis and directed three more scoring drives that resulted in Cameron Van Winkle field goals. Washington had a 30-0 lead before the Sun Devils got anything going offensively. The Huskies put a cork in it when LB Keishawn Bierria returned an onside kick 45 yards for a touchdown with 6:03 remaining.

Early in the second quarter, Browning threw an interception that ASU LB Koron Crump returned 62 yards for an apparent touchdown. But the TD, which would have given the Sun Devils a 7-3 lead, was wiped out on an illegal block by CB Maurice Chandler, who nailed Browning in the back on the return. Arizona State still had first-and-goal, but Washington CB Kevin King made a spectacular, one-handed interception in the end zone.

Two plays later, Browning threw the short pass that McClatcher took to the house, and the rout was on.

RB Myles Gaskin, who became a 1,000-yard rusher last week against the Trojans, had 127 yards, 45 coming on a touchdown run early in the fourth quarter. RB Lavon Coleman supplemented with 47 yards, including a 3-yard TD.

Washington amassed 539 yards of total offense despite going only 4-for-12 on third-down attempts.

The Huskies gave up 18 late points, including two touchdown passes from QB Manny Wilkins to WR Jay Jay Wilson — but held the Sun Devils to 245 yards, including 15 rushing, and recorded six sacks.

The Huskies did their best work when Arizona State faced third down. UW held the Sun Devils to 1-for-13.

“We got a win and we’re always pleased with that. But we’ve got some things that we need to clean up. Washington State is a heckuva team. It will be a great game.” — UW coach Chris Petersen

The Huskies travel to Pullman for a Friday Apple Cup matchup with Washington State at 12:30 p.m. (FOX).