Dropped passes and other errors by Washington State allowed Colorado to run away in the second half for a 38-24 win. The Buffs ran off 100 plays and gained 602 yards. 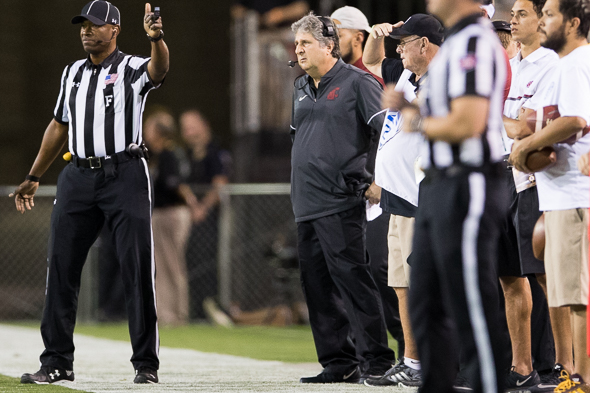 Mike Leach’s Cougars had a shot at the upset in Colorado. / Drew McKenzie, Sportspress Northwest file

Looking to extend an eight-game winning streak, No. 20 Washington State (8-3, 7-1 Pac-12) instead had its first error-prone Saturday in more than two months. Dropped passes? Check. Missed tackles? Check. Failing to get off the field on third down? Check.

“We had our chances,” WSU coach Mike Leach said during the post-game show on 710 ESPN radio. “We dropped too many balls. We misfired on too many (passes). We could have gotten more yards in the run game, I thought. Defensively, we couldn’t get them off the field for most of the second half.”

It marked WSU’s first loss in conference play after the rebound from an 0-2 start that prompted Leach to compare the Cougars to a junior varsity softball team following a loss to Boise State.

It also nullified whatever minuscule odds the Cougars had of sneaking into the College Football Playoff.

Leach, though, fell well short of another tirade. He simply acknowledged that WSU didn’t execute well after beating Arizona and Cal by a combined score of 125-28 the previous two weeks.

“You got to play with all 11,” Leach said, using one of his favorite Leach-isms. “We spent too many snaps today playing with nine.”

WSU can still win the Pac-12 North with a win in Friday’s Apple Cup, regardless of how
No. 7 Washington fares Saturday night against Arizona State.

“It’s a short week, so you got to move on,” QB Luke Falk said. “Really, we got to put this one behind us, learn from it, but we got move on. We got bigger things ahead.”

The Cougars will want to forget this one quickly.

Using the zone-read play, Colorado QB Sefo Liufao, a Tacoma native, gashed WSU on the ground and through the air. Liufao went 27 of 41 for 345 passing yards and rushed 23 times for 108 yards and three touchdowns.

“(Liufao’s) good at carrying the ball,” Leach said. “Kind of a power guy. There’s better passers, but the thing is he does keep (the play) alive.”

Still, the Cougars looked capable of pulling off the upset, leading 14-7 early in the secon quarter. But fifth-year senior Gabe Marks dropped a touchdown pass that would have staked WSU a two-score advantage. WSU turned it over on downs, then Colorado responded with a 10-play, 74-yard drive capped with a three-yard touchdown run from Liufao.

The lead changed four more times, with Colorado taking it for good with 30 seconds remaining in the third quarter when Liufao ran it in from 11 yards out for a 28-24 lead. The Cougars stalled on their next drive in the red zone, opting to go for it on fourth and four and falling about a yard short when WR Kyle Sweet, starting in place of the injured River Cracraft, was tackled out of bounds.

WSU rushed 22 times for 137 yards, its seventh 100-yard rushing game of the season. Falk upped his passing touchdown total this season to 36, second most in WSU single-season history.

“They’re a good defense, but really, it’s on us,” Falk said. “We moved the ball around pretty dang good today but we just couldn’t execute in those key situations. Really, we’re going to look at this film and we’re going to see a bunch of plays, just a bunch of meat
that’s left on the table.

“Hats off to them. You can’t take any credit away from them, but we just didn’t play our best today.”