The Huskies stumbled early but exploded on Arizona State after a stellar interception by CB Kevin King for an easy win. Now comes the fun stuff — the Apple Cup in Pullman. 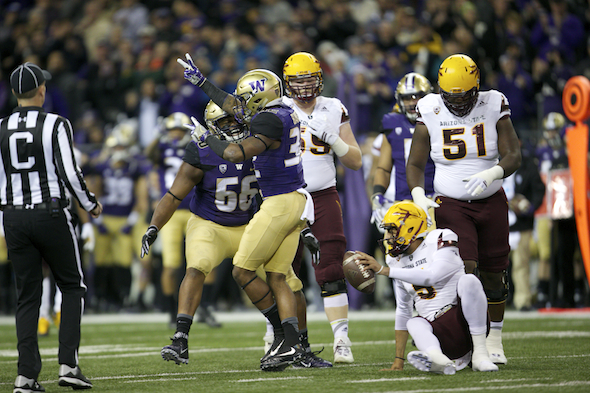 Lost amid the general exuberance that followed consecutive blastings of rivals Oregon and Stanford earlier in the season was the fact that the Washington Huskies had lost the past 10 consecutive games against Arizona State, going back five head coaches ago.

Watching the Sun Devils accumulate three first downs and 43 yards of offense in the first half Saturday,  it was hard to conjure up how that dour history was possible, given the Huskies’ 24-0 intermission lead despite a lousy first four possessions.

The Huskies were either hung over from the loss to USC that spoiled their perfect season, or looking ahead to Friday’s game of games, the clash of the Northwest titans, the battle that will evoke ecstasy among the victors and lamentations among the losers that will linger for generations.

Y’know, the Apple Cup in Pullman, finally a big deal beyond our little borders here in South Alaska.

Whatever it was early in the game, the 44-18 final score suggested it didn’t matter to anyone at Husky Stadium any more than the persistent dorkiness against the Sun Devils. Bring on the Cougars.

“Now, it’s like everybody hoped it would be,” said Huskies Chris Petersen, except including him, of course. He said he would have preferred to have wrapped things up weeks ago, given his aversion to the non-clinical aspects of football, like rude talk, overwrought anticipation, century-long contempt and flaming bags of dog poop, all rich Apple Cup traditions.

“I know the conference likes it,” he said. “I’d like it done way before.”

If your holiday party needs a little fizz, don’t invite Petersen. He can wipe the smile off Mona Lisa.

But that’s OK. He’s not the state’s highest-paid employee because he can make cute balloon animals. He’s coaches college football well, enough to get the Huskies to 10 wins for the first time since 2000. If they win Friday, Washington will make its debut in the Pac-12 Conference championship game.

The 26-13 defeat last week to USC was a downer, but proved not to be a derailer, despite QB Jake Browning’s second slow start in a row.

“I had some turnovers (two interceptions) and missed some easy throws on third down that cost me in the beginning,” he said. “We get a penalty, a negative play, and those stall us.”

In fact, it looked as if the Huskies were in free fall after Browning’s second pick of the first half was returned by LB Koron Crump 59 yards. It would have been a pick-six but Browning managed to get close enough to Crump to be blocked illegally, nullifying the TD.

After two Sun Devils plays, the Huskies defense returned the blow when CB Kevin King made what might be UW’s defensive play of the season, a leaping, one-handed interception in the end zone that will be a fixture on the TV highlight shows.

“I knew it wasn’t a regular play, but to me it was just something I did,” King said. “Then when I calmed down I was just kind of thinking to myself, ‘Damn, I really did that.

It was hot, too, because it ignited a streak of 27 unanswered points, starting a play later when Browning threw a pass the traveled maybe six yards and was nearly a lateral to WR Chico McClatcher, who took it 75 yards for the Huskies’ first touchdown and a 10-0 lead.

“It was huge,” Petersen said of King’s pick. “Our offense wasn’t doing much, and put our defense in bad situations. That was kind of the saving grace.”

The Huskies’ defense saw to the rest of the evening, smothering overmatched QB Manny Wilkins with six sacks and a second interception. Second-stringers surrendered a couple of late touchdowns, but the element of contest had evaporated.

Now comes the Apple Cup, which draws national interest because the Huskies likely will be the No. 5 team in the next College Football Playoff rankings, which will field a four-team field Dec. 4. To move, up the Huskies need to beat the Cougars, then win the conference title game in Santa Clara against the South Division winner, and hope one among the current top four stumbles.

No. 20-ranked WSU lost Saturday afternoon on the road to Colorado 38-24, which left them 8-3 but still eligible for a division title with a win over the Huskies. It’s been a couple of decades since the Apple Cup mattered nationally. For a change, the Cougars can be something more than a spoiler in the game — they are two wins away from a conference championship.

Given that the 2008 Apple Cup featured a 1-10 Cougars team against an 0-11 Huskies team, the significance of the moment is lost on no football follower in the state.

Petersen was right — it’s what everybody wanted for Thanksgiving, albeit a day later.