The Seahawks cranked up a TD pass from WR Doug Baldwin to QB Russell Wilson, a Clink-record run from C.J. Prosise, but had multiple injuries in a win over Philadelphia Sunday. 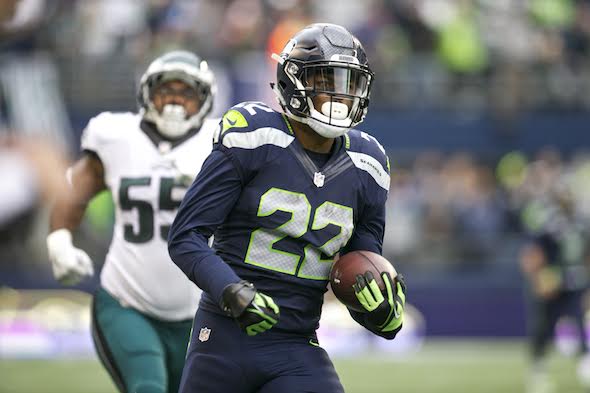 QB Russell Wilson not only threw a touchdown pass, he caught one, a 15-yard thigh-slapper from WR Doug Baldwin in the third quarter, to punctuate the Seahawks’ 26-15 victory over the Philadelphia Eagles Sunday at CenturyLink Field (box). But that was hardly Seattle’s only highlight play — or development — attendant to its third consecutive victory. Mainly, the specter of numerous injuries looms.

The Seahawks improved to 7-2-1 and took a three-game lead in the NFC West over the Arizona Cardinals, who dropped a 30-24 decision to the Minnesota Vikings.

RB Thomas Rawls returned to the lineup  — he hadn’t played since Week 2 at Los Angeles — and shredded the Eagles’ vaunted front seven on limited carries. But he wasn’t even Seattle’s leading rusher on a day when the Seahawks amassed a season-high 152 rushing yards.

That’s because rookie RB C.J. Prosise, before leaving the game with an apparent shoulder injury — “it’s going to be awhile,” said coach Pete Carroll — broke the longest run in CenturyLink history, a 72-yard TD gambol in the first quarter.

Wilson’s TD catch from Baldwin, the first such play by a quarterback in franchise history, set an all-time standard for quirkiness, but was eclipsed by one of the greatest throws of Wilson’s career, an astonishing, across-the-body, line-drive flick while scrambling to his left to TE Jimmy Graham that resulted in a 35-yard touchdown.

The Seahawks gave up a pair of touchdown passes to the much-hyped rookie, QB Carson Wentz, one early, one late, but otherwise stymied him with two interceptions, numerous forced throws, a pair of sacks and a bunch of hits.

The big downside for Seattle: Injuries. CB DeShawn Shead (hamstring), RBs Prosise (shoulder) and Troymaine Pope (high ankle sprain) and FS Earl Thomas (hamstring). The extent of those injuries has yet to be determined.

“It’s a lousy list. We’ll have to see what happens,” said head coach Pete Carroll. “(RB) Alex Collins (inactive Sunday) will have to jump back in there.”

The Seahawks probably have to sign a running back this week, days after waiving leading rusher Christine Michael (claimed by Green Bay). Rookie Alex Collins was on the inactive list Sunday, but healthy.

Trailing 13-7 in the second quarter, Wentz escaped a sack and flipped a short throw to TE Zach Ertz, who busted it for an apparent 57-yard touchdown. But the Eagles were flagged for an illegal formation (WR Nelson Agholor failed to line up properly), nullifying a play that would have given them the lead. From there, Seattle rolled to a 26-7 lead before surrendering a late touchdown and two-point conversion.

Wilson completed 18 of 31 for 272 yards, did not throw an interception, and finished with a 97.8 passer rating while averaging 8.8 yards per completion. On the play to Graham, Wilson dodged traffic, scrambled left and, at the last moment, found Graham, who broke a tackle and ran untouched for a touchdown.

The 10-play, 92-yard drive was the longest by the Seahawks this season.

The TD catch by Wilson, which staked Seattle to a 23-7 lead, was the first by a quarterback in the NFL since Marcus Mariota of Tennessee snatched a 41-yarder against the New York Jets Dec. 13. Wilson flipped to Baldwin on an end-around, kept running to the left as Baldwin looped a back-footed toss to the three yard line where he dove into the end zone.

Prosise, starting at running back for the second consecutive week, had four carries, but unleashed the 72-yard run before departing. Rawls, showing no apparent rust, had 57 on 14 carries and Wilson 19 yards on eight.

Stephen Hauschka kicked a pair of field goals, from 21 and 35 yards, but missed a 3-pointer and had a PAT blocked — the fourth time this season that one of Hauschka’s extra-point attempts was snuffed.

The Seahawks rolled up 439 yards against a Philly defense that entered allowing 323 per game.

The Seahawks held the Eagles to 308 yards, recorded sacks by Bobby Wagner and Cliff Avril (Avril’s 10th of the season) and picked off a pair of passes. Wagner had 15 tackles (five solo) while LB K.J. Wright had 10 (six solo) and SS Kam Chancellor eight (one solo).

The Seahawks did an especially good job on Philadelphia’s wide receivers. Until the early stages of the fourth quarter, Eagles’ WRs had the same amount of yards receiving combined as Wilson — 15.

“Spiral, dropped it in the bucket, Russell made it look pretty.” — Baldwin on his pass to Wilson

“I thought Russell looked really good today. He’s really moving and protecting himself. He looks like he’s back and this is a big shift for us. On the play (Baldwin to Wilson), that was beautifully done, a great throw by Doug. I think we’re turning the corner at the right time.” — Carroll

“We were on it — offense, defense, special teams. We tried to make him (Carson Wentz) as uncomfortable as possible.” — Wagner

Carroll collected the 100th win of his NFL career, becoming the 39th coach to accomplish that feat . . . The Seahawks took the overall lead in the series, 8-7. Seattle has won three in a row from Philly . . . Wilson notched his 53rd career regular-season win, three shy of Matt Ryan’s record of 56 for most in the first five years of a career . . . Wilson is 32-5 at the Clink  . . . The Seahawks have played 88 consecutive regular-season (97 when playoffs are included) with a lead or within one score of the lead in the fourth quarter, an on-going NFL record.