Thiel: Rawls and the return of Seahawks’ ferocity

Return of RB Thomas Rawls ignited the Seahawks offense in ways not seen since, well, when he did it in the second half of the past season. The turn from crappy to happy has begun. 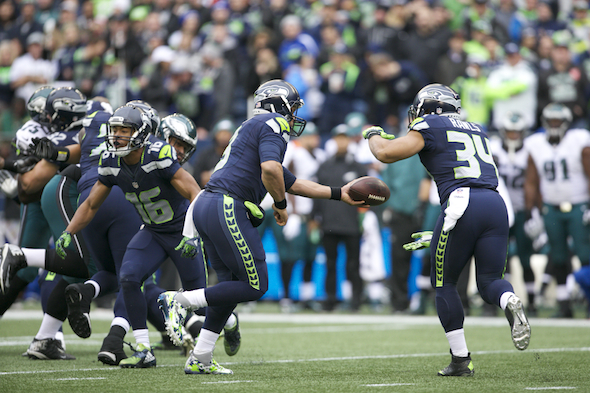 Yes, the Doug Baldwin-to-Russell Wilson TD pass was a laugh riot. But let’s set that aside.

Let’s also set aside for a moment concerns about injuries, the funky red-zone offense, the defense’s third-down mistakes and kicking-game errors. Instead, let’s consider the second-quarter touchdown drive of 92 yards Sunday against the Eagles as it represented how the Seahawks do November/December.

“In the past when we’ve been good, those situations have really not bothered us,” said coach Pete Carroll in the wake of a quirky yet familiar 26-15 win over Philadelphia. “That’s kind of what it showed like today.”

Two false-start penalties set back the Seahawks to second-and-20 and their own eight-yard line. Wilson hit on consecutive passes to WR Jermaine Kearse for 17 yards and TE Jimmy Graham for six. First down.

After an incompletion and a five-yard holding penalty on the Eagles, the Seahawks called on returning RB Thomas Rawls on five consecutive plays  — for rushes of nine, one, 18, three and one yards to reach the Philadelphia 30. But an offensive pass interference penalty cost 10 yards, five of which came back on an Eagles offsides foul.

On third-and-11 at the 35-yard line, Wilson scrambled out of the pocket, bolted left to buy time and, nearly out of bounds, pumped his arm a couple of times, turned his shoulders even with the line of scrimmage sent a fastball that hit Graham 15 yards down along the sideline.

In the clutches of a defender, Graham tore away and weaved through other would-be tacklers for the go-ahead touchdown and a 13-6 lead.

To summarize: The Seahawks overcame three penalties to exploit the talents of three elite players that have been injured and/or recovering most of the season to deliver a length-of-field slash to one of the NFL’s best defenses, via a shocking third-and-11 conversion behind an offensive line whose coherency has sometimes resembled a blender full of doorknobs.

As important to the season as was the previous Sunday’s 31-24 win in New England, the drive against the Eagles was every bit as significant for the perpetually tumultuous offense.

“That was a great accomplishment,” Carroll said. “A crappy situation. We back up once, we back up again, then we go bang-bang. You overcome it. That was a really good drive and really good belief that we can get it done and pull it out.”

Harrowing as it was electric, the Seahawks deployed a crafty passing game and punishing running by Rawls to look almost exactly as they did in the second half of the last season. And really, for the entirety of the Carroll regime, which is now 30-6-1 in the final two months of the regular season.

It’s as if September and October are an extended exhibition season until the Hogwarts students are ready to unleash against the Voldemorts of the NFL.

While Graham and Wilson have shown increasing effectiveness, the mystery was Rawls, out since he broke his fibula in week 2. His uncommon ferocity was close enough to the retired Marshawn Lynch that he requires a special accounting from defenses.

“I thought it was a great first game for him,” said Carroll, who started rookie C.J. Prosise so Rawls wouldn’t feel as much pressure. “He was attacking and getting after it. He’s a marvelous kid. We saw exactly what we wanted to see.”

What they didn’t want to see was the injury to Prosise’s left scapula (shoulder bone), which Carroll indicated will keep him out “for a while.” He left after four carries, so Rawls had to go for about 40 snaps, which included 14 carries for 57 yards and three catches for 31 yards.

The second-quarter drive’s five consecutive runs was something Carroll loves to do with a running back, but couldn’t with former Seahawk Christine Michael, and at least not yet with Prosise.

“I don’t think that was the game plan, but whatever it takes,” Rawls said, still giddy nearly an hour after the game. “You know me, I’m going to get fired up after a one-yard run. I want that energy to not just run through this team but throughout this stadium as well.

“That’s one of my main goals: To bring, that energy, passion and drive to the running back position.”

That’s what Lynch so often brought. Rawls is not near Lynch’s polished skills and cleverness, and is a far different personality, but he is the kind of load that makes defenders cringe.

As C Justin Britt explained: “He looks for contact instead of trying to juke you out, just like when Marshawn was here. I love blocking for that type of person; someone who’s going to sacrifice their body no matter what’s going on with themselves.

“Makes us want to do the same for them.”

The partial result was to follow the season high of 420 yards of total offense against the Patriots with 439 against the Eagles and an average gain per play of seven yards. It’s hardly perfect, not with the red zone stalls that plagued both games. But it is not nearly the crisis mode that developed after the 6-6 tie with Arizona.

That was October. Now it’s November. The days are shorter, the games are bigger, the boys are becoming men. And the Seahawks have had no turnovers in six of the past seven games.