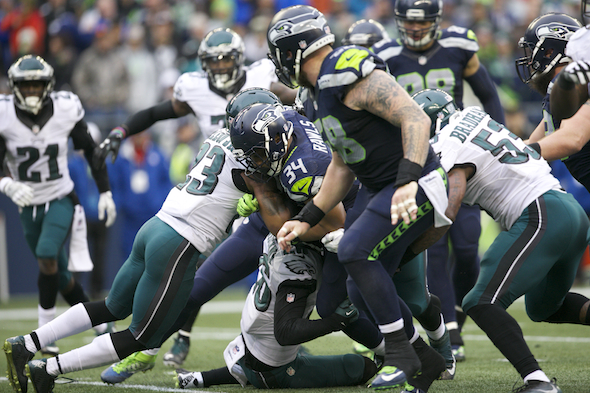 RB Thomas Rawls “was like a train wreck” after his first game in two months, but coach Pete Carroll said Rawls would be ready Sunday. / Drew Sellers, Sportspress Northwest

Just when things get going, things get gone. In the mash-up with the Eagles that Seattle won 26-15 Sunday, the Seahawks were down two running backs and two defensive backs. In addition, the first NFL contact in two months for RB Thomas Rawls left him feeling “like a train wreck.”

That was according to coach Pete Carroll, who said Monday that they may be on the hunt for outside help with the offense even after its most productive day of the season.

“I don’t know why — it’s amazing to see,” he said of the injury rate, which as many as 17 players combined may have left the game at least for awhile. “A week ago (after the game in New England),  I mentioned we had come out with one turned ankle. It’s just unusual; crazy day in the league.”

Rookie RB C.J. Prosise, who started and ran for 76 yards in four carries, including a 72-yard touchdown blast, has a fractured scapula. NFL.com had a report saying it was four to six weeks, which could be the rest of the regular season. Carroll wasn’t as specific, but said no surgery would be involved.

Prosise’s fellow rookie, Troymaine Pope, carried twice for three yards before a high ankle sprain took him out. The plan was for Pope to help run out the fourth quarter to rest Rawls, but that didn’t work, and he could be lost for several weeks.

That leaves Rawls and another rookie, fifth-round pick Alex Collins, the only able-bodied running backs on the roster. Carroll said undrafted rookie George Farmer, a converted defensive back from USC who played respectably in the preseason, is “a prospect” to be elevated from the practice squad.

Or they may go scavenging in the personnel bazaar. Anyone remember Bryce Brown from last season?

At least Carroll was thrilled with the return of Rawls, who gained 57 yards in 14 carries and caught three passes for 31 yards.

“He’s banged up now — he threw his body around, he was like in a train wreck,” he said. “This is his first real contact and he legitimately got after it. He’s a little bit trashed today.

“He played great and he looked terrific. A little out of control a couple times, but he’s going to be on the verge of being out of control if he’s at his best anyways, so that’s just fine with us. We look to get him back by Sunday.”

That would be in Tampa Bay, where the Seahawks will play the Bucs probably without FS Earl Thomas and CB DeShawn Shead. Both came away with strained hamstrings rated at grade one, the mildest category, but typically require at least 10 to 14 days .Carroll wasn’t ruling either out.

“There’s nobody less normal than Earl and Shead,” he said, laughing. “Those guys are rare guys, so we’ll see what happens, see if they adapt.”

If they can’t play, the likeliest to fill in are CB Neiko Thorpe, signed Sept. 13 after being cut by Indianapolis, and FS/CB Steven Terrell, a two-year special-teamer in Seattle.

Even though Collins wasn’t on the active list Sunday, Carroll said he was happy with his progress, saying he lost weight and is better conditioned than in preseason: “Alex has really done some marvelous stuff.  He’s really healthy and ready for the challenge. I really feel comfortable with him fitting in our offense.”. . . DE Michael Bennett (knee) will try to make it back to play against his first pro team, but Carroll wasn’t sure  . . . Rookie LT George Fant missed 10 plays with a sore shoulder but should be back Sunday: “He’s responded very well. We have to wait and see a little bit.”