Road trip! Leach ready to jump in with Petersen

Cougars coach Mike Leach said he would like to join his UW counterpart Chris Petersen for a road trip, after Petersen said he would bring Leach along for the theoretical drive. 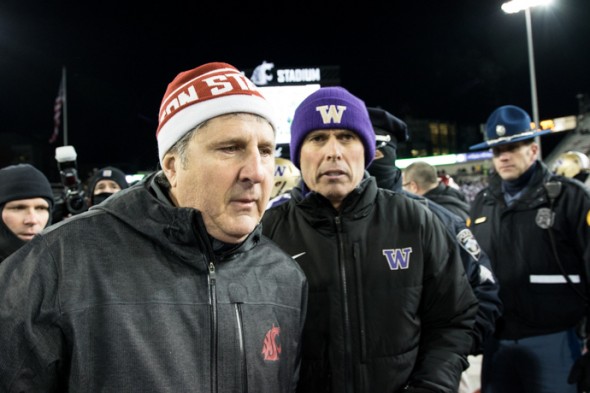 Neither Mike Leach or Chris Petersen wants to kick up too much of a fuss about Friday’s Apple Cup. While fans are salivating at the match-up of No. 6 Washington (10-1) and No. 23 Washington State (8-3), the head coaches have barred the media from speaking to their players. Instead, Leach had fun discussing how a theoretical road trip with Petersen might go, expressing his respect for Washington’s head coach.

The football side of Leach’s press conference contained no surprises. He expressed respect for Washington’s success, said his team was approaching it like any other game, and that Friday’s contest (12:30 p.m., FOX) would be a good challenge for his team; the usual for any sports interview.

Thankfully, the question of a road trip with Washington’s coach lent Monday’s dish some fresh seasoning.

The topic came up after Leach was asked how he would feel about taking a road trip with Petersen. Petersen said in a short ESPN video that Leach would be one of three people that he would bring on a road trip, if he could choose anyone:

It’s a long road to the College Football Playoff.

Who would these coaches want to road trip with? pic.twitter.com/CTrTPlWIvO

“He’d do all the driving,” Leach said. “Very reliable, seems very responsible. Like a lot of us, I grew up with my parents telling me, ‘Why can’t you be more like a guy like Chris Petersen?’ But I do think it’d be a fun road trip. He’s got a great sense of humor, he’s a fun guy to talk to.”

The issue generated more interest from Leach than talk about a week of football practice. Questions followed. Why let Petersen do all the driving?

“One, I don’t get car-sick,” Leach explained. “Two, I would be able to read and look out the window. Chris strikes me as a guy who wants to stay occupied and doesn’t mind having the wheel. If all of a sudden he got boring or something, I could entertain myself and wouldn’t have the responsibility of driving. I could read a book, do Spanish on my phone.

“I could select the radio channels because he’d have to have his hands on the wheel. I could turn the button on the radio dial quicker than he could. I just see more benefits to that.”

In a week where the coaches hope to reveal as little as possible, Leach’s comments at least help personalize the two different personalities at the helm of each program, and disclose  a little of what he sees in Petersen.

Where would this car be heading?

“We’d have to discuss that,” Leach said. “Probably somewhere a not-really-remote place. Somewhere where there’s some action going on, because when Chris loosens up and engages and starts laughing in free conversation, he’s a lot of fun. We’d want to draw that out of him for sure. And then we could all talk about it and have a jolly old time.”

For now, the only trip on the books is Washington’s to Pullman for the Pac-12 North title.