Cougars coach Mike Leach says and does stuff that Chris Petersen wouldn’t dream of emulating. Yet the Huskies coach loves to hang with the Screw-Loose of of the Palouse. 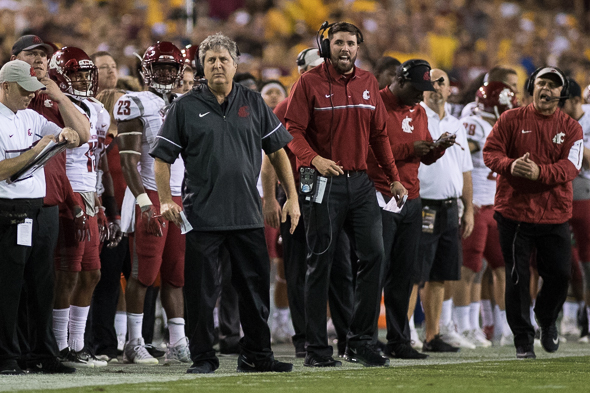 When Mike Leach was coaching the offensive line at Iowa Wesleyan College nearly 30 years ago under his mentor and friend, head coach Hal Mumme, he was also the sports information director for the 600-student school in Mount Pleasant, IA. He was good at it, getting mentions for what would become the Air Raid offense in regional papers as well as USA Today.

Leach responded by saying he believed her office “couldn’t get Iowa Wesleyan College into USA Today unless there was a mass murder.”

Leach was suspended from campus for three days.

Perhaps that was the beginning of his long, tempestuous relationship with authority, as chronicled in the new book by S.C. Gwynne, The Perfect Pass: American Genius and the Reinvention of Football.

Many years later, when Leach and the Air Raid came to prominence at Texas Tech University, a video was made of Leach’s locker-room tirade when he believed the Red Raiders had under-performed against Baylor.

This was the source of his “F— you, f— me, f— everybody” rant that rocketed Leach into the Lee Elia/Tommy Lasorda/Mike Gundy pantheon of sports figures Free of Fear of Recording Devices.

If you’re in the office or in polite company, headphones are recommended for the accompanying audio:

So it was with great amusement that I learned that Huskies coach Chris Petersen said in an ESPN video feature that Leach was among the coaches with whom he would like to take a road trip.

This year alone as head football coach at Washington State University, Leach likened his  football team after an 0-2 start to a “JC softball team,” called out the Pullman Police Dept. for discriminating against his football players,  and was fined $10,000 by the Pac-12 Conference (which he passive-aggressively mocked) after saying Arizona State University coach Todd Graham was a signal-stealing cheater, which Graham later told Leach, to his face, that the claim was “chickenshit.”

If you’ve paid attention at all to Petersen in his first three years in charge of the Huskies, you know he wouldn’t get within a continent of such remarks and actions. Leach understands that, too, which is why his nickname for Petersen is, “The Bishop.”

But that doesn’t mean Petersen doesn’t enjoy hanging with the Screw-Loose of the Palouse.

“He’s entertaining, there’s no doubt about it,” Petersen said. “I really like being around him, because half the time I don’t have a clue what he’s talking about, and the other half I think is really funny.”

Petersen sounds a bit like the little brother who admires the older brother who gets away with crap that mom and dad would never let the youngster do. Petersen has always colored within the lines but perhaps secretly wishes he could go all Salvador Dali like Leach.

Looking across the breadth of Leach’s surreal landscape, he certainly qualifies as a subversive.

Would you agree, coach Pete?

His football reflects a lifetime of iconoclasm. Leach’s pass first-second-third-fourth Air Raid, which has roots with Mumme’s offense at the University of Kentucky as well as with coaching legends Bill Walsh and Mouse Davis, was the counter to the run-first tradition of large men slugging each other every three yards.

Leach’s novel ideas include the wide spacing of offensive linemen, who almost always work from two-point stances; a horizontal passing game to complement use of four vertical routes; and a simplified playbook that relies on receivers determining their routes based on the defensive alignment after the snap.

The developments have found their way into the mainstream. Maybe not all at once, but even Petersen admits to stealing bits and pieces at Boise State and Washington.

“We do,” he said. “I think everybody has some elements of what they do in the pass game. The routes that they put out there aren’t unique to just them. I think it’s how the whole system fits together — how he teaches it, how they game-plan.

“They’ve been doing the same stuff for a long time. He’s unique in his approach of his system. He’s trimmed and streamlined and they have (the system) completely dialed. He believes you score points and move the ball, and for his system, he’s right.”

Advocates of the Air Raid say it allows teams of lesser talent to stay with and beat superior foes because, when done well, it exhausts defenses mentally and physically. Few teams can practice it with scout teams.

“It’s so different,” Petersen said. “I think probably even simulating in practice is not the same thing, which is kind of unique. You think, ‘Hey, four wide and they’re throwing it and spreading out the field.’

“They operate with so much precision that that’s really what makes the difference.”

Petersen hasn’t been too perplexed. He’s won his first two Apple Cups against Leach, 31-13 and 45-10. The fifth-ranked Huskies are six-point favorites over the No. 23 Cougars for the 109th renewal Friday at 12:30 p.m. amid the lentil fields. And the Huskies have won six of the past seven by a combined average of 34-15.

It’s just the kind of mainstream establishment domination that Leach likes to spoil, particularly against a big brother that doesn’t understand him half the time.