Huskies move to No. 5 in college playoff rankings

After Louisville’s loss to Houston, the Washington Huskies (10-1) advanced one spot to No. 5 in the College Football Playoff rankings released Tuesday. 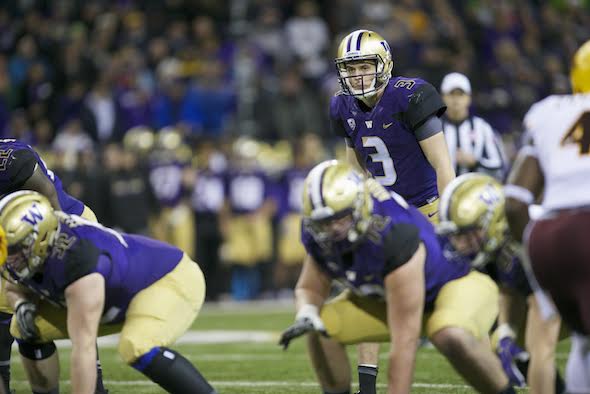 Jake Browning and the Washington Huskies are No. 5 in this week’s College Football Playoff rankings. / Drew Sellers, Sportspress Northwest

A 44-18 winner over Arizona State Saturday, the Washington Huskies (10-1 overall, 7-1 Pac-12), advanced one spot to No. 5 in the College Football Playoff rankings released Tuesday. The top four teams in the final CFP poll Dec. 4 will play Dec. 31 at the Peach Bowl in Atlanta and the Fiesta Bowl in Tempe, AZ. The winners face off Jan. 9 in Tampa for the national championship.

Washington’s rise was made possible by Louisville’s loss to the University of Houston Thursday. Louisville was No. 5 last week and fell to No. 11.

Washington, No. 6 in the latest Associated Press poll and No. 5 in the coaches poll,  were fifth in the first CFP rankings three weeks ago, moved to No. 4 a week later after a 66-27 win over California, and fell two spots last week after dropping a 26-13 decision to No. 20 USC.

Washington’s strength of schedule — the Huskies opened with cheeseballs Rutgers, Idaho, Portland State — will haunt the Huskies if they don’t win out, and perhaps even if they do.

“We spent a lot of time on teams two through five and there is not a lot of separation there,” said Kirby Hocutt, athletics director at Texas Tech and chairman of the CFP selection committee. “Washington has two top-25 wins, but the strength of schedule is not there.”

Michigan plays Ohio State and Alabama plays Auburn Saturday, rivalry games that could play havoc with the rankings.  The drama for Washington fans is whether one of several two-loss teams with better schedule strength might vault a one-loss Washington team in the final accounting.

Utah, No. 12 last week, fell to No. 22 after losing to Oregon in Salt Lake City. The Utes play Colorado Saturday. Washington State fell one spot to No. 23 after losing to the Buffaloes. Stanford remained at No. 24 after beating Cal.

The Huskies and Cougars play for the Pac-12 Northern Division title Saturday in Pullman (12:30 p.m., FOX). The winner plays the Southern Division champ Dec. 2 for the conference title in Santa Clara, CA.